The life of “Dandy” Jack Donovan, which ended Saturday, November 27, 2004, just after his 76th birthday, is one full of tall tales and the happenstance that make pro wrestling such a fascinating subject.

Take, for instance, his first major baptism in the wrestling business, assigned by Atlanta promoter Paul Jones to shepherd the one and only Gorgeous George from town to town in 1956. The Human Orchid had a serious drinking problem, and had to have a minder to get from town to town. Donovan did it for five months before he couldn’t take it any more. 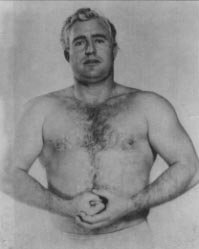 “I don’t care where you went or how close you watched him. That man could get whiskey somewhere,” he told Scott Teal in Whatever Happened To … in 1996. “I never have drank, so it was hard for me to understand.”

Or there was his marriage to woman wrestler Verne Bottoms (which ended in 1973). They would serve as manager for each other’s matches. In his book, Whatever Happened to Gorgeous George?, Joe Jares showed the dedication that the husband-wife team went to for the business. “In Austin, Tex., in 1964, Verne Bottoms met Maria DeLeon in a grudge match. The loser was to be tarred and feathered. Wrestler Jack Donovan, Verne’s husband, was her ringside second and at a crucial point in the match he jumped up on the apron, swung at DeLeon and accidentally hit his wife instead, enabling DeLeon to win. Bottoms was so mad she dumped the pail of tar over Donovan’s head and DeLeon added the feathers.”

Or there was his broken ankle in the early ’70s in Oklahoma that resulted in jobber Dale Hey’s promotion into the Hollywood Blond tag team with Jerry Brown — a role that had been intended for Dandy Jack.

Donovan was the passenger in the car when Terry Funk wrecked his blue ’65 Ford Mustang hatchback in Canyon, Texas. On his web site, Dory Funk Jr. explained the result of the crash that left both wrestlers okay physically. “Thirty seconds passed as Terry contemplated how close they had come to serious injury. His next thoughts concerned the wrestling business. Even though he wasn’t wrestling against Donovan that night, territory rules were that Jack Donovan and Terry were not supposed to be seen together. Terry said to Donovan, ‘Quick Jack, you have got to get out of here before someone sees us. Jack get out of here. You have got to disappear.’ Now at least a minute had passed with Donovan showing no signs of injury. Terry said, ‘Go, Go, You are a heel in the territory. Get out of here before someone sees you.’ Jack Donovan looked at Terry then reached up, grabbed his shoulder and said, ‘Oh, I have injured my shoulder. Get me a doctor.’ Donovan wasn’t going anywhere but to the hospital in Canyon, and the whole town would know the two were riding together.” Terry called his mother-in-law and borrowed her car, leaving Donovan at the hospital so he could make the next town for his match.

But the tale that comes up again and again is Donovan’s feud with the legendary Danny Hodge in Oklahoma. As a tag team with “Handsome” Ron Reed (later Buddy Colt), Dandy Jack had lost to Hodge in a singles bout. Reed, who had been handcuffed and chained to the ringpost, was released following the loss, and hit Hodge in the ring with the chain.

“Within ten seconds, there must have been a hundred people in the ring,” Colt recalled in the Cauliflower Alley Club newsletter in August 2004. “Somebody came into the ring swinging a knife. I had about a four-foot length of chain around my fist, so I was swinging it at the guy, trying to keep him away from me. Finally, all the cops and the other wrestlers came out and cleared the ring. But there was Danny Hodge and Jack lying in the ring. Both of them had their legs and their rear ends slashed wide open. The guy came in to save Danny, but got excited and cut both of them.”

In a Whatever Happened To … interview, Hodge said that he got 140 stitches in his leg. “They thought they were getting [Donovan] … all they saw was legs. They cut Jack down the leg and cut me across the leg. My muscles were all cut in two. His were cut down.”

Donovan was born Jack Dunnavant on November 24, 1928 in Ozark, Alabama. He was into baseball and basketball in high school, and went to the University of Florida for veterinarian medicine on the G.I. Bill with a stint in the Air National Guard. At Florida, Donovan was on the wrestling team, and caught the eye of pro promoters Paul Jones and Don McIntyre. In the early 1950s, he started as a referee, and began wrestling under his real name. He became a bleached-blond heel in West Virginia for Ace Freeman, in part inspired by his time taking care of Gorgeous George. After stints in Florida, Tennessee and Atlanta, he became “Dandy” Jack in Oklahoma for Leroy McGuirk.

In his autobiography, Jack Brisco called Donovan and Reed perfect heels. “They had slicked-back bleached blond hair and a lady manager, Verne Bottoms, Jack’s wife at the time. Jerry [Brisco] and I thought we hit the big time. Jack and Ronnie had defeated Chati Yokuchi and Chuck Karbo for the United States tag team championship so they were definitely at the top, and by working with them so were we.”

Donovan wrestled and managed until 1979, when he worked his last match. He ran a painting company for the last few decades, aided by his second wife Shirley, and served as music director at various churches. He was honored by his peers at the Cauliflower Alley Club reunion in April 1999 in Newton, Iowa.

In a June 2004 interview with SLAM! Wrestling after the death of Jimmy Brawner (Kurt Von Brauner), Donovan, then 75, was rather melancholy. “We’re losing four, five, six people a year … it sort of gets my attention,” he admitted. He had already had a bout with lymphoma cancer in 1988, then would undergo a successful triple bypass surgery just a few months ago.

On Saturday, November 27, he died in a freak construction accident, falling off a ladder. He was killed instantly.

Donovan was a master of his craft as a heel, but modest, giving props to the Von Brauners. “I found it very hard to follow them,” he said in June of the hated German team. “I never felt he was competitive to me because I was a heel and [Brawner] was a heel.”