Starrcade: Gone but not forgotten

CHARLOTTE – Before WrestleMania, there was Starrcade, and there could be no better way to remember one of pro wrestling’s signature events than to reunite the legends of the annual Thanksgiving spectaculars.

A bevy of Starrcade performers, including three former NWA heavyweight champions, were the main event at the Mid-Atlantic Legends Fanfest held this past weekend. While the death of World Championship Wrestling meant that the last Starrcade was held in 2000, fans and wrestlers appreciated the opportunity to reminisce about the days when Starrcade regularly attracted packed houses at venues in places like Greensboro, N.C. and Atlanta. 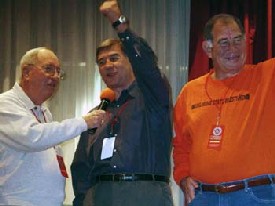 Jerry and Jack Brisco are interviewed by Bob Caudle. Photo by Steven Johnson

“It’s great to be here and remember those days,” said Rocky Kernodle, who was on the 1984 and 1986 cards. “Starrcade is the one event that everybody waited for all year.”

“You had to pick it up. That’s what the competition was here in the Mid-Atlantic,” said Jerry Brisco, who with older brother Jack held the NWA world tag team championship at the time of Starrcade 1983. “You look back and it’s like a ‘Who’s Who’ of professional wrestling … Everybody was just shooting to the top at that time.”

The attendance at the event was significantly lower than the 1,000-plus at the first Mid-Atlantic fanfest in January. Crowd estimates were in the range of 300 people, which is closer to the number of attendees at Price’s NWA fanfest last August. On the other hand, the atmosphere was more relaxed, and allowed considerable time for fans to mix and mingle with their heroes.

The weekend included four separate question-and-answer sessions with Valentine, Paul Jones, Brisco and his brother Jerry, and Race. Those forums were among the most interesting happenings of the weekend, with the Briscos captivating fans during a two-hour session Saturday night.

The Briscos are remembered for their work in the semi-final event at the first Starrcade in 1983 — working as heels, they lost the NWA tag belts to Jay Youngblood and Steamboat in a heated program. “We had just a wonderful time wrestling with them because they were so terrific, and it’s one of the highlights of my life,” Jack said.

The Briscos also explained how they played a part in changing the face of modern pro wrestling by selling their shares of Georgia Championship Wrestling to Vince McMahon’s WWWF in 1984, which hastened the national expansion of McMahon’s endeavor. Ole Anderson, another principal in the Georgia promotion, has harshly criticized the Briscos for their actions and laid out his version of the transaction in his 2003 autobiography. Jerry, an agent with the now-WWE, branded Anderson’s account as “fiction.”

“We knew the business was going toward Vince’s way … he had all the top talent and all the smaller territories were suffering at that time,” Jack added. “We saw the handwriting on the wall.” Asked in a follow-up question if there was anyone in the business he didn’t like, Jack quickly retorted: “Ole Anderson” to a round of guffaws. Both brothers added they respected Anderson immensely for his ring work. “What’s past is past,” Jerry said.

While Starrcade is just a memory, Jerry, who also plugged the value of independent promotions, urged fans to speak up and tell the WWE what they like and dislike. “You guys don’t realize it. You guys are the voice of the business … so speak up,” he said. In more current news, Jerry said he had recently met with amateur stars Rulon Gardner, Cael Sanderson, and Karam Ibrahim to sound them out on the possibility of turning pro. Gardner, a Mormon, has discounted the idea because of his faith, while the other two plan to continue as amateurs for at least a while, Jerry said. But he was hopeful Ibrahim, a 2004 Olympic gold medalist for Egypt who is described as incredibly charismatic, will sign on with the WWE within a few years.

In his forum, Race offered a fascinating tidbit about the Starrcade 1983, when Ric Flair beat him in a cage match for the NWA world title. Flair swiped Race’s entrance music — the theme to 2001: A Space Odyssey — at that extravaganza. “Flair comes out to my music,” Race, an eight-time NWA champion chuckled. “Flair figured, ‘He ain’t gonna be around any more, so it’s mine.’ ”

A number of fans were delighted by the presence of the 74-year-old Hawk, who flew to Charlotte from his home in Hereford, Tex. A devastating heel in tandem with Swede Hanson, Hawk kept fans in stitches with tales of the road, including a long-ago announcement in a locker room that he planned to shoot a promoter who had shortchanged him $600. “I had my gun and I was perfectly serious,” he said. “But I got my money.”

Coincidentally, Hawk, who also was a booker in the Mid-Atlantic territory, was responsible for bringing Jerry Brisco to the Carolinas. “Rip is kind of my mentor in the business and a guy that I really look up to,” Jerry said.

Two more fanfests are on the horizon, Price said — one in Atlanta in April, and another go-round for Charlotte next November.