It has often been said that there is a twin out there somewhere for everyone. In the case of Jimmy Brawner, who died Friday, June 4, 2004, from a stroke, he was lucky enough to find his ‘twin’ in Hamilton’s Doug Donovan, enabling them to create the heat-generating German tag team of Kurt and Karl Von Brauner.

They got together in January 1960 in Tennessee. Brawner was from legit German heritage, and was often overheard by fans speaking German. Within a short while of their teaming, they were on top, and stayed that way in territory after territory. 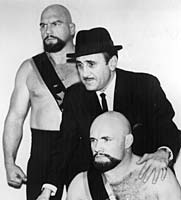 With manager ‘Gentleman’ Saul Weingeroff at their side, the bald-headed Von Brauners had an extra weapon in their arsenal, someone that the fans truly despised, even when they were pitted against other heel teams. Spewing anti-American rhetoric and relying on Weingeroff’s interference with his cane, they wreaked havoc and drew hatred.

Dick Steinborn had wrestled Red and Doug Donovan in the Carolinas before heading to Houston to work for Paul Boesch. On his way to Houston, he ran into Jimmy Brawner in Louisiana and said: “I saw your twin in Charlotte (Doug Donovan). He looks like your twin.”

A few weeks later, Steinborn headed back east and stopped in Nashville, Tenn. to see Saul Weingeroff. There on the couch sat the Von Brauners, heads shaved. “These guys would shoot with you. They liked to test you” Steinborn recalled. “‘When you pin me,’ he [Jimmy] would say, ‘shoot to hold me down.'”

As part of the Interns tag team with Joe Turner, Bill Bowman worked against the Von Brauners in Tennessee, and later in Florida. “They were a strong and dedicated team that was ‘heat driven,'” he recalled.

Cowboy Bob Kelly first saw the Von Brauners in Louisville, Ky. “My opinion is when they had Saul as a manager they were the best tag team in the world at that time. They got the heat by wrestling, working holds, tagging in and out a lot. Then they looked so much alike, when Saul would get the referee’s attention they could switch. Everything they did was just so smooth,” he said.

“The crowd reaction that I saw was, they would have a near riot every night and the heat was on them not the referee or the promotion. They were second only to Rip Tyler and Eddie Sullivan (who came along later) as the best tag team I ever saw,” said Kelly, who was a wrestler and a referee.

Steinborn agreed in a posting on the Georgia Wrestling History web site. “Later they came to Florida and believe me they were one of the best teams in the business. In my book, there were about 5 teams that knew the business well. Along with the Assassins, I consider the Von Brauners up on that level,” he wrote.

In Scott Teal’s Whatever Happened To? newsletter, Tom Jones (who would later be a football star and ‘The Emperor’ in wrestling) recalled being a fan at ringside in Indianapolis. “The Von Brauners had a way of walking out where you just wanted to get up and kill ’em. They were good heels. I was just a mark. I didn’t weigh 200 pounds. I think I weighed about 195 pounds. (laughs). I took a shot at. I think it was Karl. I hit him and out the door I went. I mean, I was gone. Two years later, I’m in the business, right?. He walks in the dressing room and I looked up. ‘Oh, God. He’s gonna kill me.’ I turned my back around and started stringing my boots up. He walked by and set his bags down, then sat down and stared at me. I wouldn’t look up. Finally, he got up, put his hand under my chin, raised my head up, and says, ‘I know you.’ I blurted out, ‘Man, I was just a mark. I’m sorry.’ (laughs). He laughed and said, ‘You did a good job there, kid.'”

Over the years, the Von Brauners were booked by Nick Gulas, which meant that the other promoters had to pay Gulas a booking fee to use them.

Dandy Jack Donovan was another heel in most of the places he encountered the Von Brauners. “They drew good money everywhere they went,” he said. “They were good workers.”

“Kurt was very kayfabe and didn’t even like to be called Jimmy any more. He was Kurt Von Brawner ’til the end,” recalled Michael Norris, who got to know Jimmy Brawner in later years.

German heels were fairly interchangeable over the years. “Von Brawner was a nice guy. He used to be my partner many times, a long time ago,” said Hans Schmidt. Kurt Von Brawner also teamed with Karl Von Stroheim as well for a time.

Besides the other Germans, the Von Brauners themselves went through a few incarnations. When Jimmy Brawner (Kurt) split with Doug Donovan (Karl), Donovan’s legitimate brother Eric ‘Red’ Donovan was brought in as Eric Von Brauner.

Then, later there was another Kurt Von Brauner who was Willy Rutgowsky. (He died February 17, 1993 at age 69 and was also known as Kurt Von Stroheim.) This last version of the Von Brauners worked in San Francisco and their manager was Gerhardt Kaiser, who wore a German military style outfit.

Over the last number of years, Jimmy Brawner lived in Tampa with his wife JoAnn and worked in the security business. According to JoAnn and Bill Bowman, the Secretary of the Gulf Coast Wrestling Reunion, he was hesitant about going to the yearly oldtimer reunion in Mobile, Alabama.

“I know that Kurt is with the Lord and is smiling down on all of us and telling all of us the old saying you have ‘Where Grudges Are Forgotten and Friendships are Renewed’. I am so happy for him that he decided to go to the Reunions. Kurt and I want to thank all of you for making him so happy!” JoAnn Brawner wrote to Bowman and the Gulf Coast Wrestling Reunion.

Michael Norris got to know Kurt through the Gulf Coast Wrestling Reunion and recalled Kurt’s participation. “Kurt had had several people telling him about it and he was hesitant to attend it, but once he did he was thrilled. This past one was his third and he received a special recognition award and a title belt made for him by Don Fargo. He was so happy and seemed so full of life that it is hard to believe that he has passed.”

Cowboy Kelly enjoyed shared an old story. “When Kurt came to Mobile in the mid ’60s I was refereeing a match, I don’t recall who Kurt was wrestling but some how I stepped on his hand and broke one of his fingers. He didn’t laugh when it happened, but we laughed when we talked about it at one of our reunions.”

The funeral mass for Kurt Von Brawner (Jimmy Brawner) will be held Saturday, June 12 at 11:30 am in Tampa. Should you wish to send Jo Ann (Brawner) a condolence card the address is 8430 East 27th Avenue, Tampa, Florida 33619.

–with files from Steven Johnson