At times fans of wrestling find themselves wondering what happened to wrestlers from ECW, WCW and WWE. Many of these stars are still out there earning a living on the independent wrestling circuit in North America and around the world. The now-defunct Major League Wrestling provided the opportunity for Florida wrestling fans to see some of their favorites up close and personal, and the Hybrid Hell DVD gives fans at home a chance to see these same stars are just as good as you remember. 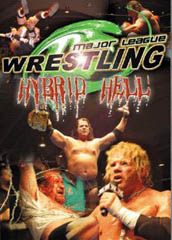 The great thing about picking up tapes and DVDs of indy shows is the chance to be impressed by new talent. Billy Fives is a skilled Florida mainstay and his match with Daniels is one of the highlights of the tape. Wrestlers who are quickly becoming big names on the indy circuit are also featured prominently. Michael Shane, with the “Queen of Extreme” Francine in his corner, puts on a heck of a match with Homicide. The feud between Raven & CM Punk, which was huge in Ring of Honor and briefly a part of TNA, crosses over to MLW. It is also interesting to see Jerry Lynn perform as a bad guy. A long-time fan favorite, Lynn aligned himself with Christopher Daniels, re-dubbing himself “The Evil F’n Show” and starts off the DVD with a good bout with former WCW Cruiserweight star Kid Romeo.

That isn’t to say that the show is perfect. The dull brawl between Los Maximos and The Samoan Island Tribe drags the show down after three strong matches. The follow up is a match between Kenzo Suzuki and Norman Smiley, a match that makes you go “Dear God, why did WWE sign this guy?” Suzuki is big, but another dull, boring lug that will surely bore WWE audiences to sleep.

I am admittedly a big fan of Simon Diamond, and his team with CW Anderson is quite good, but their match with Steve “Dr. Death” Williams and D’Lo Brown is a bit disappointing. Things pick up again with an ECW-style match between Mikey Whipwreck and Sabu, featuring the Sinister Minister in Whipwreck’s corner and a appearance by Bill Alfonso, whistle and all.

The Sabu match starts a trend, in which chairs and tables start becoming commonplace. My only complaint with this is it dilutes the effect when every match seems to have that happen. The world title match between Mike Awesome and Satoshi Kojima started off like Awesome’s classics with Masato Tanaka, but didn’t come close in the end. It is still a solid match, as is Awesome’s match immediately following, a impromptu challenge from Steve Corino.

The final match on the disc is definitely not for the weak of heart. Steve Corino goes at it with Terry Funk in a brutal and violent barbed wire ropes match. Commentator Joey Styles does a great job of transmitting the emotion from seeing both men hit the ropes and the barbed wire tearing at their skin. Barbed wire matches are never technical masterpieces, known more for just the raw horror of seeing two men batter each other against the razor sharp barbs, and this match is no exception.

The production values are good, as the War Memorial in Ft. Lauderdale, long a ECW venue, is properly lit up and looks packed. The camera work is very good, not shaky like a number of indys. My only complaint would be the lack of editing of the dead space between matches. Instead of cutting right to the next match, the down time as the wrestlers leave and ring announcer Steven D’Angelis makes announcements is kept in, which disrupts the flow of the show.

It is always fun to see something different. Independent wrestling provides some of the best wrestling available, and a definite alternative to WWE. You certainly won’t be disappointed in picking up Hybrid Hell as it has something for everyone and overall is an entertaining three-hour show.