“This time, it’s for real,” said Jim Rose, sideshow ringleader of the Jim Rose Circus vs. Jake ‘The Snake’ Roberts, tour which kicked off on July 3 in Longview, WA. 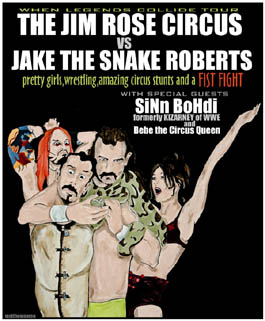 Featuring wrestling legend, Jake “The Snake” Roberts and SINn BohDi, formerly Kizarny of WWE, Rose boasted of his modern-day circus sideshow: “From out of the ring and into the clubs, this is the hottest mind-bending thrill ride your money can buy this summer.”

“This is Jake ‘The Snake’ Roberts living out his tragedy once and for all,” Rose told SLAM! Wrestling just hours before a sold-out show in Spokane, WA. “The storyline goes like this: It’s my job to recruit former WWE wrestlers and take them away from the violence of wrestling.”

Roberts himself chimed in over Rose’s phone, “I’m having a blast, man,” he said. “Getting my ass back in shape has been fun too, goin’ to the gym every damn day, working out, SINn and I are. If you’re doing something like this every night, it takes gas and you gotta do what you gotta do. When Jim Rose asked me to be part of the show I said, ‘f*** it, let’s do it, man.'”

Rose backed up Robert’s claims: “He’s completely fit,” Rose said of Roberts. “He works out every day and he’s on a mission. He’s the master of psychology and he’s kickin’ a lot of ass.”

SINn (whose real name is Nick Cvjetkovich) concurred, “Henry Rollins has nothin’ on Jake when it comes to spoken word,” he said from Portland, OR. “He had everyone in the palm of his hand, like a campfire, listening to this creepy, evil, Darth Vader, John Wayne figure. He is, indeed, the master of psychology.

“He’d have the audience laughing, then crying, taking them on an emotional roller coaster. Just awesome, really — talking about his life, heartfelt stuff, wrestling war stories, then to darker places and the macabre. You can hear a pin drop in the place, it was so f*****’ real.”

Roberts said it’s great to be performing again, “The fans have been wild, just amazing and I guess part of my fan base showed up, ’cause they’re with Jake, chanting ‘DDT, DDT,’ and bellowing, ‘Hall of Fame, Hall of Fame.’ I tell them: ‘some year, some year maybe. Ya never know.'”

Rose, who was a big fan of ’80s old-school wrestling, confirmed that audiences on the tour are really taking to Roberts. “The fans love him,” said Rose. “The Jake ‘The Snake’ Roberts fans really like us, and the Jim Rose Circus fans really like him, which sort of pulls the whole thing together and makes for a really eclectic mix. Everyone familiar with Jake knows this is a show about redemption, and about his hard fought comeback.

“Here’s a little known fact about Jake: He’s got the biggest heart I’ve ever met.”

SINn agreed: “Jake has such a big heart. He’s my friend, my teacher, my opponent — a lot of different things. After opening night, me and Jake were just looking at each other and saying, ‘Man, this is the beginning of something amazing — this (show) transcends wresting and is going into Hollywood stuff.’ I’ll give ya a quote directly out of Jake’s mouth: ‘Vince (McMahon) is gonna s*** his pants.'”

Indeed, the show’s content is compelling, blending rock and roll, theatre, and wrestling. “It dwarfs any show I’ve ever done,” said Rose. 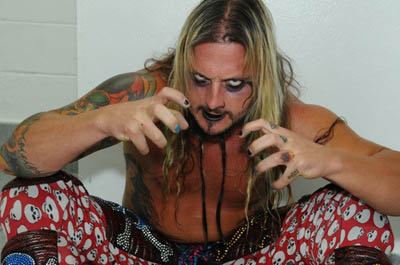 “It’s a world of extreme performance.” In the press release, Rose states: “Painfully misunderstood and abused within by his torment, torn apart by being loved or hated. (Jake ‘The Snake’ Roberts) was supposed to be the bad guy against Hulk Hogan in the ’80s, but he sold his character too well and his charisma continued to woo his fans. When he walked into the arena to cheers, Hulk would get boos. The promoter invested so much into marketing Hulk as a good guy, they had to discontinue Jake the Snake while he was selling out Madison Square Garden, time after time.

“He took it hard and had a rough patch. These tough times were exposed in the documentary Beyond the Mat. The writer for the movie The Wrestler says that this documentary is what inspired to him to write the script.”

Rose added, “On this tour with Jake, we lead our audience on a journey and explore — sometimes expose — the differences between man and monster.”

SINn said he was blown away by the impressive array of talent in the show, “Oh man, its pretty f*****’ crazy,” he said. “First, there’s these wild guys lifting concrete blocks with chains hangin’ out of their eye sockets, then a human dartboard, and then there’s these beautiful girls who get into a pillow fight — but there’s concrete blocks in the pillow cases.” SINn chuckled, ‘That was pretty good!”

But the main event of the show features a clash between SINn and Roberts. Rose tells his audience, “These are the real men who don’t need a ring. Their disputes will be settled live and raw on stage… using every trick in the book. The intimacy of this epic battle will make you feel like you’re living it.”

“I bring (the former WWE wrestlers) into a peaceful circus family,” Rose told SLAM! Wrestling in his own tongue-in-cheek charismatic style. “We have about six or seven wrestlers come out and challenge Jake, who is supposed to be peaceful now, having hung up his guns.

“SINn BohdDi fights them off, but then SINn gets upset because Jake’s not watching his back. Jake swears he did, and says he even kicked one of the wrestlers though he’s trying to stay peaceful and non-violent. Then SINn gets really upset as I step in and break it up — telling them to settle it with an arm wrestling contest. But even before they clasp hands, SINn headbutts (Jake) and says he slipped, but Jake doesn’t believe him — so I have to split them up again.”

SINn recalled, “Oh man, the fans are going crazy at this point, and I remember thinking, ‘Man, Jim Rose is like the Vince McMahon of the circus freak world.'” 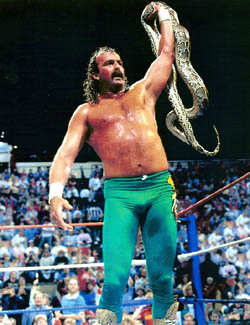 Jake the Snake in his heyday.

On stage, Rose mediated: “Let’s do it like we do it in the circus,” while standing between Jake and SINn. “We don’t inflict pain on the (circus) family and on each other. We lower our testosterone, just a little, by inflicting pain on ourselves.”

The events that follow include Roberts willingly smashing his finger with a soup can, while SINn sticks his own hand in a raccoon trap. To the delight of the crowd, Rose places a glass dinner plate between the legs of SINn — then smashes it with a sledgehammer. Rose laughed, “This is the testicular challenge.”

“Then it’s Jake’s turn and the crowd is roaring as Jake gets down, spreads his legs, and we put a concrete block between his legs and smash that,” said Rose. “SINn has to staple money to his own face, while Jake tells me that he wants the toughest thing of all. So Jake gets in a big plastic bag and we suck the air out with a vacuum cleaner. We agree that when he taps three times that I’ll let him out. So he taps, but SINn comes over and won’t let him out of the bag — so he breaks out of it himself and finally, the fight is on.”

SINn described their fight as “some kind of dream/nightmare.” “It’s very surreal, this battle we have,” said SINn. “It ends when Jake DDTs me through a steel table. Then he throws his snake on me and that crazy, wild hodge-podge crowd of wrestling fans and freakshow fans are going absolutely nuts!

“Long gone are (Jake’s infamous snakes) Damien and Lucifer, who are departed, so he had this cobra that he wanted to use, but the safety commission wouldn’t let him use it. So Jim Rose, being the eccentric guy that he is, went to Belgium and bought this f*****’ gigantic — like anaconda size — albino, Burmese python that is f*****’ huge! (Rose) spent $63,000 on this snake and it has its own traveling ecosystem/trailer. The f*****’ snake gets better trans than we do!

“You know, what’s funny is when the snake was purchased by Jim, its name was Maurice, but I’ve affectionately renamed him Fluffy. So on this tour, Jake has been dumping this 25-foot, 265-pound snake on me named Fluffy.” 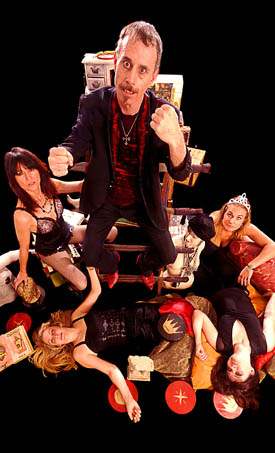 “I call him Son-of-a-Bitch,” said Roberts. “(The snake) has already bit two people on this tour. But he hasn’t bit me, so I’m happy.” The show concludes with Roberts taking a fish hook attached to a chain, putting the hook through SINn’s tongue, and dragging him — still wrapped in the snake — off the stage to the delight of the fans.

“After that opening night, Jake felt like we’ve really touched on something special here,” said SINn. “We’re both kind of known for being weird guys who think out of the box, so of course we wound up together on something so bizarre as the Jim Rose Circus. Man, its pretty insane.

“This two-month summer tour is a petri-dish for what’s to come. It’s such a family, this show we’re doing and we’ve got such a bizarre six degrees of Kevin Bacon — we all seem to somehow know each other. You have Jim Rose who is friends with Alice Cooper, who is good friends with Jake, who is good friends with me. Jim is playing golf with Mick Jagger and Marilyn Manson, while Jake is doing deep sea fishing with champions of the world, and here’s me travelling all over wrestling everybody from King Kong Bundy to Koko B. Ware. If you put us all together and compiled a list of who everyone was on our cell phones, you’d have this f*****’ crazy list of people.”

SINn laughs, “Jim is on the phone giggling, telling someone how excited he is to have Jake on tour with us — and (Rose) is a guy who has worked with everyone from David Bowie to Trent Reznor. Then you have me on the phone chattin’ with The Boogeyman tellin’ him, ‘Ah man, you gotta come do some of this stuff with me.’ Then there’s Jake on the phone goin’ on and on about the show with Terry Funk and Dusty Rhodes. Man, there’s such a buzz around this tour, all the guys in TNA I talked to last week knew all about the show — and I can’t wait to see where this goes.

“I would love to see that I had a part in bringing Jake to movies and to Hollywood, as his opponent fighting him all along the way,” SINn beamed with enthusiasm.

Rose boasted, “A ticket is good for a seat, but you will only use the edge. High-flying, bone-jarring excitement — not since the Christians were fed to the lions has there been a show this funny. It feels like biblical times with miracles happening everywhere.”

Roberts concurred, “It is a miracle, and I’m just really happy to still be here telling road stories, stories about my life, and being out in front of people performing. You know, you just never get enough of that, and when you’ve been doing something like this for 35 years, you just want to keep doin’ it.

“I’m out here doin’ it man, and still proving to the world that I can still do what I wanna do.”