Francine brings ECW stars together for a good cause

Hippocrates, the famed Greek physician known as the father of medicine, said that “Extreme remedies are very appropriate for extreme disease”. On June 27, those words come to life, as over 30 hardcore legends will be reuniting, bringing their unique brand of hardcore action back to Philadelphia in an effort to help conquer cancer.

The Legends of the Arena show, taking place at the Arena (formerly known as the ECW Arena), is a fundraiser to raise money for the American Cancer Society. The event is being planned by original ECW star Francine “The Queen of Extreme” Fournier, for whom the cause is particularly personal. In 2008, Fournier lost both her father and her sister within days of each other, victims to the disease. While this may have devastated most people, Fournier was able to channel her grief, and organize what may well be the most important, and entertaining, wrestling shows of the year. 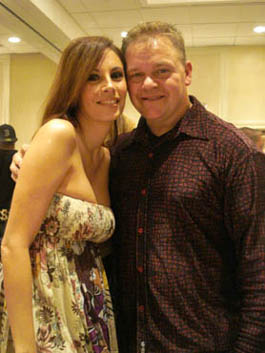 Francine and Shane Douglas at the Legends of the Ring fan fest in October 2008. Photo by Bob Kapur

“Everyone is really excited about it,” Francine told SLAM! Wrestling recently. “(The wrestlers) thought it was a great cause. Some of them called me about it (seeing it also) as a great opportunity to see the boys again.”

The result is a stellar line-up of over 30 stars who wrestled at the Arena regularly during the heyday of 1993 to 2001. Scheduled matches include: Al Snow vs Shane Douglas (who will be inducted into the Arena’s Hardcore Hall of Fame), the bWo vs the FBI, Rhino vs Spike Dudley, Balls Mahoney and Axl Rotten vs the Baldies, CW Anderson vs 2 Cold Scorpio, and Raven vs Justin Credible. The main event pits the Sandman against Sabu and will be refereed by Terry Funk. Other participants include Tracy Smothers, Devon “Crowbar” Storm, Scotty Riggs, Tod Gordon, and Tammy Sytch. In addition, there will also be a fan fest with a Q&A; session and a tailgate BBQ before the show.

“We have a great line-up that I am very happy with,” said Francine. “It will be former ECW superstars having a good time and giving it their all. Who knows if we will all be together again?”

Funk echoed those sentiments in a recent interview with the Monday Night Mayhem Radio Show. “It will be my last time in The ECW Arena more than likely,” he said.

In that same interview, Funk said that he was happy to be a part of the event, and made special mention of Francine’s efforts in organizing the event as an important factor in that decision.

“I can’t think of anybody else with the desire and passion other than Francine to do something like this,” he said. “She is driven but not just her love of the business, but her love for her family.”

For her part, Francine’s inner strength and her love for her father and sister are what drives her in making the night a success. While this will never be able to replace her loss, she does find it “a comfort, knowing that the money raised will help find a cure for this horrible disease.” She also credits her faith in God for carrying her through the difficult times. “As much as I miss my Dad and sister, I truly believe in Heaven and that they are together and not suffering anymore,” she shared. “Faith is a wonderful thing.”

In addition to her spirituality, Francine has her new family to lean on. She was married a year ago (their first anniversary was on June 7th), and she has a baby on the way — so will likely look considerably different than she did when most fans saw her last on TV — and she couldn’t be happier.

“Ever since I was a little girl,” she beamed, “I dreamed of getting married and becoming a mother. I’m finally reaching that goal. I have a wonderful husband who I love with all my heart, and a baby on the way. This is how I always wanted my life to be. I look forward to my future and cannot wait to see what’s in store for myself and my family,”

“Bloodthirsty” Bob Kapur has a challenge of his own that he’s willing to take for SLAM! Wrestling readers. In Philly, he will run up and down the famous Rocky steps repeatedly, and for every round trip he does, you donate $1 to the Cancer Society. If you’re up for it, e-mail him at [email protected].