The second anniversary of the weekend that will live in infamy — June 22-24, 2007, when Chris Benoit strangled his wife Nancy with a cable TV cord, snapped their son Daniel’s neck with a variation of the Crippler Crossface, and hung himself from a basement weight-training machine — approaches.

Under Georgia law, the families must file wrongful-death civil lawsuits within two years of the crime. There is no indication that either the Benoits or the Toffolonis will do so. And if that proves out, the window will slam shut on perhaps the last best chance for information that could drive reforms in the regulation of pro wrestling health and safety standards. 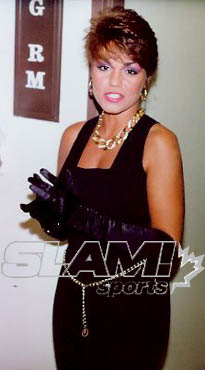 “Woman” backstage in her days in WCW. Photo by Mike Lano, [email protected]

Most pointedly, the World Wrestling Entertainment wellness program, complete with “therapeutic use exemptions” (TUE’s) for astronomical testosterone levels — which the company’s own TUE administrator at the time, Dr. Tracy Ray, acknowledged to Congressional investigators had “shadiness in almost every case” — will proceed in a business-as-usual mode.

After an initial flurry of sensationalism, the media have already whiffed on the implications of the Benoit story; the mainstream media didn’t care and the wrestling media cared more about breaking down the next pay-per-view storylines. A couple of committees of the House of Representatives strutted their stuff for a while before deciding that they could get more mileage out of investigating fake records in the legit sport of baseball than out of probing the stunning volume of real deaths in “sports entertainment.”

So, for public education and possible future action, only the potential of new revelations in open court remained. With Benoit’s personal physician, Dr. Phil Astin, recently having been sentenced to 10 years in federal prison for overprescribing prescription drugs to his patients (though the access to steroids that he also provided was not among the charges), a private lawsuit might have facilitated, for example, release of the wrestler’s medical records. That, in turn, could have shed additional light on the history of both Benoit’s drug use and his concussions — to cite the two major areas of interest to students of his inexplicable descent into homicidal-suicidal insanity.

If, as I’m guessing, neither Cary Ichter nor Richard Decker (respectively, the Benoits’ and the Toffolonis’ attorneys) pulls the trigger, the core reason will be that there is simply not a compelling civil case to be made. Or, certainly, not one that stacks up as a good business proposition, on a contingency retainer, against the formidable legal firepower of WWE.

In December 2007 a story leaked that WWE had rejected a preemptive $2 million settlement offer from Ichter. Mike Benoit, Chris’s father, denied ever approving such an offer, and told me that he subsequently instructed Ichter to focus on resolving the estate dispute between the two sides of the family. Benoit did continue to have Ichter’s office investigate some of the gaps in the Fayette County sheriff’s report closing its homicide file; many of those discrepancies were first exposed on my blog Wrestling Babylon News.

When I was in Georgia last summer, I met with Ichter over breakfast (and, by the way, we went “Dutch”). Ichter expended most of his energy pitching coverage of his lawsuit against TNA on behalf of Konnan. (I wasn’t interested, and that suit soon settled.)

The Benoit civil lawsuit card was always a long shot. In an email to me a year ago, WWE lawyer Jerry McDevitt wrote, in part, “Chris Benoit, and only Chris Benoit, is factually, legally, and morally responsible for the murders of his wife and child and his decision to commit suicide rather than face the legal consequences for committing two first degree murders.” It’s almost impossible to argue with the first two-thirds of that statement.

McDevitt added a point that could have had a chilling effect on any party tempted to file wrongful-death litigation as a kind of fishing expedition.

Dr. Astin, McDevitt noted, was charged with not only prescribing an illegitimate amount of drugs to both Chris and Nancy Benoit, but also “with conspiracy with some of the recipients of his prescriptions to further distribute the drugs. As Michael Benoit surely knows, since he is the executor of the estate, the house where the murders were committed had no mortgage. Instead, the builder was paid by a series of payments totaling hundreds of thousands of dollars, and all payments were consistently made by Nancy Benoit from various accounts.”

The clear message — which should have been obvious anyway — was that if WWE were hauled into court, it would defend itself aggressively, and such a defense inevitably would further drag Chris and Nancy’s names through the mud. The same message, in more subtle form, may have been behind the brief campaign by WWE to promote Chris and Nancy’s concern over little Daniel’s medical condition as Chris’s main stressor before he snapped.

Woulda, coulda, shoulda. The deepest mysteries inevitably leave open questions, and the Chris Benoit double murder/suicide is no exception. As a writer, I have pushed, and will continue to push, for as much disclosure as possible. Only the most strident fringe of the deny-all crowd could fail to realize that the drug intake and mental hygiene of pro wrestling talent is a legitimate public health issue. The lives of hundreds of wrestlers and their loved ones hang in the balance.