In case you didn’t know it, his real name is Randall Mario Poffo and he began his wrestling career as a Spider-Man like character. What you also might not know is that along with his brother Lanny and famous father Angelo, he started the International Championship Wrestling promotion feuding with Jerry “The King” Lawler and others in the southern United States. There are many interesting facts about the life and times of wrestling icon Randy “Macho Man” Savage. You will discover none of them in the new three-disc WWE DVD set. 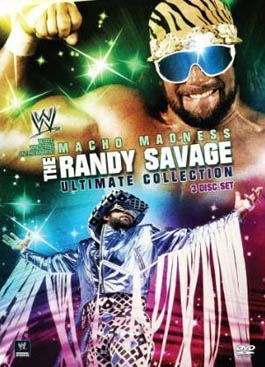 Macho Madness: The Randy Savage Ultimate Collection could be considered the ultimate collection of Randy Savage matches, I guess, but alas it is not in any way an in-depth look at what Savage or his family has meant to the wrestling business. Unlike other WWE DVD collections, this set makes no attempt to delve into his life outside the squared circle or the impact he made on professional wrestling.

Ineffectually hosted by Matt Striker and Maria, the two WWE superstars express their admiration for the six-time World Champion and not much else. Striker is amusing at times and seemed sincere in his appreciation for Savage’s accomplishments. Maria should have just stood there and smiled. Maria in charge of research? Yeah, right, and the Great Kabuki’s mist was really blinding and The Million Dollar Man used to have a winter home in the Swiss Alps or whatever The Fink used to say. They do provide some background on Randy’s dad, although it amounts to is a quick historical rundown (including his sit-up record) and there is no mention of the renegade promotion which ran in opposition to the established organizations at all.

There are no bouts from Savage’s days in ICW or the Continental Wrestling Association, or from the Canadian Maritimes, where the family helped promote one summer. There is nothing before his debut match in the WWE on Prime Time Wrestling in 1985. In it, he faced “Quick Draw” Rick McGraw, who was decked out in a Toronto, Canada, T-shirt. Let it never be said that old McGraw didn’t have good taste when it came to world class cities. Strangely enough, the match did jog my memory of how all of the heel managers in the WWE then began vying for Savage’s services and how in a short period of time he would become my favourite wrestler of all time.

From there, the set evolves into a greatest hits package highlighting all of the major turns in Savage’s nine-year stay with the WWE and a brief look at his time in World Championship Wrestling. We relive his feuds with Tito Santana, Bruno Sammartino, Ricky Steamboat, Honkytonk Man, Ted DiBiase, Ric Flair, The Ultimate Warrior, Jake “The Snake” Roberts and Diamond Dallas Page. His classic match against Steamboat at WrestleMania III. His early, furtive feud with Hogan, three years before the MegaPowers joined forces. Savage’s evolution into the “Macho King.” His bitter battles with Ric Flair. His off-again, on-again love affair with Miss Elizabeth, including their wedding at SummerSlam in 1991 and the deliciously dastardly attack by Jake The Snake. That snake bite on poor Savage’s arm still looks vicious to this day. Ouch!

The only failing in the narrative is that a number of the key events which sparked the feuds to begin with like the backstage attack on Hogan that led to their match at WrestleMania 5 or the infamous ring bell assault on Steamboat are not shown in their entirety. One day, the WWE may realize that those events are just as much keepers to fans as the matches or feuds themselves. And where is the Savage versus DiBiase steel cage match from WrestleFest? How could anyone miss that one?

The two real gems on the DVD though are Savage’s match against Shawn Michaels at WWE Rampage 1992 and a legendary tag team match pitting Savage and Bret Hart against Ric Flair and Shawn Michaels. Looking back at the Savage and Michaels encounters, one wonders what might have happened if the WWE would have pursued a full-on feud or program between the two as the chemistry was there. Michaels was the young, high-flying upstart and had Sensational Sherri at his side, while Savage was the veteran and still had Elizabeth in his corner. It sure as hell would have been better than Savage and Sherri versus Dusty Rhodes and Sapphire. That still leaves a bad taste in my mouth. Yecch!

When it comes to the extras, you had better like interviews and plenty of them. There is the aforementioned wedding, the coronation of the Macho King and Elizabeth’s debut but the rest of the content are all interviews taken from Prime Time Wrestling, Superstars and Monday Night Nitro. They are good for a laugh or two and remind us that Macho sure had the gift of gab even if being “funky like a monkey” doesn’t sound that flattering if you really, really think about it.

Me being a Macho Man mark aside for a moment, slapping in the discs and looking back at his WWE tenure, you don’t really understand how much Savage accomplished until it is laid out before you on three DVDs. Sorry, Flair, Taker and RVD but there is only one Macho Man. It is just too bad that while going through the set we really don’t learn anything about the man behind the brilliant robes, gruff voice and colourful sunglasses.

John Powell is definitely a Macho Maniac. Always has been, always will be.