The Head Cheerleader. The Queen of Extreme. The future Mrs. Bob Kapur. All of those terms have been used at some point or another (well, except the last one by anyone else but me) to describe wrestling’s only true hardcore diva, Francine.

SLAM! Wrestling recently had the opportunity to talk with the former ECW superstar about her career both in and outside of professional wrestling, including her participation in the Hardcore Homecoming reunion show taking place on June 10th in Viking Hall (aka: ECW Arena) in Philadelphia.

Indeed, for Francine, the show will be a journey back to the building that made her famous -? a journey which began from the most unlikely of places.

“I was working at a life insurance company,” she says of her pre-ECW days. “And I knew that I didn’t want to be stuck behind a desk for the rest of my life. I saw ECW on TV one night in 1993, and a commercial came on for their training school. I called up and started training with the guys. I was the only girl there. And the rest, as they say, is history.” 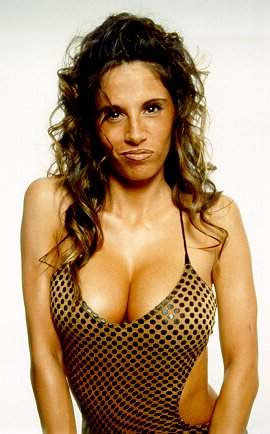 The Queen of Extreme Francine

After a year or so of training from JT Smith (the original Full Blooded Italian), Francine made her ECW debut, first playing the role of a fan of Stevie Richards, and subsequently his manager. Over the next seven years, she would go on to manage a number of ECW’s top stars, leading the Pitbulls, Shane Douglas, Bam Bam Bigelow, Tommy Dreamer, Raven, and Justin Credible to championship gold. But, the company being what it was, her role wasn’t limited to that of mere eye candy. On the contrary, Francine definitely earned her hardcore stripes, frequently taking bumps that would put many male wrestlers on the injured list.

“(If there was anything I didn’t like about ECW, it was) the bumping. It’s always scary falling and getting hurt. But,” she says matter-of-factly, “that was part of the job. I never refused to take any bumps. I was always scared, but I wanted to take them because as a woman (in a male-dominated industry), I wanted to do as much as I possibly could.”

Besides, she says, even the pain of a fractured pelvis can’t overshadow the joy of doing something she loved.

“It was more like fun than it was a job,” she remembers fondly. “I was paid for something I loved to do -? and that is rare. I have a lot of great memories, and most are about times where I had so much fun on the road. The locker-room was my second family, and I miss everyone so much.”

The chance to see many of those friends again at Hardcore Homecoming made agreeing to do the show a no-brainer.

“I am really looking forward to it. It will be great to get together with everyone and work the ECW arena one more time. I can’t wait!”

Nor can her many fans, who, since ECW folded, have been hoping to once again see her in a national promotion (in other words, sign her, Vince!). It’s too bad, then, that she hasn’t been named as one of the former ECW stars who will be appearing at the WWE’s One Night Stand pay-per-view on June 12th.

Still, Francine has nothing bad to say about the WWE event, noting that the appearance of the many other ECW stars should result in a good show.

“ECW had a cult following and people really miss it. Both shows will be very successful. We will have to wait to find out which show turns out better!”

Besides, fans can always get their Francine fix by checking out her newest venture, www.missyhyattandfrancinetv.com, an online reality fansite that she stars in with another famous wresting lady, Missy Hyatt.

“We take the video camera everywhere and show the unedited video on the site,” Francine explains. Other features include exclusive pictures, live chats (Francine usually does them for three hours on Monday nights) and webcam chats. There is also some content for more mature fans, including more adult picture and video requests. “We have been open for a few months now, and everything is going great for us.”

She is quick, however, to point out that she leaves the more adult content to others, and has no plans to cross the line of decency herself, a policy that she has maintained throughout her career.

“My fans know that I will never pose nude and I think they respect me for it. You can definitely be sexy without baring it all. Nothing against girls who do, it’s just not for me.”

Though she has branched out into this other form of entertainment, Francine can frequently be found making appearances at various indy shows. At any time, her schedule at www.foreverfrancine.com lists a number of upcoming appearances. She hopes that one day soon, those dates will include a visit to the great white north, as Francine has close ties to Canada, being that her father is French Canadian (her last name is Fournier).

In the meantime, she is satisfied with her life, her career, and her ECW legacy as the royal highness of hardcore. And hopes that fans will always look back on that legacy with the same fondness as she does.

“Maybe I’ll be remembered as the crazy chick who took all the nutty bumps! As long as I’m remembered in a positive way, then it was all worth it. ”