ORLANDO, FL — So close, yet so far away. For some time, this saying was the hallmark in describing the career of wrestling sensation and current Total Nonstop Action (TNA) X Division champion Christopher Daniels.

Hard to believe when you see where this human highlight reel is today. 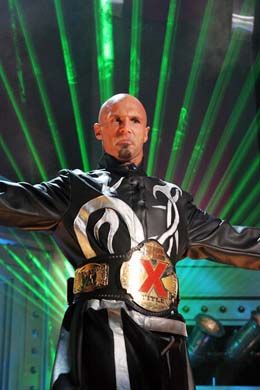 “It’s not lost on me the chances that I’ve had that fell apart due to bad luck or whatever you call it,” he reminisced with SLAM! Wrestling prior to April’s Lockdown pay per view at Universal Studios Florida. “I’ve always said that I was going to stay loyal to a company that gave me the opportunity and that’s what TNA has done and that’s why I’m here.”

For most of his career, he has been within reach of that ever elusive spotlight of professional wrestling fame, only to see it fall away into unfair oblivion.

His first chance came with a development deal with what was then known at the WWF, now WWE, in 1998. Despite showing signs of becoming the stellar performer that he is today, the company never invested in him and eventually the two would part ways. He would return for a brief tenure as one of the masked Los Conquistadores tag team.

Despite never making a dent as a full-time roster member, Daniels has not washed his hands of the world’s largest professional wrestling organization.

“I’ve never said I would not work there,” stated Daniels. “WWE, for one reason or another, maybe just didn’t think they could draw money with me. That’s understandable and I don’t hold any ill will towards WWE; they hire who they want to hire. They didn’t see the things in me that I always knew was there.”

Daniels would find his way to Atlanta-based World Championship Wrestling (WCW) where many mainstream fans got there first dosage of Daniels during his match against fellow indy standout, Michael Modest. It was also where Daniels almost saw his career come to a screeching halt when he landed on his head as a result of a botched Asai moonsault. Despite this, his talent was more than evident and in early 2001, Daniels would secure a contract with the promotion.

Yet not long after his signing on the dotted line, the promotion folded in March of that same year and once again, Daniels was denied. Not long after, the wrestling industry would find itself mired into a full-fledged recession, with few opportunities to make big money.

But where others walked away, Daniels continued on, slowly building himself into a must-see, par excellence wrestler.

He did so via the independent wrestling circuit in America, receiving a constant flow of rave reviews from wrestling connoisseurs.

“A lot of promoters on the independent scene gave me an opportunity to shine,” said Daniels. “I never disappointed any of them, I don’t think. Whether it was Jim Kettner at ECWA or Roland Alexander at APW; Ring of Honor definitely comes to mind with the opportunities they gave me there.”

“It was just a matter of going out there and giving 110%, no matter what federation it was or what company I worked for. I feel like that’s been one of the things that has been constant in my career, the fact that I’m going out there and putting it all on the line.”

That unique brand of work ethic went a long way in earning Daniels a loyal fan following, often sharing their praise of his in-ring performances via the internet.

“I think fans appreciate that (work ethic), especially the hardcore fans who go to independent wrestling shows, shows where you don’t necessarily see the guys on TV. The ones that really care about wrestling, they understand why a guy goes out there and just gives his all. I think that’s one of the things that endeared me to the Internet community.”

His schedule would only intensify as he maintained a regular touring schedule with various Japanese promotions, including Michinoku Pro and New Japan Pro Wrestling (NJPW). It was in the latter promotion that Daniels would have the honor of participating in the famed Super J tournament and co-holding the IWGP junior heavyweight tag team titles with American Dragon Bryan Danielson.

While competing in the Land of the Rising Sun, he assumed the masked identity of Curry Man, dancing his way to the ring to the delight of fans. It was yet another opportunity for Daniels to show off his dynamic athleticism and personality.

“It was always a comfortable place to go, it was a good place to hone my talent and really bring it up a notch. Over in Japan, especially in New Japan, the talent level was just incredible and to be able to get in there and hang with those guys, you really have to be on your mark. I always looked at Japan as a place to try new things, work on my ring shape and try to make myself better so that when I did come back to the States, you could tell that I’d put some effort into what I was doing.”

His tours of Japan went a long way in supplementing his wrestling income, made crucial by the fact that he was not signed to any kind of long-term contract.

“A third of my matches were in Japan for a couple years,” said Daniels, who made his first wrestling appearance in the country as early as 1998.

“Easily half of my money in a year came from Japan. It was very profitable for me and being able to go to Japan really did give me some breathing room (financially).The only drawback to going to Japan, in terms of the United States scene, out of sight was out of mind. There were a lot of times where I would have a little momentum, whether it was with WWF or WCW, then I would go to Japan for a month and not be able to talk to anybody. It kinda hurt me in the States for a long time, that’s one of the reasons why I haven’t gone to Japan in six or seven months just because I have some momentum here in TNA. They’ve really given me the first big push of my life and I don’t want to mess that up. TNA has really taken good care of me and I want to reciprocate that.”

But what also remains a constant for him when it comes to his wrestling commitments is his family. Married and the proud father of a daughter born not even a year ago, Daniels must now strike the balance of pursuing a prosperous wrestling career and family life.

“I did go over a couple of times after the birth of my daughter,” Daniels said in reference to his last few tours with NJPW. “The good thing about New Japan was that their tours are not that long; you usually average about two and half to three weeks. It was tough on me to leave my daughter, but at the same time, the money was there and I do need to provide for my family. I have plans on returning there at some point, but right now I don’t need it, so I can really focus on TNA and spend time with my wife and daughter.”

In December of 2002, Daniels joined the Nashville-based TNA promotion. He ended up in the elite tag faction formed by Vince Russo called Sports Entertainment Xtreme (SEX), along side Low Ki and Elix Skipper. It was a unique opportunity for Daniels to indulge in tag team action, never missing a beat when it came to his in-ring performances.

“That was the first time any of us had tagged with any one of the other,” recalled Daniels. “We got close really fast and I thought we really had a good thing going. I feel the three of us didn’t really get a chance to do as much as we could have with the whole Freebird-style thing that they had tried to put together. I really liked the dynamics of Triple X and the fact you never knew which two you were going to face once you were in the ring.” 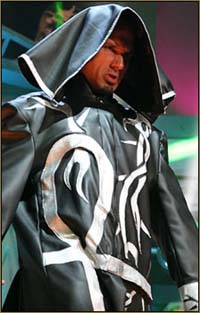 The faction would not endure, as Ki would eventually leave the promotion in favor of his overseas commitments in Japan. But that did little to hamper the momentum of Daniels and Skipper, with both men rising to the occasion and delivering some of the better tag team matches seen in some time on the shores of North America.

They competed against a variety of tag teams in TNA, but it was their feud with America’s Most Wanted that would ignite the tag team division within the company. In time, the war between the two rivals would boil over at the Turning Point pay per view, in the now famous Six Sides of Steel cage bout.

“That was probably the worst couple of hours to sit through, from the time the show started, to the time we walked into the ring; just anticipating walking down the aisle and getting into the cage,” Daniels told.

“There was a lot of pressure on us, especially because we were the main event. There were a lot of eyes on us and whether four guys, who really weren’t considered main eventers at that time, would be able to go out and put on a show worthy of being the main event.”

In fact, they more than proved they were worthy of that prized position on the show. The battle was hailed as a match-of-the-year contender with all four athletes delivering an awe-inspiring action saga, topped off with Skipper’s death-defying walk across the steel cage. Triple X would go on to lose the contest and, as per the match stipulation, were forced to break up.

But for Daniels, the match was a certified victory for his dedication to his craft. He would return to singles competition, eventually claiming the prized X Division championship belt at TNA’s Destination X pay per view in a four-way Ultimate X match. Finally, the long sojourn for recognition was over and he could now look out from the top of the mountain of success he worked so hard to ascend, never once deciding to climb down and walk away from.

“It never really occurred to me that being dropped from WCW and WWF was the end of the sentence for me. It was just a matter of well, I’m going to keep trying. I was still healthy; I still loved doing what I was doing. It didn’t occur to me to give up, it occurred to me to keep trying. I just felt that at some point, I was going to be noticed by somebody and given a shot by somebody and that turned out to be TNA.”

Christopher Daniels will put his title on the line at TNA’s Slamminversary, Sunday, June 19th.