WWE’s Divas have hit the beach for their newest magazine, and the Fed’s home video came along for the ride, coming home with Viva Las Divas.

The “making of” video isn’t your usual WWE fare. Filmed in Mexico, the vid includes a look at each of the Divas that were on the shoot for the mag. 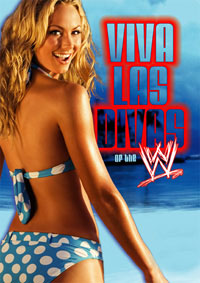 Since we at SLAM! like to take a DVD and break it down match by match with ratings for each contest, I’ll attempt to do the same here for each of the Diva’s segments. So, without further adieu, let’s dive in to Viva Las Divas.

The DVD gets off to a bad start as Jonathan Coachman introduces himself as our host. The vast majority of the Coach segments are cheesy filler, and really add nothing of value, save for those involving Trish Stratus who injects some decent comedy. Still, it’s not enough to make these clips worthwhile.

Stacy Kiebler
Kiebler tries to show how hard a photo shoot can be, but a lot of it comes off as being fake and forced, much like many of the “Diva” matches in WWE today. The segment is too long even for the most die-hard Stacy fan.
Rating — .5 out of 10

Lilian Garcia
Surprisingly, Garcia is on her first Diva photo shoot here. Methinks she’ll be on more, because she shows a lot of personality, giving some funny banter. Garcia also gives viewers some background (such as that she’s an army brat) on her life, and really shines.
Rating — 4 out of 10

Joy Giovanni
The first of the nameless, faceless Divas, Giovanni gets a short segment but makes the most of it, talking about how she tried to keep an upbeat tempo on the long shoots.
Rating — 2 out of 10

Candice Michelle
Michelle sounds pretty cocky here as she talks about how she has done shoots before. Boring.
Rating — .5 out of 10

Victoria
Victoria spends much of her segment talking about a photo with an iguana, which is somehow intriguing and boring at the same time. Not bad, not good.
Rating — 1 out of 10

Amy Weber
How she was included on the DVD, long after she quit, is beyond me. Maybe she can get some royalties from this. Anyways, Weber does a decent job and shows a bit of a funny side. Of course, a lot is unintentional as she talks about enjoying being part of the WWE family.
Rating — 1.5 out of 10

Michelle McCool
McCool could end up being the best of the NFDs, but right now she doesn’t pull off her work well.
Rating — .5 out of 10

Dawn Marie
Underutilized and underappreciated in the Fed, Dawn offers some intriguing veteran insight. A decent-sized segment.
Rating — 1.5 out of 10

Ivory
Ivory is probably the most experienced of the Divas for the shoots. Like Dawn, she offers some good perspective, and tells a good story behind one of the photos.
Rating — 2 out of 10

Maria
Maria shows a lot more personality here than she ever has on Raw. Like McCool, she has potential.
Rating — 1.5 out of 10

Jackie Gayda
Well, this can’t be worse than her wrestling, can it? Gayda takes her time to talk about her WWE career, not just the photo shoot, so there’s a bit of originality here.
Rating — 2.5 out of 10

Melina
This was shot before Melina debuted on WWE TV as part of M-N-M. Before her OVW stint, Melina was actually one of the NFDs, so there is hope for there others. There isn’t much here, however.
Rating — 1 out of 10

Lita
Lita shows a bit of humour here that is projected through the laughs she gets on the sets. You really get a feeling that she really enjoys the shoots.
Rating — 2.5 out of 10

Torrie Wilson
Wilson talks about the competition aspect of the shoot a bit before going into some duller stuff. Average at best here.
Rating — 1 out of 10

Christy Hemme
Hemme’s segments gets a big bio treatment like something out of Confidential, including talking about her mother who passed away. Hemme shows a lot of personality and is worth a watch.
Rating — 4.5 out of 10

Trish Stratus
Stratus shows some sweet humour here, including a rib on the photographer. Trish shows why she’s the top Diva on the roster.
Rating — 5.5 out of 10

The DVD comes loaded with extra Diva moments, including some in-ring stuff. The top match is Lita vs. Stratus for the Women’s Title, which drew an easy 6-count. Much of the other in-ring stuff are the usual pootie-tang sideshows. There’s also the Lita/Kane wedding, the Monday Night Football spoof, some photo shoots, island segments that didn’t make the main doc and others.

The bottom line with the DVD is that if you are a fan of in-ring wrestling, this is definitely not the recording for you. If you are a fan of the Divas and want to see a different side of the ladies of the Fed, then by all means, grab this recording.