Trigg: ‘Wrestling tougher than it looks’

One has to wake up pretty early in the morning to get the best of mixed martial artist/analyst Frank Trigg. In Mississauga, Ont., recently for an MMA Expo, the Rochester, NY, native talked to SLAM! Wrestling about his stint with TNA and shared his thoughts on life after the octagon.

Trigg has competed against some of the best fighters in the world, the likes of Matt Hughes and Georges St-Pierre. He also knows wrestling, having trained under the tutelage of famed wrestling coach Jack Spates at the University of Oklahoma. 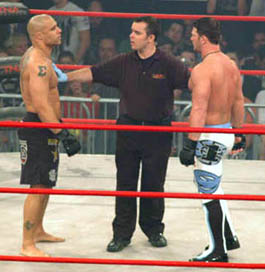 Frank Trigg and A.J. Styles prepare to face off at No Surrender in September 2008. Photo by Mike Mastrandrea

Then last September, in Oshawa, Ont., Trigg competed on TNA’s No Surrender pay-per-view, where he took on A.J. Styles in an MMA-style match. So it isn’t surprising to hear Trigg mull over a professional wrestling afterlife when his MMA career is over.

Trigg noted that he and TNA discussed his returning to wrestling more or less on a sporadic basis. “We talked a little bit about it,” he elaborated. “We were trying to get back into it, but I signed my [four-fight] deal with UFC so that kind of pulls me out of pro wrestling at least for a while. But I was trying to get back in with TNA, and hopefully in the future once I’m retired from MMA and I’m full-time out of the sport, and ready to move on to something else, I can move into full-time pro wrestling.”

With Trigg’s amateur wrestling and judo credentials so extensive, it is interesting to hear his experience on learning the artform of professional wrestling.

“Tough, tough, man,” he emphasized. “I can cut a promo like nobody’s business. It’s easy to cut a promo than to actually do the sport. It’s tough. Pro wrestling is a tough, tough thing. It’s a lot of dedication. It’s a lot of me being able to work with a partner. In my expo, I don’t work with anybody. You’re punching me, I’m punching you; you’re kicking me, I’m kicking you.

“It was way more difficult than I thought it was going to be.”

This Saturday, June 13th, UFC 99 goes down on pay-per-view, and Trigg offered his prediction for the main event, which features Rich Franklin matching up with Wanderlei “The Axe Murderer” Silva. “I like both athletes. Wanderlei Silva is my favorite fighter of all-time, but I really like Rich Franklin,” he said thoughtfully. “I like his attitude towards the fights. I like his dedication to learn how to be a better fighter every time. He’s not one of those guys that talks about getting better. He goes out there and truly tries to become a better athlete every single time that he fights. I say Wanderlei Silva is still a little too much for Rich Franklin to handle. I do think it’s going to get to the second round, but that Wanderlei is going to win, coming down the middle.”