I went into Royal Kill pretty much cold, knowing only that former TNA Knockout/current WWE Diva Gail Kim was a featured character. I was not expecting too much, after hearing the premise — it appeared like a mesh of Dungeons & Dragons and Hong Kong cinema. I am hardly what you would call its target demographic, though with an extensive film background and a pretty open mind, I was surely willing to give it a shot.

The premise is rather big and convoluted. I’ll break it down as simply as possible.

Frail and moon-eyed Pat Morita (in his final role) plays the Great General, who is the instigator of evil that allows the nefarious Skanji Empire to take over the Himalayas. He funnels his rancor and energy into Nadia (Gail Kim), a ferocious killing machine who systematically kills off the king of the region and all of his living heirs… save for one: a girl who had been hidden away for 17 years. It is Nadia’s mission to find this missing princess and wipe out the last of the line.

Before the great king dies, he tells his most trusted soldier, Adam (Alexander Wraith), how to find the princess, and makes him swear to protect her at any cost. The strapping and acrobatic Adam, who seems to possess superhuman hearing and speed at various times in the picture, fits the bill as a worthy protector and suitable challenger to the wily and unpredictable Nadia. 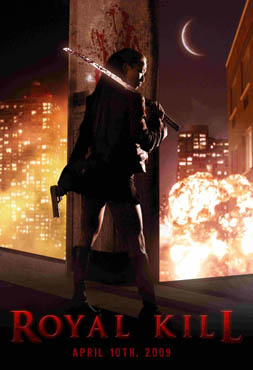 The princess has been hiding in Bethesda, Maryland, almost her entire life (if you can imagine such a thing!), protected by a man named Doug, played by Eric Roberts. The placid and rather ineffective American “guardian” stands up to Nadia’s offense as well as single-ply toilet paper, and soon the princess is in terrific peril. Thank goodness Adam is there to deflect any further bloodshed. Adam swoops in and assumes the job Eric Roberts was fully incapable of handling, and our heroes are on the run from a killing force that knows no bounds.

There are some big fight scenes and special effects leading up to the finale, with a twist at the end that is not exactly foreshadowed nor natural, but films of this type tend to do things like that to be contrary or ironic, and I was not exactly shocked by it.

The film surely had some holes. Some could be forgiven, some not.

To put the most cherished child in your dynasty in the hands of this man is like hiring Shemp Howard as your night watchman. A lot was done throughout the film to create an emotional bond between surrogate father and daughter through the use of flashbacks, but it was hard to buy any of the sentiments because the man just didn’t seem to do a whole heck of a lot to actually protect his adopted daughter, when push came to shove.

The princess is, for most of the film, entirely oblivious of her worth. Under the assumed name of Jen, she dreams of Orlando Bloom and has self-esteem issues, just like any re-blooded American teenager, and could never imagine a world where anything could be more complicated than the instructions on a Kool-Aid packet. Played by the plucky Lalaine (nee Lalaine Vergara-Paras from TV’s Lizzie McGuire), Jen has a spark and likability that actually works quite well and helps the emotional sequences play out as successfully as possible.

I thought a lot of the film was fun, and the the majority of it was rather palatable, viewed exclusively with the eyes of a sliding scale. It had a lot of ambitions it was able to achieve within its own framework, and I will give the filmmakers credit for that. It’s amazing to see what folks can achieve (or what old-fashioned parlor tricks they will adopt) when trying to balance their vision versus budgetary constraints. That being said, there were a lot of ill-placed and ill-fitting effects that could have been scrapped altogether — it would have made more sense to save everything for the big ending, but it appeared like funding had dried up by that point (at least visually) in some key spots.

According to his IMDB page, Alexander Wraith is “the Marlon Brando of our generation.” While he has a relaxed (albeit slightly wooden) charm and muscles to spare, this film is hardly evidence to back up that Herculean claim. As a pivotal emotional player in the film, he is simply adequate.

Likewise, Gail Kim, though physically able and quite easy on the eyes, does not exactly light up the screen with her presence — it is merely a paint-by-numbers affair. Her lines are delivered in a breathy whisper, almost entirely in overdub. Any sense of menace delivered by her is conveyed through musical cues or camera angles rather than through her own expression. At times you could look at her eyes and see she was thinking about the script rather than being absorbed into the moment and the character. Her fight scenes are quite watchable, though, leaning heavily on her pro wrestling background.

As stated earlier, the film is targeted at a fanbase of which I am not a part. Still, it is a pleasant enough diversion. I will not remember most of the specifics within a week, and I would suspect even the die-hards would concur.