Foley still has the itch to write

In his own words, Mick Foley isn’t the type who wants to stand around and ask ‘What if?’ It’s that kind of mentality that has him filling his time between TNA commitments with writing, acting, and whatever else he can squeeze in. 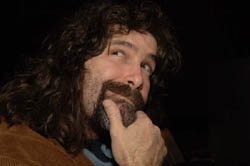 Mick Foley strikes a thoughtful pose during a recent stop in Toronto. Photo by Mike Mastrandrea.

With a history of literary success, it’s not surprising that Foley is foraying back into that world. It took him a while since his last book, but he recently found the itch once again.

“Every time I finish (a writing project), the next time I try it, it seems like something completely foreign to me — like picking up a pen and writing is an almost impossible task. But then I did a review of The Wrestler for Slate.com which I was happy with, and then a rebuttal to some words that Sports Illustrated had about me. And then I started realizing why I enjoyed it in the first place, so when I was in Ireland (recently), I wrote a chapter for a prospective fourth memoir. The other week, I had a meeting about the possibility of not only doing a memoir but also a novel and a children’s book. So I feel that creatively I’m coming from a very good place.”

The rebuttal to SI stemmed from comments made in a review of The Wrestler by writer Adam Duerson. In his review, Duerson referred to Foley as a “decidedly homeless-looking fellow,” and compared Foley to Mickey Rourke’s character in the film as a down-and-out former wrestler scrambling for a living.

“I think the guy sat next to me and thought, ‘Okay, here’s the real-life version of Randy the Ram,'” Foley theorized, “because I had in my duffel bag a Santa Claus suit that I was going to wear at a Twisted Sister show. (In my response, I explained) that I was helping out a friend by being Santa Claus for free, and that I didn’t need to do Santa Claus jobs for money to scrape by. Even the slightest rudimentary background check would have showed that I was doing pretty well.”

Though that movie wasn’t based on his life, that doesn’t mean to say that Foley wouldn’t necessarily want to get involved in movie-making in some manner. In fact, he has had some discussions with some big Hollywood names about possibly optioning one of his books for a film adaptation.

“I’ve had the good fortune to be turned down by a lot of great people,” he laughed. “I got a call a few years ago that Paul Haggis was interested in my novel, and then a few months later he won the Best Director award for Crash. Once you’ve won an Academy Award, you probably don’t need to be slumming with my novel. But there is some interest. There is a major name that is looking at it now.”

While he’s hopeful that something might arise later on, what definitely isn’t going to happen, at least for the time being, is the much-discussed reality show about Foley’s life. Though a pilot had been filmed, the project got shelved and according to Foley, “it’s dead.” Foley was surprisingly upbeat about the experience, despite it not coming to total fruition.

“We look at it like we had the experience of doing it, we have some great home movies, and we made a little bit of money. Even though it wasn’t picked up, it was a great experience. At the very least, we’re glad we gave it a try,” he said, “so we’re not sitting at home wondering ‘What if?'”