Q (Chris Champman): If you had another run in WWE who would you want to feud with?

DDP: I think there is only one person and that would be Randy (Orton). I wouldn’t go there and not be a babyface. I made that mistake once there (laughs). I think I could pull it off, too. Would I be sore? Absolutely. But, I think I could pull it off. Randy is such a great worker and such a great kid. I worked with Randy a lot. I had Randy do a lot with me in the old days. 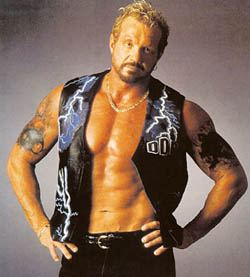 Q (SLAM! Wrestling Staff follow-up): Is there any animosity over Orton stealing your finishing move?

DDP: I called him up and told him I wanted him to use it. He said “No, Diamond. That’s yours. You made that up.” I said, “I am sure that I will still do it from time to time, but I’d really like you to take it before some schmuck does. I’d really like you to do it, dude because you’re the future.” Now 70% of the people who watch Randy think back to me.

Q (Mike Jaxon): I saw you in an interview with Gene Okerlund a few years ago. You said you had trouble learning to read all of your life. How were you able to conquer it and what advice do you have for others?

DDP: When I grew up, there was no such think as ADD or dyslexia. So, they just thought we were stupid. When you have that problem of not knowing how to read, you have to figure out how to adapt. I got through school. At some point, I knew I wanted to do movies or television. So I set a goal for myself that I was going to learn how to read. And I wrote that goal down. I was going to read a book from cover to cover. Then I married myself to that goal. I wrote that down everywhere, “Read today.” I put it on my refrigerator, on my nightstand, in my car, on my desk… the last one was on my pillow. Sometimes I would read two or three pages and it would take forever. I was reading about someone who I really learned to respect, and I wish he would have run for president, and that is Lee Iacocca.

Q (Steve Northey): What do you think about one of the most far-fetched angles in wrestling history, the angle with yourself and The Undertaker’s wife?

DDP: It was brutal. When Vince (McMahon) said, “We want you to stalk Undertaker’s wife,” it was obvious he never watched our show. I tried to be respectful and tried to be a team player. I didn’t realize how strong my character was because people wouldn’t believe that I would do that. They finally went back and let me be the babyface and I had that run with Christian. Nothing on the card, no P.R., we had one of the best matches after Rock and (Hulk) Hogan. We were right up there for second.

Q (Jared Waldo): Why did it take you so long to enter the ring as an active competitor instead of just being a manager?

DDP: I tried wrestling when I was 22. I wrestled about four times then. In a match I had with Crybaby Cannon in Quebec one time, I got thrown into the corner, and those guys would really beat on you, I had long, curly blonde hair down my back, I had a long robe, my name was “Handsome” Dallas Page, and on my shorts it said, “Nobody’s Boy.” I came rolling in with attitude. They would just beat on me in the corner and shot me off because the finish was supposed to be a clothesline. A clothesline was a finish back then. I came off the ropes and I just wanted to hit the guy as hard as I could. I blasted him open and his partner over the top rope right away and he kicked me from behind. I think I still have his print on the back of my head. They threw me over the top rope and I could not get up because of my knee and I got counted out. I thought I was going to have so much heat. I went to the back and I was ready to fight. I was 22 years old and crazy back then, and the first guy slapped me on the back and said, “Way to fight back kid.”

I didn’t go into wrestling until 32 years old. When I finally got a shot in WCW, Dusty (Rhodes) brought me in as a manager and a color commentator. Magnum (T.A.) pulled me over said “Page, listen, it’s not your fault. You’re not going to manage guys. You will still be color commentating.” I was like, “What I was doing wrong?” He said, “It’s not what you are doing wrong, but what you are doing right. The hair, the diamonds, the broads…everybody wants to be you. But you don’t draw the money, the wrestler does.” That’s the day I made a decision. I was going to go down to the Power Plant with seven months left on my deal, and learn how to wrestle.