Lanny Kean, who found brief fame in the WWF as Cousin Junior, and later worked as Moondog Cujo, has died in Franklin, Indiana, of a heart attack. He was 48. 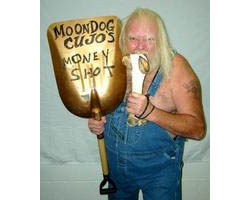 His fiancee, Sandra Deel, said that Kean went to Franklin to pick up a car, and died at 1 a.m. this morning. Wrestling was a huge part of his life, she said. “He liked to put on a show, he liked to entertain.”

The story of Kean in the WWF in 1985 is one of hitting the heights before blowing it all.

Hillbilly Jim (Jim Morris) was a major star for the expanding promotion, but he injured his leg and couldn’t wrestle. Uncle Elmer (Stan Frazier) was hired to fill the needed role, with Hillbilly Jim acting as his manager. Elmer’s health wasn’t the best, so Hillbilly Jim went back to his Rolodex and called on someone he knew from his days in Kentucky. Kean had started wrestling in 1983, in Kentucky, for promoter Dale Mann as “Luscious” Lanny Kean.

“I brought in Cousin Junior, Lanny Kane,” recalled Hillbilly Jim for SLAM! Wrestling in early 2008. “And everybody loved him, and he wrestled barefoot, and he looked like a super little hillbilly — he was perfect, and he did all the things that we needed. Then he went crazy, and they got rid of him.”

As Cousin Junior, Kean portrayed a slow, awkward-moving hillbilly, who took his orders from Hillbilly Jim. The mule kick was his big move, and he carried a horseshoe inside an ratty sack.

Gene Lewis was brought in as Cousin Luke. In 2008, he recalled his opportunity coming at Kean’s expense. “They were going pretty good and Cousin Junior, I guess he missed a few shots. I just happened to stop by and talk with George Scott, who was the booker, and I had worked for him on two different occasions in Charlotte. George knew my work and he knew me,” Lewis recalled. “He said, ‘You know, right now we’re having problems with Cousin Junior. Can you do the gimmick?’ I said, ‘Sure, I can do it.’ I didn’t know that I could, but you never say no, especially with WWF.”

Though never confirmed by the World Wrestling Federation, it is believed that a serious drug problem derailed Kean’s push, making him an unreliable performer.

Prevented to perform as Cousin Junior on the independent circuit by copyright, Kean would work as Hillbilly Junior, including a brief run with Giant Hillbilly (Uncle Elmer again).

He found success upon his return to wrestling as Moondog Cujo in the USWA, based in Memphis. With an extra 50 pounds (or more) on his tall frame, he changed his style and fell right into the Moondog gimmick that had been a staple of Memphis since the late 1970s. On his MySpace site, Moondog Cujo is billed from the “swamps of Louisiana, Kentucky.” Keen said he was about 340 pounds these days.

Later, he was rechristened Bloody Ox Brody as a tribute to Bruiser Brody, and continued the unpredictable, hardcore style that were a big part of the Moondog gimmick. He definitely worked as Moondog Cujo the longest, said Deel, wearing a pair of overalls in the ring, cut off and frayed at the knee as a nod to both the Cousin Junior and Moondog gimmicks. “That’s the one that everybody liked. They liked Cousin Junior, but they liked the mean one better.”

Recently, Kean had had back on the wrestling scene. “He’d just gotten back, doing some stuff with Jerry Lawler, and different people, Mitch Ryder,” Deel said. He’d been in decent health, with no previous heart problems. “He was in a really good spot in his life. We’d been back together for about six months,” said Deel.

Kurt Nielsen, who runs a tribute site to Stan Frazier and has sought many stories on the big man over the years, had a few chats with Kean.

“Lanny Kean was a really sweet guy. I heard different things about his reputation, but I always found him to be a really decent, easy-going man. Those qualities were the same ones that made Cousin Junior so appealing,” said Nielsen. “Lanny got the Junior gimmick from Jimmy Hart. Hart asked him if he could do an impression of Jethro Bodine (from the Beverly Hillbillies) — he clearly could quite well. That was the key to him having a healthy run in the WWF. 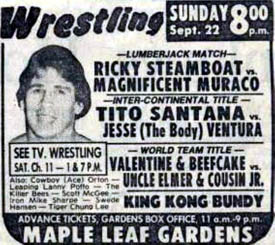 “I got to know him through my Plowboy Frazier website. Lanny worked with Frazier many times over the years, on the indy scene, in the USWA, in Frazier’s own promotion in the Gulf Coast, as well as the WWF. They were kindred spirits, who enjoyed an offbeat business that catered to their offbeat ways.

“Lanny used to call me late at night, a few sheets to the wind, to talk about his career. The stories were usually quite embellished, and we both knew he was stretching the truth, but that was just part of his charm. In the end, I think he was just glad to have people remember what he accomplished.”