Armando Estrada open to another run

Wrestling fans may recognize Hazem Ali as Armando Estrada. The former manager of Umaga and General Manager of ECW recently spoke with SLAM! Wrestling. Even though he was released from WWE just a few months ago, in November 2008, he has been quite busy opening Baby’s Steak and Lemonade fast food restaurant in Glendale, Arizona.

Although Estrada trained to be a wrestler, he had several roles in WWE. Making his debut as the manager of Umaga, fans were introduced to the arrogant, cigar breaking Cuban businessman. Estrada valued his time as a manager, as he got to be involved in several high profile matches.

“I enjoyed my time as a manager. I got to work with a lot of top talent as a manager that I might not have had the luxury of doing (as a wrestler). Every time I walked out through that curtain I became more comfortable.”

During this time, Estrada became known for his drawn out pronunciation of his middle name, Alejandro. “I created that middle name. Paul Heyman helped me come out of my shell. I started rolling my R’s and Paul told me to do it every time.” 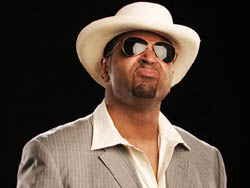 Conspiracy theories were debated among fans when Estrada stopped the practice. As Estrada explained, Umaga was about to enter a program with John Cena and creative was concerned about fans cheering him.

“We couldn’t have the audience suddenly liking us, and I was told to remove that aspect. John Cena had been getting a mixed reaction and if this top heel and his manager were getting cheered, we ran the risk of the fans booing Cena. January 1st, 2007, in Miami, I was told, ‘You have to stop that.'”

Estrada’s run as Umaga’s manager came to end shortly after Wrestlemania 23. At Wrestlemania, Umaga represented Vince McMahon, while Bobby Lashley represented Donald Trump in a match that put McMahon and Trump’s hair on the line. The creative team decided that there were too many bodies at ringside and made plans to eliminate Estrada quickly. From there, Estrada was written off of television for several months.

The next time fans would see Estrada, it would be as the General Manager of ECW. ECW was the only show that did not have an authority figure, and Estrada was sitting home at the time. Estrada enjoyed being able to perform again, but missed being at ringside.

With ECW/Smackdown tapings on Tuesdays, Estrada noticed a difference in atmosphere from Raw tapings. “The biggest difference was that we knew we were taped. We had a two-hour tape delay. Knowing that you had that safety net, you were a little more at ease. There was no take two on Raw.”

On June 3, 2008, after being replaced as General Manager by Teddy Long, Estrada became an active wrestler. His last appearance on ECW was on August 5. Estrada was released by WWE in November. Strangely enough, he traveled to all of the television tapings during the months he was not being used.

“I was still traveling every week to the television week and I was always being told you are going to start again next week. During that time we switched writers. Unfortunately, I got lost in the mix. There were 10 heels on ECW and five babyfaces.”

Estrada is working independent dates and open to another run on the national stage. “I would look for a situation where I would be allowed to perform the way Armando Estrada can perform. Without strings attached and without any handcuffs. It would have to be a situation that makes sense storyline wise and financially.”

One setback for Estrada is that WWE owns the name Armando Estrada, even though he created it. “The original Armando I came up with it was my creation, my brainchild. My name to my short laugh, every catch phrase, every mannerism, breaking the cigar, I came up with ‘Samoan Bulldozer.’ Unfortunately, even though it is my name, I can’t use it.”

Fans should be on the lookout for Armando Estrada. But, in the meantime, folks dining at his Baby’s Steak and Lemonade might even run into him behind the counter.

NOTE: Armando Estrada is available for bookings and can be reached at [email protected]