The documentary, A Hart Still Pounding, is similar to the career of its subject, Ted Hart. It started out full of promise but never reached full potential.

The documentary chronicles the life of Ted Hart. He is the son of Georgia Hart and BJ Annis. Stu Hart was his grandfather and uncles include Bret and Owen Hart, Jim Neidhart, and Davey Boy Smith. Given this pedigree, it would be surprising if Ted Hart did not choose wrestling as a career.

The first thing viewers will notice is that the documentary is poorly lit and the audio quality is sometimes lacking. At one point, it seems as if Hart does a portion of an interview via cellphone. Stephane Dion’s final video before he was canned looks like an Academy Award for best lighting compared to the Hart documentary. 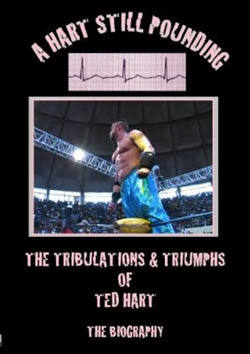 Hart drops a couple of F bombs in the documentary which is not surprising or offensive. The documentary interviewer also joins Hart with the F bombs which comes across as just being unprofessional. Imagine Jim Ross or Mike Tenay peppering a WWE or TNA telecast with more colourful language.

If wrestling fans can get beyond the poor production quality, the documentary offers up alot of interesting information. Hart is known as one of the bad boys of professional wrestling. He has had two chances to break into the WWE but was released both times. He also had an opportunity to become a headliner with Ring of Honor and wrestle for TNA but neither situation worked out.

Hart is candid that he is responsible for much of his bad luck. He acknowledges that he may have come across as being arrogant in the past. As the documentary progresses, one senses that Hart has learned from previous mistakes and is taking a more humble approach to the business.

It is easy to understand why Hart may have developed an arrogant demeanour. He was the youngest person ever to be signed to a WWE developmental contract at the age of eighteen. Hart trained under Dory Funk Jr. and worked with future wrestling superstars like Kurt Angle and Christian Cage. All of this was not meant to be as he was cut by the WWE.

After being released by the WWE, Hart worked for a number of independent promotions including Major League Wrestling and Jersey All-Pro Wrestling. Hart cites his time with JAPW as being the most rewarding.

He wrestled with TNA and a couple of matches with Ring of Honor. Hart expresses regret at not having signed with TNA but cites TNA being like the Canadian Football League and the WWE being the NFL. Hart also explores why he did not catch on with Ring of Honor. In perhaps one of the most infamous indy matches in the last ten years, Hart was seen as grandstanding during an ROH match in 2003. He performed many moonsaults and a shooting star press from the top of the cage after losing the match. Other wrestlers saw Hart’s behaviour as trying to put himself over at the expense of others. He only worked one ROH show in 2004.

Hart was also a part of the failed Wrestling Society X project that brought pro wrestling to MTV. He cites a lack of wrestling knowledge among the production crew as being the reason the show enjoyed limited success.

In 2007, it seemed as if Hart had made his way back into the good graces with WWE. He wrestled in Florida and for Ohio Valley Wrestling, both WWE developmental territories. Unfortunately, Hart was released from the WWE in October 2007. It is obvious this setback still weighs heavily upon Hart.

Hart has moved on to wrestling for Triple A in Mexico. He considers Mexican wrestling fans to be true fans. Hart has gained immediate success having worked the equivalent of Wrestlemania in Mexico. He is currently wrestling in Mexico full-time with Jack Evans and seems to be enjoying the experience.

One of the most enjoyable aspects of the documentary is seeing Hart in conversation with fellow wrestlers. Vampiro states that Hart is the future of the wrestling business. There is also a very candid conversation with Bobby Lashley about the rigors of the travel in pro wrestling.

After watching the documentary, most wrestling fans will think Hart could be a main headliner for almost any federation in the world. His highspots are some of the most incredible moves seen since The Dynamite Kid. He also has plenty of charisma that should carry over well to promos. It is very possible the second half of Hart’s career will be more successful and productive than the first act.