At first, hearing that Greg Gagne, Jim Brunzell and Buck Zumhofe have opened a wrestling school, the initial reaction is usually, ‘Wait, what year is this?’ But to hear Gagne tell it, the three veterans still have a lot to offer future generations of wrestlers.

“I’ve coached football and I’ve coached baseball, and I’ve had very successful teams and it all comes down to the fundamentals and techniques. If you can get that down, the rest of it after that is just experience in the ring, and getting the work,” Gagne told SLAM! Wrestling. “We can teach them the old stuff, we can teach them the new stuff — and we can blend it together.”

There is little arguing with the pedigree of the trio of primary trainers. All three were trained by Greg’s father, Verne Gagne, and wrestled for decades. Gagne teamed with Brunzell to form the High Flyers tag team, one of the great duos of the 1970s and early ’80s; Brunzell would partner with B. Brian Blair as the Killer Bees, one of the top teams of the 1980s as well. Zumhofe was a regular in the American Wrestling Association, the promotion run by the Gagnes.

The invitation-only Gagne camp was run out of a barn for a number of years, and the graduates are an absolute who’s who of professional wrestling: Ric Flair, Iron Sheik, Baron von Raschke, Blackjack Mulligan, Blackjack Lanza, Ole Anderson, Lars Anderson, Gene Anderson, Ricky Steamboat, Larry Hennig, Ken Patera, John Nord (The Barbarian), Chris Taylor, “Playboy” Buddy Rose (to name a few). The training was mainly out of the ring, with lots of cardiovascular drills, squats, and the like.

Gagne reminisced on his time at the camp. “I was trained longer than the other guys. I had Billy Robinson training me for a number of months. I trained, actually, for two years before I went in the ring. My dad said, ‘You’re going to have to be able to handle anybody.’ So I had a pretty good background. There weren’t too many that I don’t think I could handle.”

When the AWA closed down in the late 1980s, Gagne tried a few different things before hooking up with World Championship Wrestling, where he spent a couple of years.

“That was just total chaos with that group down there. They didn’t know what they were doing. When Eric Bischoff got in control of it, he didn’t want anybody in wrestling really in there that knew anything,” said Gagne, who claimed that he was the one that brought the competing factions idea to Bischoff’s attention. It would, of course, become the New World Order angle that changed the wrestling business, knocking the World Wrestling Federation from the top perch. “I laid out that whole two league thing for him and everything, then they let me go because they said it wouldn’t work. Then after they got rid of me, a few weeks later they tried it on TV. I just never let them know how it should carry out all the way through.”

Back in Minnesota, Gagne got involved with his kids’ sports, and worked at a friend’s Mitsubishi dealership in Bloomington. His television experience came in handy, doing marketing and commercials. His oldest son, J P., made it into the minor leagues of baseball after graduating from Notre Dame; his daughter played basketball at Northern Colorado; his youngest son is now done school.

He missed wrestling, however, and lobbied to get a job with World Wrestling Entertainment. That eventually led to a role in Louisville, Kentucky, at the Ohio Valley Wrestling training camp, which is no longer associated with WWE. Gagne found a kindred spirit in Al Snow, who he praised, and said that they trained students the same way. When he traveled to Atlanta to the Deep South Wrestling training camp (also no longer WWE-affiliated), Gagne was stunned at how different it was.

“The kids in Louisville had more technique and were better trained. In Atlanta, they weren’t. They didn’t even have the fundamentals down of even tying up right,” explained Gagne. “They were trained by people who weren’t knowledgeable, I guess; I mean, they’re knowledgeable in the ring, but they were never main eventers, never knew how to make money and what they really needed out of it.”

The 60-year-old Gagne thought he was done with wrestling when he parted ways with WWE, but in the summer of 2008, he was approached about training two students. Gagne only agreed to work with them if they showed improvement on their own week to week, which they did. 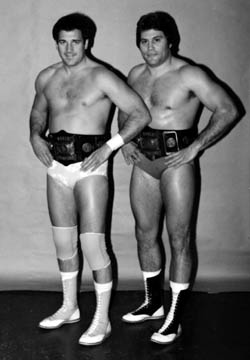 Soon, he was thinking about training again — and the past. Gagne continues to work at the car dealership as a manager, and is always surprised at how much people like talking about wrestling. He figures that 70% of the people that he deals with ask him about something from the days gone by.

“I couldn’t give up my job and survive doing training camps, so that’s how we came up with the idea of the stories, trying to bring the people, and the younger people, up to how wrestling got to where it is today, and who the real people are who built the foundation for what wrestling is today,” Gagne said.

The training facility, in Mound, Minnesota, is not in a barn, “but it’s close,” laughed Gagne. He envisions being at the school on his days off, as will Brunzell. Other trainers include Heather “The Virgin” Zumhofe (Buck’s daughter), who has been wrestling nearly 10 years, Sammy “The BullDog” Savard, Mystik Sexton, Erik Lockhart, and Paul Brewski. The Zumhofes have been running wrestling shows for years, and will provide places for the students to show off their skills. 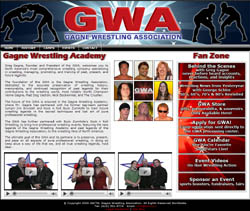 On the Gagne Wrestling Association website (www.gagnewrestlingacademy.com), Gagne will be telling stories from his decades in the business, and wrestling historian George Schire will be spinning tales as well. There will be related products too, said Gagne, though they are prevented from using the AWA logo, or anything related to it, because all the rights have been sold to Vince McMahon and the WWE. The goal is that some additional revenue will come in with the extra merchandise, like posters.

Gagne admits he is quickly getting up to speed on some of the newer developments in pro wrestling training, like the Internet. He was frustrated that the website developers jumped the gun on the site, and launched it early. “We’re trying to get caught up on that now,” he said. Yet there have already been six serious inquiries, he said, “and we’re not even up, really.”

It’s a very positive Gagne who is starting to get the word out about his school. He’ll be doing lots of media around Minnesota, and spreading the gospel of old-school meets new-school. But he is also dreading it a bit: “I hate hitting those ropes, I hate taking those bumps again, but I took some this summer. You just have to to train them.”