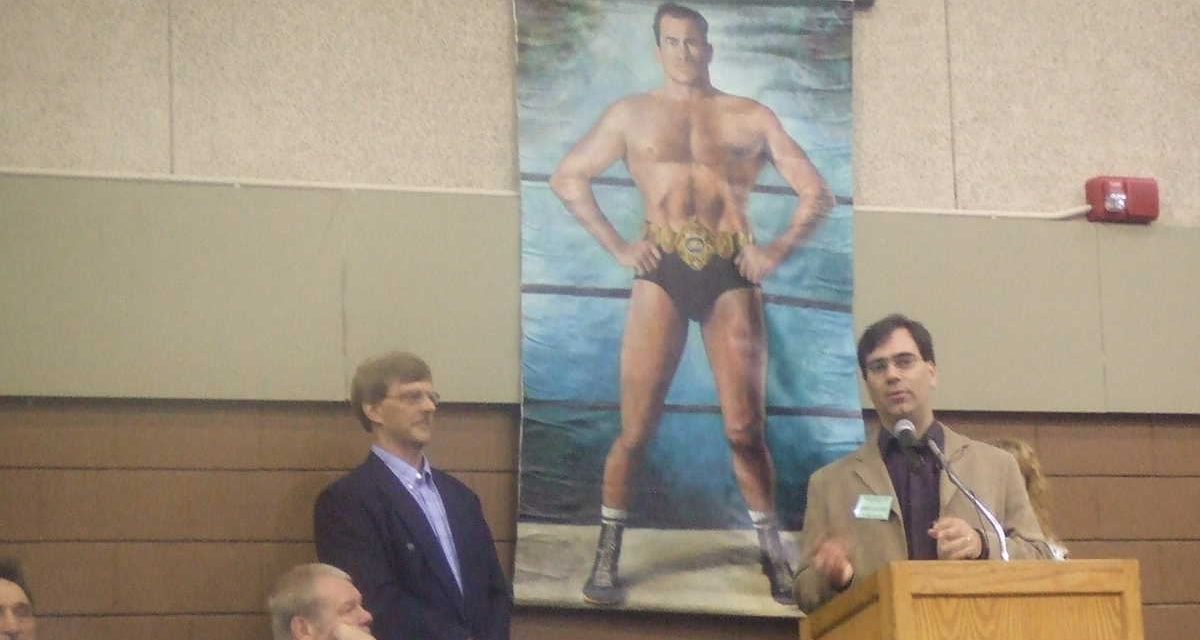 This past weekend, Greg Oliver and Steven Johnson were the recipients of the James C. Melby Award, an honor only very briefly mentioned by a modest Greg Oliver in his article on SLAM! Wrestling. As Jim’s daughter, I feel that this accolade deserves further mention, particularly considering the controversy which occurred during the event banquet and subsequent web discussions. 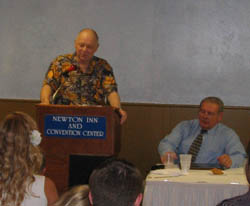 Anyone who knew my father or knows of his history realizes that he defined himself as a professional writer. Jim Melby began his writing career in professional wrestling at the age of 15, when he took over a local newsletter. Having been a wrestling fan all of his young life, this publication is the foundation for what became his niche in the wrestling world. From this small, local fan letter, Jim went on to partner with Norman Kietzer in Kietzer Publishing known for the numerous nationally distributed magazines. In addition to these publications, Jim also continued to work locally with Wally Karbo, Verne Gagne and the DeRusha family in the AWA territory writing and producing the programs sold at live matches. 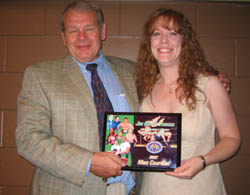 Over the years, as the wrestling industry evolved and the AWA faced its demise, Jim pursued other professional interests, utilizing his experience and knowledge as a writer while staying involved in wrestling as a sideline. His last ventures included ring and career histories published under the title Wrestling Facts, contributing articles and columns to SLAM! Wrestling and Wrestling Revue, and writing Gopherland Grappling, which was the first in what was to be a trilogy of books about the history of professional wrestling in Minnesota. At the time of his unexpected death at the age of 57 on February 11, 2007, he had completed the first five chapters of the second book.

During the 2006 George Tragos/Lou Thesz Professional Wrestling Hall of Fame award ceremony in Newton, Iowa, Jim was surprised to find himself honored with an award recognizing his years of professional writing, research and collecting. (He was writing a piece on the ceremony for SLAM! Wrestling: Family & faith dominates Tragos/Thesz induction.] The award reads: “The International Wrestling Institute and Museum, in honor of outstanding achievement in chronicling the history of professional wrestling and promoting the sport through his writing, recognizes the following person for his outstanding work. James C. Melby for the year 2006. Be it known that henceforth this award will be known as The James C. Melby Award.” Unfortunately, Jim died before the next year’s presentation.

In 2007, the award was presented as wished by Jim to Mike Chapman, the Executive Director of the Dan Gable International Wrestling Institute and Museum. Mike is a prolific author with 19 currently published books; an avid collector who lost 40 years worth of archival materials in the recent Waterloo flooding that damaged the museum, and a tireless preservationist and promoter of wrestling both amateur and professional as evidenced by his dedication and work at the museum. It was my honor and privilege to be allowed to present the James C. Melby Award to Mike Chapman at the 2007 induction ceremonies.

This year, I was once again asked if I would like to present the award in my father’s stead to Greg Oliver and Steven Johnson. Greg and Steven are both trained, professional journalists with combined decades of published works in wrestling and other areas. In print, they are perhaps best known for their “Pro Wrestling Hall of Fame” series of books. Additionally, they perpetuate the long tradition of promoting wrestling in writing utilizing the technology of the internet with the SLAM! Wrestling and SteelBeltWrestling websites. 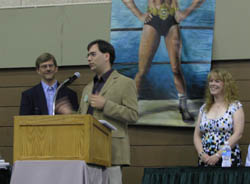 Steven Johnson looks on as Greg Oliver addresses the audience this past weekend.

My father was a man and a writer known for his integrity, honor and professionalism. These are the attributes recognized by the award named after him. It is on these qualities that the induction committee nominates individuals for their contributions to the preservation of wrestling’s history.

Although the award is recent and the list of recipients is short, it is without a doubt elite and prestigious. During his life, my father was proud to stand beside these men and call them colleagues. Since his death, I am just as proud to publicly recognize these men by my involvement at the Hall of Fame induction ceremonies.

Shelley Bonin is the daughter of Jim Melby. Unlike her dad, however, she doesn’t wear a tux much.