Adrian Walls has carved a nice little niche for himself in Alberta as the heel champ of Lethbridge’s PowerZone Wrestling. 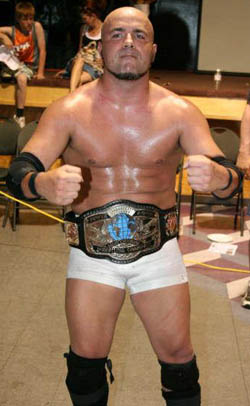 A rivalry has been building in PZW the last few years, one pitting Walls, an outsider of sorts, against his overseers as he goads them and fans alike with hubris of his mastery over mixed martial arts.

“I am an MMA guy. I was a martial artist and fighter before pro wrestling and will continue to do so if I can. I enjoy the sport so very much. Tim Strom? Not so much,” Walls said of the man who established PZW, whom he claimed “despises MMA.”

The promotion, itself no stranger to hyperbole, launched a volley in return.

“Adrian Walls has been the PZW Heavyweight Champion for nearly a year and has done a successful job of embarrassing the PZW Board of Directors by continually proclaiming his skills in mixed martial arts as the reason he has been triumphant for so long,” declared PZW’s Commissioner Jim Dandy, adding the board eagerly awaited a pro wrestler to take away Walls’ belt.

Truthfully, Walls has been a long-time admirer of wrestling and grew up a Stampede Wrestling fan. Perhaps fittingly, he began his pro wrestling training in January 2001 under former Stampede mainstay Hercules Ayala in St. Albert, Alberta.

“Somehow I stuck through it despite not being a great student or a quick learner,” Walls admitted. “A couple other students in the class were younger and picked it up a bit quicker. I had the technical part down. I had a good ground game as well, could amateur and mat wrestle and had some submissions. The high flying and fancy stuff, not so much. And that has never really changed.”

He found the class challenging, a combination of his being older than many of his other classmates at the age of 25, and the fact Ayala left much of the training to locals he brought in.

“I was a bit disappointed, honestly, but kept at it while I was there,” he said. “The training was everything you heard of — tons of bumping drills, chain wrestling, learning all the moves, trying new ones out. We did some very short matches in class under his eye. We landed on our heads a few times; the usual stuff that happens. The bumping was really hard at first. I remember having to leave class to puke and coming right back after.”

Walls would focus his budding career in Alberta, first refereeing for Prairie Wrestling Alliance while still training, and eventually debuting November 4, 2001 against JD Michaels for Canadian Championship Wrestling. But with CCW crowds dwindling, Walls moved on to Can-Am Wrestling in June 2002.

“I had no clue what I was getting into. I’d never been on the road, around a group of vets, nothing. On the trip, amongst others were Sarah Stock — just beginning her career — Massive Damage, Steve Rivers and Phil Lafon. This was an insane amount of talent packed into one van. It was during those couple weeks, my first on the road, that I really started to learn about the business… I may have learned more in those two weeks than any other two weeks in my career.”

He also developed a love for being on the road. Walls began accepting as many bookings as he could, wherever possible and ended up traversing Western Canada. At 5-foot-11 and 210-pounds, he realized his comparatively small stature would likely preclude any shot at the WWE. So becoming known on the indies and maybe getting a chance to wrestle overseas and the U.S. became his main goals. But a stop in British Columbia nearly ended his career.

“I went out on a whim to train with Vance Nevada in ECCW (Extreme Canadian Championship Wrestling) hoping for a spot. First night of training I take a bad bump and dislocate my sternum. It was a godawful injury and I had had a couple already to that point, getting pretty shaken up in the Northwest Territories and again in Winnipeg. I was bedridden and couldn’t move for a couple weeks. I had it, that was it. The entirety of 2003 was a write off at that point.”

Moving back to Alberta to get on with his life, he one day received an unexpected call from wrestler Chris Wayne to do a show for Real Canadian Wrestling. Walls took the booking and has not stopped wrestling since.

In 2005, maybe his most important career discovery appeared by chance when he spotted the word “wrestling” while leaving a gas bar in Vauxhall, Alberta. He picked up a Lethbridge newspaper and read a story about PZW, then a newly forming wrestling promotion. He e-mailed them when he got a chance, and soon after received a call back. Walls would wrestle the main event of PZW’s first show in October 2005 against JD Michaels. Now the company’s champion, he often wrestles in front of crowds between 300 and 500 and appears often on Shaw Cable’s “Match of the Week.”

“Funny how the business comes around full circle.”

“We have been working together in different promotions since 2000,” said Wayne, remarking he could always trust Walls with his body in the ring.

He believed Walls made an ideal champion for his promotion because Walls is able to work with anybody.

“I don’t have to worry about his ego getting in the way of business,” said Wayne. “I can trust him to do what is best for the show, and I can put him in there with a high flier, a 300-pound monster, or a classic 1980s type heel and know he will give his all and what the crowd wants to see.” 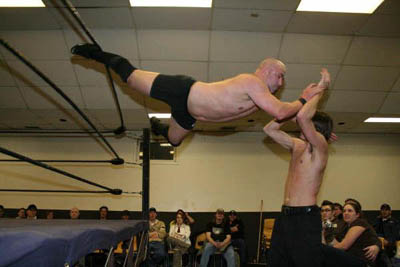 Adrian Walls leaps through the air.

In spite of an active schedule, Walls was still able to participate this year in Tony Condello’s Northern Death Tour. There, he ran into Nevada while also meeting some newer indy faces.

“Vance Nevada, in the past couple of years, has been a huge influence on me. He has really taught me the business side of the business, the entertainment side of wrestling,” said Walls.

“In my opinion, Adrian Walls is the most underrated talent in Western Canada today,” said Nevada. “Any promoter who doesn’t book this guy is throwing money away.”

Krysta Lynn Scott, also on the tour, said she found Walls helpful to all the newer wrestlers looking for advice.

“The Death Tour is exhausting both physically and mentally, so it is crucial to have guys like Adrian who you can lean on when you need it,” she said. “He takes pride in every one of his matches and any fan who watches him will back that up.”