Cutting it close getting from NY to Texas

I had only been home from Labrador for a few days when it was time to take off again. I was set to be away on a fairly short trip, only about ten days, and was especially excited for the Pro Wrestling Hall of Fame show in Amsterdam, New York — my first show of the trip.

The PWHF show this year was run by Squared Circle Wrestling (2CW), a company I work for frequently. I drove to Amsterdam alone, and regretted my decision almost immediately, being pulled over twice on my way to the show and then having to navigate through the surprisingly complicated streets of the small town. I wrestled Nikki Roxx on the show, one of my favourite opponents, and the show wrapped up fairly uneventfully.

I stayed in Amsterdam until everything was torn down, and went out to eat with some of the other wrestlers afterwards. I didn’t get back to Syracuse — where I was staying — until after 5:00 a.m., and I realized that, no matter how many times it happens, there is still no worse feeling in the world than watching the sun come up and having not gone to bed yet.

I collapsed on my bed sometime around 5:30 a.m., and woke up only a few short hours later to catch my flight to Austin, Texas. I had worked for Anarchy Championship Wrestling once before, along with my frequent traveling partner, Zack Storm, on one of our two trips to the southern U.S. We had, despite my car’s protests, driven through the night from northern Arkansas to San Antonio for a Sunday afternoon show. This time, however, I was flying in to Austin for a Saturday night show for a four-corner match with Sara Del Rey, Miss Dyslexia, and Rachel Summerlyn.

Because I had to fly in that day, my flight was cutting it pretty close, as my plane was landing in Austin sometime around when the doors would be opening for the show. I rushed through the Cincinnati airport crossing my fingers that I would catch my connecting flight on time, knowing that this was the one and only flight that would get me to Austin in time for the show. 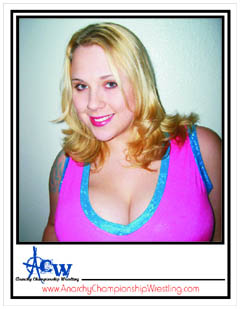 I arrived in Austin on time, and thankfully had brought only a carry-on bag to make my trip to the venue quicker. I got to the building after a quick stop for my ever-present energy drink, and was happy to have arrived before the show started. I came up on the losing end of my four-corner match after being eliminated by Rachel Summerlyn, whose work I encourage everyone to check out if they haven’t seen it yet.

After the show, a few of us went out to eat at iHop, a fairly routine event that was made much more interesting when our waitress took time out of her busy day to tell us about her stalker ex-boyfriend, and how he ended up being shot by her neighbour. Knowing that we couldn’t top that, we all just went to sleep for the night after iHop, and I was back at the Austin Airport the next morning, only 15 hours after I had arrived in Texas.

My next column will consist of part two of my trip, which was spent in Tampa, Florida.