Big names still on top after Night of Champions 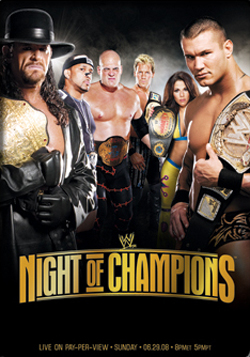 WWE’s second gimmick pay-per-view of the month turned out to be a good one. Excitement was sure to be abound as World Wrestling Entertainment presented Night of Champions on Sunday night. Following Monday’s much ballyhooed draft, Smackdown! retained the two most important titles in the company. Both World Heavyweight Champion Edge and WWE Champion Triple H looked to keep it that way in the evening’s co-main events.

In all, eight titles were on the line at American Airlines Center in Dallas, Texas, and tension was high inside the arena, where Triple H and John Cena battled for the WWE Championship in the main event — with Triple H looking to avenge his loss to Cena at WrestleMania 22.

The two played a game of oneupsmanship in the early going, but Triple H took over, running Cena all over the ring with power moves. Cena starts to land but eats a high knee and a “face crusher.” Trips goes for the Pedigree but gets out and hits the Throwback. Cena heads to the top rope and hits a guillotine legdrop. Cena ducks a clothesline and hits a tilt-a-whirl slam and sets Triple H up for the Five Knuckle Shuffle, but takes too much time again and Triple H blasts him and hits a spinebuster.

Triple H waits for Cena to get up and delivers a kick to the midsection for the Pedigree, but Cena sends him over the top rope, where HHH lands awkwardly on his left knee. Cena goes outside and starts to work on the knee, putting it into the ring post twice. Cena hits a second chop block and tries to and finally gets the STFU, but Triple H escapes quickly.

Cena goes for the FU, but Triple H counters into the Pedigree, but can’t cover right away and gets two and 5/8ths. Both men are slow to their feet. but Cena hits the FU. He, too, is slow to cover and gets two and 3/4ths.

The referee’s count reaches eight before they start to stir. The two start exchanging right hands for about 30-45 seconds before Triple H lands three in a row, but Cena hits a tilt-a-whirl slam and calls for the Five Knuckle Shuffle for the third time and finally hits it.

Cena goes for another FU, but HHH hangs onto the ropes. Triple H goes for the Pedigree, but Cena counters into the STFU in the centre of the ring. Triple H almost gets to the ropes, but Cena pulls him back into the centre but HHH counters into the Crippler Crossface. Cena is fading. A large “Cena” chant pops up. Cena lifts HHH into the FU, but he gets out but Triple H hits the kick to the midsection and a Pedigree that finally puts Cena away.

A dejected Cena walks to the back while Triple H celebrates in the ring as the show fades to black.

The next WWE pay-per-view is the Great American Bash on July 20.

After a lengthy video package, Jim Ross and Mick Foley welcome us to the broadcast, which is presented in WWEHD.

Interestingly enough, all four of these men are property of ECW while the titles they are wrestling for are seemingly property of Smackdown!.

The first interesting move of the match comes when Finlay crotches Morrison on the ring apron. The Miz takes out Finlay after the move and they go and retreive Hornswaggle, who had retreated up the ramp. Hornswaggle throws his jacket at the duo in disgust and buys enough time to run to Finlay, who, with the help of his son, dispatchs the champs to the outside.

After regrouping, Morrison hits Finlay with a dropkick that turns the tide. And again, Morrison and Miz do what they do best ‹ cut off the ring with quick tags and sly double-teams not seen since the heydays of Shelton Benjamin and Charlie Haas.

Finlay is finally able to get the hot tag to Hornswaggle, who comes in and hits a hurricarana, a Stunner and a bulldog on Miz. Hornswaggle goes off the ropes, but takes a knee in the back from Morrison. Now the egomaniacs take their turns picking on Hornswaggle.

With the champions mocking Hornswaggle on their knees, he fires back with some punches, but is hit with a clothesline that puts him back down.

Miz misses a move and goes down, but he makes it to Morrison before Hornswaggle makes it to Finlay. Morrison hits some degrading slaps on Hornswaggle, but he escapes a body slam with a poke in the eye and makes the tag.

Finlay comes in and is “tougher than Irish coffee” according to Jim Ross. (Which is funny to me even though I have no idea what Irish coffee is.)

Finlay hits the Celtic Cross on Morrison, but Miz knocks Finlay off the apron before Hornswaggle can hit the Tadpole Splash. Morrison recovers and slams Hornswaggle off the top rope and it’s academic from there.

Guerrero works over Hardy’s left knee early on as does Bam Neely while Guerrero distracts the referee. Hardy tries to mount some offense, but Guerrero administers a chop block to bring him back down. Guerrero goes for the Frog Splash, but rolls through it as Hardy moves out of the way. Hardy follows up with a big clothesline but cannot capitalize until a Side Effect gets two.

Hardy goes to the top but Chavo pulls him down by the knee and slaps on a half Boston Crab, but Hardy gets to the rope. Guerrero puts on another half-Crab but Hardy gets out again. Guerrero hits a kick to the midsection and goes for the Three Amigos, but Hardy counters the third one into the Twist of Fate for the pin.

Henry gets written out early on, leaving Kane and Big Show to slug it out. That doesn’t last long, as Kane is put over the top rope and hits his back hard on the apron. Eventually, two doctors make their way down to check on Kane. In the ring, Show hits a big slam on Henry.

With both Henry and Show down, Kane comes back to a big applause and hits the flying clothesline on Henry and some uppercuts on Show. He goes back and forth splashing the two in the corner before being caught in a bearhug by Henry. He breaks out and Irish whips Henry right into a big boot from Show. Then Kane and Show team up for a double-chokeslam on Henry and go back-and-forth trying to pin him.

They give up and that and continue to go at it. Kane heads to the top for a flying clothesline but is caught in the choke slam, which only gets two as Kane gets the shoulder up. Show goes to the top rope for some reason and Kane hits a big superplex. While he’s down from the move, Henry hits the World’s Largest Splash for the 1-2-3.

Henry celebrates like he won the Olympics while the Land of Extreme has its title back!

Eve Torres is backstage with Batista. He says there’s no way he’s returning to RAW empty-handed and he’ll be the man on RAW. In comes John Cena who welcomes Batista back to RAW. Then in comes CM Punk, who hopes both of them win titles tonight because he’s got the Money in the Bank briefcase.

When they go to introduce DiBiase’s partner, he grabs the mic and says his partner just texted him and said he’s running about 10 minutes late. He says he’ll take them on by himself.

Rhodes starts against DiBiase, but DiBiase says he wants Holly. Holly comes in and Rhodes attacks him and hits a DDT. DiBiase then introduces Rhodes as his partner. Rhodes tags in DiBiase and he puts Holly in the Million Dollar Dream that ends with a Russian Leg Sweep for the pin.

Todd Grisham is in a luxury box with John “Bradshaw” Layfield, who is wondering why he is not on the card. Grisham informs him he is not on the card because he is not a champion. JBL grabs the mic and cuts a promo that says, since he Mr. McMahon is incapacitated, he is the richest person in WWE. He then rips Dallas. it goes nowhere.

RAW’s newest acquisition, the Jamaican Sensation, Kofi Kingston is stepping up for his first title shot in WWE and first pay-per-view match. I was hoping for Disco Inferno.

Jericho plays the chicken heel early on but Kingston catches up to him. Kofi hits a lot of moves and leaps up onto Jericho on the top rope but Jericho dumps him to the outside of the ring and rams his back into apron.

Jericho takes it to Kingston, hitting him with everything but the kitchen sink. He locks Kingston in an abdominal stretch, but Kingston flips him over but runs right into a drop-toe hold on the ropes.

The two start going at it with Kingston gaining some confidence. He hits a hurricarana for two but can’t capitalize on it. Jericho gets him down and hits the Lionsault and locks in the Walls of Jericho. With the move locked in, Shawn Michaels runs in through the crowd, hits Sweet Chin Music on Lance Cade outside the ring and goes on the apron but Jericho knocks him off. But it distracts Jericho enough for Kingston to hit Trouble in Paradise for the win!

The two go back-and-forth before Mickie gets an edge and Paul Burchill pulls Katie Lea to the outside. When Katie gets back in, Mickie is still relentless but Katie hits a back-body drop and starts to take control. Katie throws Mickie shoulder-first into the middle turnbuckle and it continues to hurt Mickie throughout the match.

Mickie hits a hurricarana followed by a kick and a snapmare for two. Mickie goes for the bulldog but Katie counters into an armbar which has Mickie screaming in pain. She eventually gets out with a throw. Mickie is thrown back into turnbuckle but eventually hits the tornado DDT for the comeback win.

Batista’s power is the story in the early going including a Goldberg-esque Jackhammer for two. But the tide turns for Edge, as he throws Batista into the stairs and hits a baseball slide on Batista which sends him into the ECW announce table.

Edge then locks in a chinlock Randy Orton would be proud of, but Batista powers out, but eats a drop toe hold into the middle turnbuckle. Edge gets Batista into another chinlock which Batista escapes again. Edge goes to the top rope but Batista pushes him to the outside.

Both men are wobbly. Edge goes for the spear but runs right into a big boot. Batista goes to the top rope and Edge counters yet again, this time with a dropkick. With both men down, the EdgeHeads wheel Vickie Guerrero down. Edge goes for a spear, but Batista leapfrogs him and hits a spinebuster. The ref goes for the count, but Guerrero pulls Mickie Henson out of the ring. Edge goes for another spear, but Batista side-steps him into the ring post and to the outside. With the ref near the countout, Edge pulls Henson out and smokes him.

Guerrero calls for another ref and out comes Chavo Guerrero. With Vickie looking at Chavo, Batista pulls Vickie into the ring and gorilla presses her onto Hawkins, Ryder, Chavo and Bam Neely. With Batista distracted, Edge nails Batista with the title. Chavo recovers in time to slide in to make the count.

After the match, Mick Foley wonders how Vickie Guerrero still has a job.