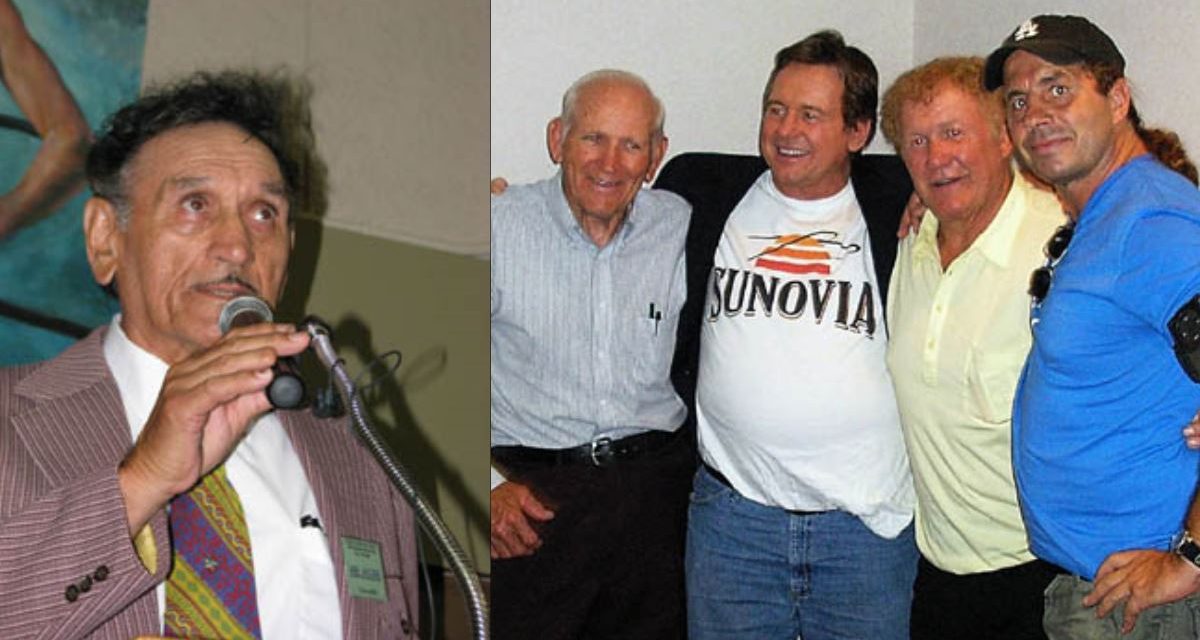 WATERLOO, Iowa – It was an international event Saturday, as the lives of two Canadians — one deceased and the other very much still alive — a Kiwi good guy, two late American stars, and a Japanese meanie were celebrated with the tenth annual induction ceremony for the George Tragos/Lou Thesz Professional Wrestling Hall of Fame.

The theme of the induction ceremony was easy to identify: perseverance.

With the state of Iowa having been ravaged by flooding earlier this month, it would not have been a surprise for the ceremony to have been postponed. Yet, there were living inductees Rowdy Roddy Piper, Abe Jacobs and Masa Saito on the dais accepting their induction plaques, and Pam Gunkel and Bret Hart accepted the accolades for their fathers, Ray Gunkel and Stu Hart. 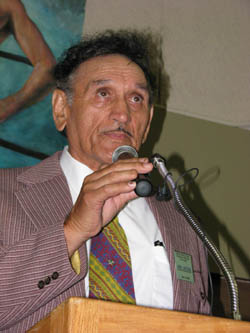 Perhaps Jacobs, the New Zealander who now lives in North Carolina said it best: “Could you picture a world without wrestling? I can’t.”

So the induction ceremonies, normally held in the Dan Gable International Wrestling Hall of Fame and Museum, were forced to be moved to the nearby Five Brothers Convention Center. The cavernous room dwarfed the ceremonies, perhaps, but the spirit wasn’t all that different than previous events held in the museum itself.

The museum’s founder and director Mike Chapman tried to put a positive face on things, and vowed to keep fighting to rebuild the museum, which faces a quarter of a million dollars to fix the flood damage. His own personal collection of wrestling history, gathered over 40 years, was destroyed in the basement, including correspondence from famed grapplers, magazines and the gift shop’s inventory.

“So what do we do, quit? I’ve never known a wrestler who quit yet,” vowed Chapman. “We’re wrestlers. We’re going to fight back.”

With its predilection towards professional wrestlers who have good, solid foundations in amateur wrestling, the Tragos/Thesz hall of fame acceptance speeches often address those backgrounds. 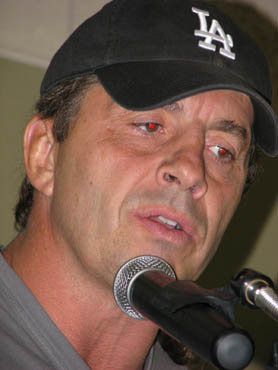 Bret Hart in the afternoon.

Bret Hart talked a little about his father, Stu, who died in 2003, and his love of grappling and stretching newbies to the business, but he also addressed his own past in the amateur game.

“I learned a lot in my pro wrestling career, but I think fundamentally, I learned more about life in my amateur wrestling days,” said Hart. “I learned most of all humbleness and respect. I think it’s those things that guided me more during my career than anything else. Certainly dedication and hard work just naturally goes hand in hand with amateur wrestling. I don’t think that I’d be the man I am if I didn’t have that background in wrestling. I thank my father for instilling that in me right from an early stage.” 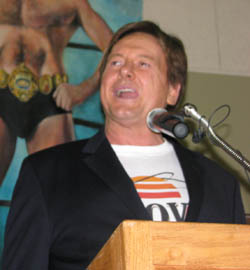 Piper used the opportunity on the stage to thank many of the men in the room, including Red Bastien, who was the best man at Piper’s wedding, and Larry “The Axe” Hennig, with whom Piper got an early break in a match with, leading to his first bookings in the U.S.

“Amateur wrestling, for me, affected the rest of my life,” claimed the Saskatoon-born Piper, paying homage to his “band of brothers” in the room. “It’s like all my fathers out there.” 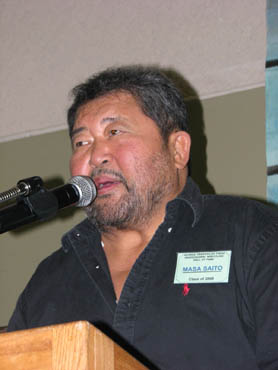 Masa Saito — Mr. Saito to many fans in North America — was quiet and quick on stage, his body shaking. “Thank you very much, American people. I appreciate it,” he said in English, before dropping into Japanese. His wife translated for the fans, and Saito wrapped it up by apologizing for being so mean to American wrestlers over the years. 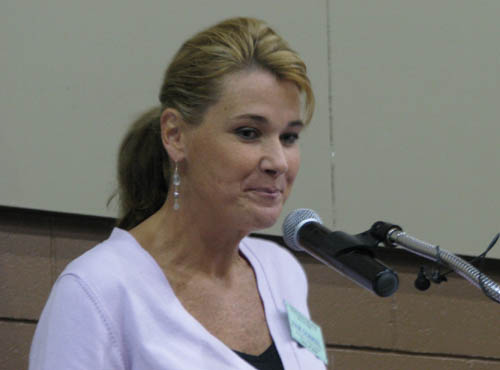 Pam Gunkel, the daughter of honoree Ray Gunkel, who died in 1972, and Wendi Weaver, the daughter of Johnny Weaver and Penny Banner (Frank Gotch Award winner), who both died this year, told similar stories about growing up in wrestling.

“Wrestling has always been a part of me,” said Gunkel, who was five years old when her father died after a match. She said that people always went out of their way to be nice to her because of how famous Ray was and how well-liked her mother Ann, who promoted wrestling after Ray’s death, was.

“When I grew up, I had two groups of people — the wrestlers and the fans. That’s all I knew … that was the circle of friendship that my mother had,” explained Weaver, accepting the Gotch Award, which honors wrestlers who have given back to the world in ways outside of wrestling. 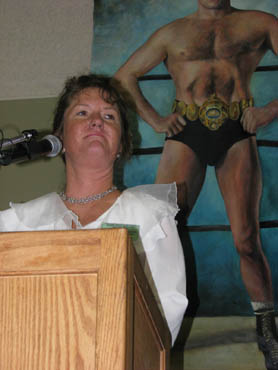 Also given out was the Jim Melby Award for excellence in pro wrestling journalism to authors Greg Oliver (this writer) and Steven Johnson. 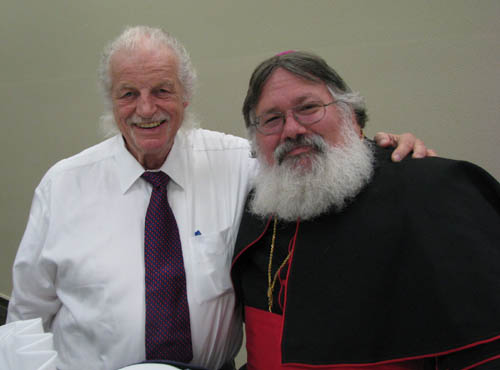 The battles ahead for the museum, however, were perhaps best put in perspective by Father Jason Sanderson, who wrestled as The Wolfman, and received the Lou Thesz Award from Thesz’s widow Charlie. The award, which is about recognizing those in need, and using lessons learned from wrestling to make the world a better place, was given to Sanderson for his charity work.

On the stage, Sanderson talked about being in the Congo, and asking kids whether they followed football or basketball, which got little response. But when he asked about wrestling, they lit up and started asking about Stone Cold Steve Austin and Hulk Hogan.

Greg Oliver would like to steal a line from Abe Jacobs that didn’t make the cut: “Nobody gets anywhere in this world without help. I’ve had a lot of help along the way.” Thanks to everyone who made the Melby Award for Steve and I possible.