Ricky Cortez: From Chrysler to the mat

“Crusher” Ricky Cortez was one of those mainstays of wrestling for an older generation of fans, a convincing bull of a worker who never strayed too far from his home base of Detroit during a career that ran for more than 30 years.

“Honestly, one of the best heels I think I’ve ever seen, better than The Sheik,” said George Steele, who broke in as The Student when Cortez was headlining cards in Michigan in the early 1960s. “He was fantastic.” 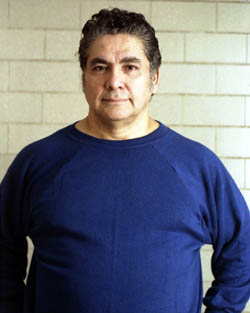 How fantastic? Mary Cortez, his wife of 50 years, recalled how proud her husband was to draw catcalls in a match against the most hated wrestler in the history of the Motor City.

“I think the happiest he ever was when he wrestled The Sheik and they cheered The Sheik,” she said. “He loved it. The madder they’d get, the better he liked it. It made his day.”

Cortez died without much fanfare May 16 in Garden City, Mich., He was 77 and, typically unassuming, didn’t want a newspaper obituary. A number of Internet wrestling forums listed his date of death as June 29, and that’s probably symptomatic of the way hometown warriors of the 1950s and 1960s get lost in the shuffle.

But people who knew him and worked with him remembered both his modest ways out of the ring and his dedication to an older style of wrestling in it.

“He looked impressive and the fans reacted to him,” said Big Jim Lancaster, who followed him as a fan and later wrestled him. “He was like a slower-moving Bulldog Brower kind of worker. He was more methodical — Brower would jump around and pound people with his gimmick — but Cortez was very believable. He always looked solid.”

Three reasons suffice to explain why Cortez pretty much confined himself to the Great Lakes area, instead of striking out elsewhere. First, he had a full-time job at a Chrysler plant for much of his adult life, usually running a tool cage. That meant a stable job with decent pay, normal working hours, and health benefits, about as far removed from the terms of ’60s-era wrestling employment as possible. 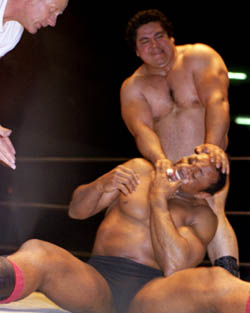 Second, he was a family man who didn’t like leaving his three children at home for extended periods. “They were getting older and they really needed their father around, so that had a lot to do with it, too,” Mary Cortez said.

And several of his co-workers said Cortez had a condition that sometimes caused him to fall asleep at the most inopportune moments, missing an airport flight because of a nap or nodding off in the corner during a match.

“I’ve actually wrestled tag team matches with him as my partner, and gone over to tag him and he’d be asleep in the corner,” Steele said. “But when he’d wake up, he’d go in like a Marine and take over.”

According to his wife, part of the explanation was that Cortez overextended himself. “He was so tired because he worked two jobs for years.”

Born and raised in Detroit, Cortez was a veteran of the Korean War, where he caught malaria and took shrapnel in his knee that caused him on-again, off-again problems for years. He broke in for promoters Bert Ruby and Harry Light in the late 1950s, billed as champion of Mexico despite his Detroit background.

Ruby liked big, strong types, and Cortez was buddies with another area resident who transitioned from bodybuilding to wrestling at the same time — Dick “The Mighty Igor” Garza. “I think he just met somebody and they said, ‘Come and try out,’ and the rest is history,” his wife said. “He was in wrestling when I met him.” 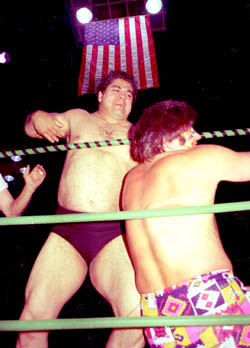 “I watched TV and I knew this big beast of a guy was always against Larry. We’re walking through the hallway and who’s coming to us but Ricky Cortez? I’m a seven-year-old kid and these guys are like giants. I was just terrified. I was just terrified by the sight of this guy and the thought that he was going to attack me.”

Cortez worked regularly against Chene and Jim Hady, and appeared some in Texas in 1961, working as a good guy in a heavily Mexican territory alongside tag partners Rito Romero and Pepper Gomez. His top victory there came in July, when he beat Duke Keomuka for a shot at National Wrestling Alliance champion Buddy Rogers.

“There’s a guy that could have hit the road and done very well for himself but he had a job at Chrysler,” said Gino Brito, who first met him in Detroit around 1959. “He didn’t work the strongman style. He could do high spots when Larry Chene was the bump man, but Bert Ruby kept telling him he was a big guy so he shouldn’t do down so easy.”

Brito said Cortez preferred realistic action in his matches, much to some of his opponents’ dismay. “He could be a little stiff. He liked the punches to really go. If he hit you on the back, you were really hit, but then he expected you to do the same. A lot of guys didn’t like to work with him at all.”

As a result, it was basically home-cooking for the barrel-chested Cortez, who worked for The Sheik in the 1960s and later for Dick the Bruiser, a friend and foe from early in his career, when the tough guy’s Indianapolis-based promotion went head-to-head with The Sheik’s Detroit office in the early 1970s. 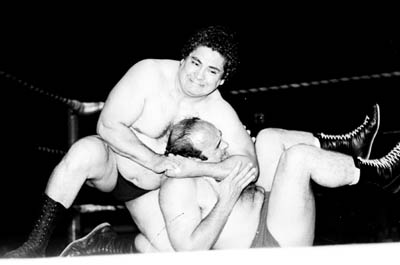 Cortez leans into a headlock. Courtesy of the Wrestling Revue Archives

“Ricky Cortez was definitely one of the last old-school workers who did love to shoot a little when he needed to or with someone who liked to work a bit,” said Rick O’Toole (Ricky Brogdon), who called Cortez one of the pleasant memories of his 22-year career. Cortez loved nothing more than to carry on about the days when he worked out at the Dearborn, Mich., police gym with a cavalcade of stars, such as Bruiser, Sailor Art Thomas, and Bobo Brazil. “Really top drawer stuff,” O’Toole said, who credited “Crusher” with supplying calming advice to him during a health scare.

Ironically, Burzynski, once scared stiff at the sight of Cortez, would later manage him as Supermouth Dave Drason for George Cannon’s Superstars of Wrestling, always driving him to shows since Cortez might potentially catch a few winks if he was behind the wheel. Instead, Cortez would deliver a seminar from the back seat on friends like Ruby, Chene, and the style they represented.

As serious as Cortez was, his career, Burzynski said, was not without some humorous moments, such as the time he employed one of favorite manuevers against a wrestler named Al Barr.

“Ricky would take a wristlock and work it, work it, look at the crowd. He’d work that wristlock, then he’d put it on the mat, put one foot on the guy’s wrist and then stomp on his hand three times. Then he’d jump in the air and come down on his full wrist and hand. The guy would be writhing in pain and bam! It made for great theatrics at the time. That was one of his signature moves,” Burznyski said.

“This night, the third time he did it, he went right through the ring, The whole ring collapsed. Through the boards and everything. It was so funny because him, Al Barr, and the referee disappear into the mat. And it’s so funny because they come springing back up like ‘What the hell happened?'”

Cortez also ran a local promotion with Mike Anthony and finally hung up his boots around 1990. O’Toole loved working for him and with him on Michigan Championship Wrestling shows because he treated everyone as equals, a far cry from some wrestling promoters.

“Ricky believed in paying top payoffs, $100 or a bit more, across the board. Most promoters would do their best to stiff you should a worker need to work twice; they would attempt to throw and extra $25 bucks at the payoff,” O’Toole said.

“Not Ricky. Ricky always said, ‘Kid, if you work twice, you get paid the full lot. If you made what Ricky would call the ‘Big One,’ $100 for one match, then if an occasion would arise where he needed you to work twice, then you would receive the full $100 for the second ‘Big One’ and leave with $200 for working twice. I know, because I did the payoffs for him a couple of times. He had that gruff, heel persona, but what a compassionate individual.”

Hardly a heel in his private life, he played the piano, wrote a couple of songs, listened to classical music and enjoyed reading — “all the things you wouldn’t expect from him. This was his opportunity to just kick back and do what he wanted to do,” his wife said. He suffered from diabetes, though Mary Cortez said he was in reasonably good health in recent years and still lifted weights until a few years ago.

He was listening to classical music when he got up to go to another room and collapsed from a heart attack just a few days before his 78th birthday. “He was doing things he did all the time. That’s what shocked me so. He was a great father and a great husband,” she said.