Contrary to how he’s portrayed on TNA TV, Jeremy Borash is more than a weaselly talking head looking to stir up trouble during backstage interviews. Off-camera, he’s a veteran of the business whose goal is to use his experience to help make TNA the best it can be.

“I just watched the DVD (recently),” Borash told SLAM! Wrestling in an exclusive sit-down. “After watching it, I thought it was fairly accurate in its description of (the genesis of TNA). But the emotion of what it was like for us back then was very hard to capture. To have a bunch of people say, ‘It was the hardest year of our life’ conveys a good story, but I don’t think anything can compare to living through it.” 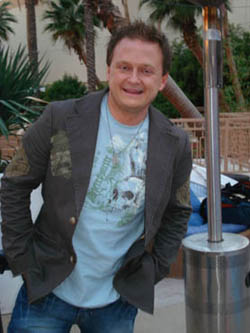 The strategy of financing itself through weekly pay-per-views was a huge gamble, he explained, simply because it had never been done that way before. While the company had its doubters, he noted that the key principals were united in their vision.

“The common thread among the very first people who were involved in TNA — Jeff Jarrett, Dixie Carter, Jerry Jarrett, Bob Ryder, myself — is that we never gave it any second thoughts. We never thought it was going to go belly up. We couldn’t even think about that.”

Looking back, Borash is glad that the perseverance and the passion of those involved paid off, and incredibly proud of what the company has accomplished in the past six years.

“Every day,” he beamed, “I wake up and I’m thankful to the Lord above that he allowed it to survive, and that it’s going to continue to prosper.”

One of the highlights in the past year, and an indication of where the company has progressed to, was the live Impact taping that took place in March. It was a night that Borash was excited to be a part of.

It’s undetermined whether the experiment is going to lead to more live shows in the past — they haven’t done one since — but if need be, Borash claimed the company has proved it will be ready.

“If there was ever any doubt that we could do it,” he said, “I think we showed we can. Our staff, our crew, our production crew — from David Sahadi to our director — they’ve been involved in 17 of the 24 WrestleManias — so they know what live TV is about. A lot of the talent have done live weekly shows (in WCW or WWE). Keith Mitchell has done more wrestling than anyone else on earth, in a production truck. So can we do live TV? I think we proved it, and from that standpoint, the night was a home run.”

While their weekly TV shows have since remained rooted in Orlando, the company has taken major strides in going on the road for other live events, including going abroad, with an upcoming trip to the United Kingdom, and a successful string of shows in Quebec and Ontario last December. Those dates were a definite highlight for the company, he noted.

“I am hoping to go back (to Canada),” he said without hesitation. “We’ve been getting rave reviews about our house shows — and the four nights we did last year in Quebec and in Oshawa, that’s where it started. I would credit that run in Canada as being the kickoff of us knowing that we could really put on great house shows. We got the confidence from those shows that we could do a great show even in front of 4,000 people. I definitely want to come back.”