Fans in attendance at the Prairie Wrestling Alliance’s show at the Extreme Zone in Edmonton knew they were in for something special when the main event was announced. During PWA Champion Chris Steele’s October 9th title defense against Tex Gaines the two men battled throughout the crowd. It was obvious that the ring couldn’t contain the two men and there was only one solution: A 118th Avenue Street Fight.

Steele arrived at the ring with a shopping cart full of plunder and it came into play quickly as Steele used the cart to slam into Gaines’ stomach, and slammed him over the head with a snowboard and a road sign. Gaines made his own use of Steele’s toys, smashing an EZ Bake oven over the champion’s head twice. 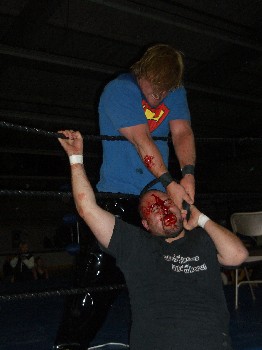 Both men were busted open early in the thrilling bout as they brawled through the crowd. Steele reversed an attempted whip and sent Gaines flying into the chairs, clearing out that section for the remainder of the match, and slammed the challenger’s bloody head into the hockey glass, leaving a red imprint as a reminder of the carnage.

The match was not without controversy however, as Steele hoisted Gaines over in a german suplex and the official counted to three before raising Gaines’ hand and announcing him as the new champion. PWA Commissioner Kurt Sorochan disagreed and claimed Steele had retained. In response Gaines assaulted Sorochan with the road sign, busting him open and then assaulted his leg with a chair. Steele seemed to care less, taking his belt and disappearing in the back as the fan favorites raced out to assist their fallen leader out of the ring.

The semi main event featured new tag team champions The Stampede Bulldogs challenged by Damage Inc’s Duke Durrango and Randy Myers. The Bulldogs won the tag team belts in the October 9th Iron Team Match and were determined not to lose the straps. The fans showed respect for Harry Smith and TJ Wilson by throwing streamers into the ring, a Japanese tradition. Durrango and Myers came very close a number of times, but in the end Myers, trapped in Smith’s sharpshooter, and Durrango, trapped in Wilson’s ankle lock, had no choice to tap out. After the match they denied they did any such thing and demanded a “I Quit” match at the December 4th show to finally settle the feud.

The show kicked off with a high flying affair between popular homegrown talent Marky Mark and lightning quick Pete Wilson. Mark teased the crowd with Eminem before his music switched abruptly to “Black or White” by Michael Jackson. Mark, sporting a classic Jackson t-shirt dominated Wilson early on but Wilson came back with a 450 splash off the top to the floor. Marky showed his own aerial ability with a Arabian moonsault to the floor and a dive, both of which also took out cornerman Phoenix Taylor. Mark finally took the win, shocking fans by debuting a shooting star press to finish off Wilson.

Bill Yates hasn’t been seen in an Alberta ring in a long time, but showed no rust against PWA rookie Mr. Grizz. Yates seemed shocked by the ovation for Grizz, however the Edmonton fans have really gotten behind the gritty youngster with the big heart. The fans support wasn’t enough, as Grizz received a pounding from Yates, falling victim to a top rope northern lights suplex and “The Final Exam.” Afterwards, Yates proved he is an honorable contender by shaking Grizz’s hand. Before disappearing Yates was on a roll and is now likely to challenge Steele for the belt in the near future.

Speaking of long absences, former Cruiserweight Champion The Highlander was not a happy man when he returned from injury. Stripped of the belt on October 6th, Highlander took his anger out on fans by destroying their bags of candy and mooning them. The cocky JD Michaels tried to cool off the Scotsman, but succumbed to cheating when Highlander placed his feet on the ropes during a pin.

The current Cruiserweight champion Ricky Rage opted not to put his title on the line against another former champion, the wildly popular Phoenix Taylor. Taylor overwhelmed Rage with speed and agility, hitting a hurricanrana and a springboard senton dive that landed both men in the front row. Highlander made his presence known again, tripping up Taylor. Rage capitalized with a Falcon Arrow for the pin, before brawling with the man he never beat for the title. Taylor broke up the festivities and Sorochan signed all three men to a triple-threat match.

PWA really knocked this one out of the ballpark with a truly “something for everyone” type of card and continue to grow with some of the best shows in Alberta. Starting in December they will run twice a month, rotating locations between the Xtreme Zone and NAIT. Their next show is December 4, www.pwawrestling.ca for details.