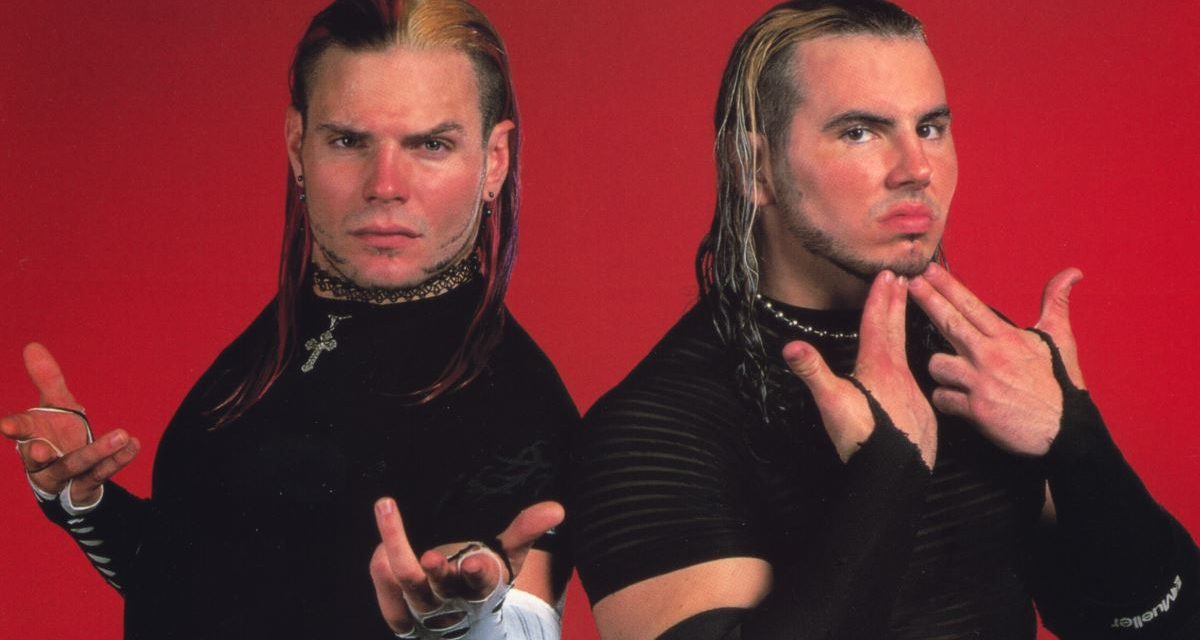 Usually when WWE features a tag team in their documentary DVDs, they focus on the sum of the two parts. 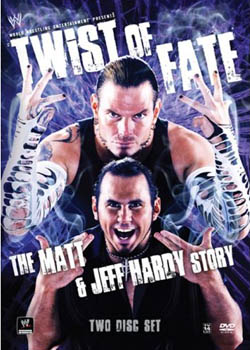 Sure, the Fed will focus on the two individuals, but at the same time the majority of the time spent on the reel is on the combined efforts of the tandem.

In the case of Twist of Fate, however, we get individual looks at Matt and Jeff Hardy, collectively known as The Hardy Boyz.

Now the reason for this split, in my estimation, is twofold. First, most obviously, the duo’s careers have taken very different roads, both of which are fairly decently covered in their respective DVDs as you’ll soon see; and second, a documentary highlighting the tandem and their rise through the ranks has already been done with Leap of Faith. Though released back in 2001, that particular recording did a fairly thorough job of documenting their tag team run and the preceding ascension through the WWE ranks.

That’s not to say that this area is covered. Both the Matt and Jeff docs get a fair bit of a look at their tag days. In particular, Matt’s takes an extended look, with commentary from their first manager, Michael “P.S.” Hayes. We also, naturally, get a look at the coming together of Team Xtreme and Lita, as well as the series of bouts with the Dudleyz and Edge and Christian (no mention of Gangrel or Terri Runnels though).

Once this area is covered in Matt’s doc, we move to the true singles push for the older brother, and the birth of V1. Here, Matt, alongside MF’er Shannon Moore, really goes into the major run of the DVD, covering off the Cruiserweight Title run and his WrestleMania 19 match against Rey Mysterio. Of course, the European and Hardcore title runs are ignored, but what else would you expect?

From there we get the really juicy part of Matt’s DVD — the Amy Dumas/Adam Copeland affair. Matt is extremely open here, as you would expect, and Edge, to his credit, talks about it as well, albeit in very limited snippets (you get the feeling this was done to save his side for his own DVD down the line). What is missing, though, is any commentary from Lita, which, while understandable to a degree, is as noticeable as Ole Anderson missing from the Four Horsemen documentary from about a year ago.

Matt’s DVD ends with his feud/partnering with MVP and discussing his hope of winning the U.S. Title, which goes to show that timing could’ve been a wee bit better for this release.

Next we move to Jeff’s DVD. First off, I have to say that WWE did a pretty decent job of not repeating too much from Matt’s DVD. We get less on the childhood and OMEGA years and more on their WWE jobber days (very politely called other things by interviewees such as Shawn Michaels). Then we get the tag team build and the first splitting, including Jeff’s cup of coffee with the Intercontinental Title. This was actually something I was pleasantly surprised to see included, since I had the feeling they would totally ignore it (because, you know whhho was the one who lost the belt to young Jeffrey).

After some more tag team footage, we go to Jeff’s first true singles run and the big match against The Undertaker, which again is lacking because UT offers no commentary (I guess dead men don’t do DVDs. Pity).

It’s at this point where things start to fall apart for Jeff. There’s discussion about rehab and Jeff feeling completely burned out and wanting to play in his motocross garden and do music. Shockingly, we get some discussion about TNA (including being mentioned by name), with Jeff talking about wanting to, then returning to WWE after his contract expired.

Unfortunately from here, the story for Jeff really ends. We don’t see anything on the first drug suspension, even though there’s footage of Jeff versus Randy Orton on the DVD. Again, had timing been better, we probably would hear some stuff about this and the most recent suspension, but as is the Jeff Hardy story is sorely incomplete.

As always with these sorts of DVDs, we get a series of highlight matches, including an early OMEGA match, a couple tag matches and a good helping of singles bouts, all of which are definite keepers for your collection.

There’s no question that Leap of Faith will be a strong seller. Though the timing could have been better for this release, you can’t argue that an updated look at Matt and Jeff was due, so enjoy this one and look forward to the next release in about five years.