“Wild” Bill Savage, an accomplished professional wrestler, died on April 12th, at the age of 77. But to call him just a wrestler is to only tell part of his story. He was also an officer in the U.S. Navy, a Deputy Sheriff, an auctioneer, and a rancher.

To say that Bill Savage led a “busy” life is to make a serious understatement. Born in Joliet, Illinois on September 28, 1930, Savage excelled in athletics in high school, eventually becoming a wrestler in the U.S. Navy. While he served his country in that capacity, he wrestled some of the very best amateurs in the country, defeating many of them. 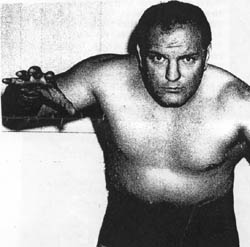 How he made the transition from Navy wrestler to professional wrestler is a bit of a mystery. His best friend Tito Carreon, himself a long-time professional wrestler, said he wasn’t sure how Savage ended up being a pro, saying, “I guess he just took an interest in it.” It was likely the challenge of elevating his athleticism to the next level and the love of performance that led to the shift, Carreon suggested.

“He was one hell of a performer,” Carreon recalled. “Absolutely one of the best in the business. Anyone that had to wrestle him knew they had to work at their very best.”

Carreon said Savage was extraordinarily tough and wrestled a very aggressive style. “You always had a good match with him,” Tito elaborated. “I was fast and did all the fancy stuff, but Bill was always right there with me. He was top quality, a real main-event caliber wrestler. I was always excited to wrestle him.”

Savage’s career in wrestling came to a close in 1968. He did not just wrestle as “Wild” Bill Savage during that time, he also donned a mask in Texas and called himself “The Cyclops.” When his career was over, he worked as a referee for Don Owen’s Pacific Northwest promotion for six more years.

In August of 1952, he married Betty Legner. During their marriage, the couple had two children, a daughter named Kathy and a son named Dan. While he wrestled, he held several other jobs, one of which was an auctioneer, a logical occupation for a performer.

“He was pretty good on the mic,” Carreon remembered. But it was his career as a Deputy Sheriff that was likely Savage’s most interesting job. He did that for 12 years but his decision to take on that post did not surprise his closest friends.

“Well, a lot of wrestlers turn to law enforcement because of all their training and stuff,” Carreon noted. “But Bill was just a good person. He was always standing up for the little guy, so I guess he was a natural policeman.”

Carreon said wrestling is actually good training for becoming a police officer — an education Savage soaked up. “You become wiser to what the world is really like out there on the road,” Carreon said. “You really get to know your public. And Bill was a man of incredibly good judgment, it’s why he was so successful in his wrestling career. He made great decisions. He met all the con artists in the business, all the people that try to trick you and he got a real education in the law. And whatever he did, that man was just good at it.”

He made an impact as Deputy Sheriff. At Savage’s funeral, Tito Carreon said a few words about his dearly departed friend. Near the end of his eulogy, Tito said the phrase, “I wrestled Bill Savage and lived to tell about it.” Savage’s fellow policemen, in attendance at the funeral, were the first to cheer upon hearing that. “It’s obvious that they loved him,” Carreon observed. “We all did.”

As his years began to come to a close, Savage suffered a stroke. He also began to feel the onset of Alzheimer’s disease, a condition that made his last year difficult. It was hard for him to remember things, and he would not always remember people who came to see him, unless they were wrestlers — he had no trouble remembering them.

“He remembered me,” Tito Carreon said, recalling a time he saw him after the stroke. “He knew we were old buddies. So I just held his hand and prayed for him.”

Two months later, Carreon visited him again, but this time Savage wasn’t faring so well. The day before he died, Carreon visited Savage one last time. “I talked to him for awhile and could see he understood but couldn’t talk. His system had shut down but the man was so tough his heart was still beating.”

Like many that knew Savage, Carreon took “Wild” Bill’s death hard. “I still have his picture on my wall,” the old-timer admitted. “He was a champion and a tremendous athlete. He loved the profession of wrestling and he was so damn good at it.” He admitted he hadn’t yet been able to take down his friend’s picture from the wall.

“I feel sad when I see it,” Carreon reflected, “but I know I’ll see him again soon.”