Hardy Boyz – Exist 2 Inspire, the memoir of the two WWE superstar brothers, does not conform to the standard WWE book, standing out almost as much as Matt and Jeff did when they first entered the world’s highest profile pro wrestling stage. 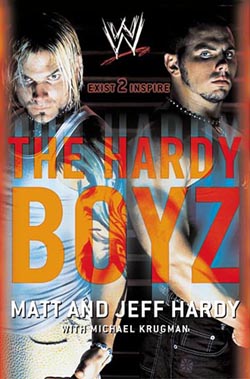 The 269-page book, now five years old, is written in transcript style, with the brothers alternating their comments about their lives and careers, resulting in the story coming across more as a shoot interview than a traditional biographical account. This alternative approach makes for easy reading as it highlights the Cameron, North Carolina duo’s childhood, backyard wrestling escapades, and their extraordinary hard work, which would lead to these two relatively small men catching on in the land of the giants, the WWE. It also transitions nicely from the highs of the Hardys turning tag team wrestling into smash up derby contests, to the lows of the heavy toll their style of wrestling took on their bodies and Jeff’s eventual burnout.

Although both risk-takers in the ring, Matt and Jeff clearly could not be much more different. Matt, the eldest, is the more ambitious of the two, having been the guiding force behind creating their own promotions, like OMEGA, and opening up a wrestling school before they were even formally trained themselves. Matt seems more the leader, the one who directs the team in what it should do next, whereas Jeff comes across as more the dreamy, artsy type who does not feel compelled to focus his efforts exclusively on wrestling. (Ironically, it is Jeff who enjoys the greater success of the two, in spite of his occasional almost lackadaisical attitude toward wrestling compared to Matt’s seeming obsession with the industry.)What also makes the book different from its contemporaries is the brothers’ criticism of some of their WWE counterparts and even the company’s storylines. Although they sometimes seem to cautiously choose their words, at other times they are quite candid about who and what irks them.

The memoir, co-written with Michael Krugman, gives readers straight-forward insight into what it can take to break into the business and also how to cope (or fail to do so) with success. This is a story of the new generation of wrestlers, a group that more often than not emphasizes spectacular looking but dangerous in-ring stunts over the art of promos and crowd psychology. As the book reveals, one of the risks in taking such a route is to encourage fans and management to expect, even demand, every future match to top the last death defying one. Well before Matt and Jeff even hit 30, they experience the crippling pain of geriatrics, occasionally struggling with something as simple as getting out of bed in the morning.

As surprisingly good as the book is (it is, after all, about two teenage heartthrobs), its 2003 publishing date makes it somewhat dated to anyone who has even superficially followed the Hardys’ careers.

For one, Matt thanks Amy Dumas (a.k.a. Lita) in the acknowledgments for “always being there for me,” a statement he would certainly retract now given the messy break-up the couple underwent when Lita hooked up with Matt’s former friend and fellow wrestler Edge. For another, the book serves as a precursor to Jeff’s eventual personal problems. It pre-dates his departure to TNA and his suspensions there, his eventual return to WWE and twice finding himself suspended for violating the company’s wellness policy, including during his push just prior to WrestleMania 24.