Some things in life we are just inexplicably drawn to. It could be anything from flowers to antique cars to aiding the homeless. These interests can be casual or border on obsession; they can be lauded or laughed at by others, depending on what they are. One of my biggest interests — one that has given me equal portions of praise and grief — is “Plowboy” Stan Frazier, best known to all of you as Uncle Elmer. 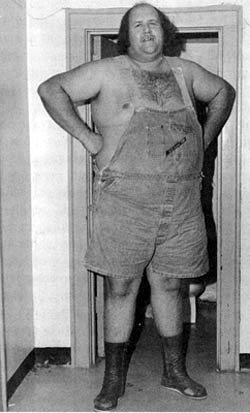 Over a decade ago, during the internet’s huge boom period, I noticed something rather sad and telling: wrestling fans had changed drastically because they were now privy to more information than ever before. Now, instead of wondering what was going to happen on next week’s show, they had access to behind-the-scenes information and a vast array of tidbits that never would have been theirs at any other point in time. It started to breed a sort of fan that thought they knew more about the wrestling industry than the people within it. It was no longer cool to like certain wrestlers, even ones that they truly liked at one point in their life, because so-and-so’s “work rate” was not up to snuff. It was a strange mentality fueled by the want to seem smarter and more informed than anybody else. To this day I still don’t get it.

Men who were huge draws all over the world — Jimmy Valiant, Ivan Putski, Ultimate Warrior and the like, who were known more for their personalities than their in-ring abilities — became the easy targets. No, they were never technical marvels, but the fact is they were remarkably popular and drew in crowds better than 90% of the more physically adapt members of their profession. To write off their contributions to professional wrestling is to show a true lack of understanding.

One of the favorite whipping boys of these “smart fans” is Stan Frazier, who died June 30, 1992, of kidney failure at age 61. Again, no virtuoso of the squared circle, he still had a certain something that got him over and made him connect with an audience. He was always a firm favorite of mine, and I know he was an important figure in the history of the business, in his own way. It bothered me to see him attacked at every corner — indeed, the punch line for many a joke — so I decided to do something about it.

I have been running PlowboyFrazier.com now for 10 years, mainly to make sure he is properly remembered. In that time, I have learned a great deal about this absolutely bizarre and intriguing man — personal tales, match results and the like — from people all over the globe. It does my heart good to see that his true fans still think of him fondly.

On the flip side, I’ve heard just about every complaint you can think of about the man, as if the constant agitation will get me to shut the site down. I have had people flat-out tell me I’m wasting my time. But this does not deter me — actually, it just strengthens my bond and makes me more determined to continue.

Let us not forget that Uncle Elmer was a semi-main event star for most of his run in the WWF, facing some of the top heels at that time, including Big John Studd, King Kong Bundy and “Rowdy” Roddy Piper. His feud with Jesse “The Body” Ventura, which stemmed from Elmer’s legitimate wedding on NBC, is still talked about today.

Before he “hit the big time,” Frazier has several runs in major promotions across the United States. He got a lot of ink and acclaim as The Convict (the first man ever managed by Fred Blassie), who challenged Bobo Brazil for the WWA World Heavyweight title. His infamous feud with Jerry Lawler in the mid-1970s did huge numbers, and was talked about in detail in Lawler’s autobiography. There were few places Frazier did not work. I have always said Plowboy Frazier was the budget version of Andre the Giant — a man like him came in handy in certain situations.

Over the years I have asked many prominent wrestling stars their thoughts on Stan Frazier. Some remember him warmly, like dear friend Jerry Jarrett and Percy Pringle, who grew up watching the “Pascagoula Plowboy” in the Gulf Coast territory. Others, like The Dynamite Kid, simply say he was worthless — implying that he just stood there and little else. After logging 30 years in the wrestling business, it’s hard to find anybody in the game of a certain age that doesn’t have a strong opinion on the man.

Many say Frazier was a con man, pure and simple, selling shoddy wares to fans and wrestlers alike, trying to put a sow’s ear over as silk. From fake Rolex watches to publicity photos, there’s nothing he wouldn’t peddle for a few bucks. For a while, he owned his own shoe store, but it wasn’t uncommon for him to show up at a wrestling event with his vehicle piled up with shoes of all sorts.

One question I am asked over and over again is “Why did he wrestle?” In today’s terms, Stan Frazier would have been a major liability due to his physical limitations, and might not have been allowed to go in the ring. The vision that many hold is him struggling to get to his feet after being dropped down to the mat (look at Wrestlemania II if you need a refresher). I can’t deny the obvious: he was an old, overweight man burdened by injuries and severe health trouble when he became Uncle Elmer alongside Hillbilly Jim, Cousin Junior and Cousin Luke.

So how did a guy like Stan Frazier, a most unlikely wrestling star, get in with the WWF amidst their expansion period? Primarily, it was his size. Not many people could just walk into an arena and inspire instant awe. Frazier was 6’10”, 460 pounds (and up!), all balanced on a remarkably dinky size 12 shoe. At a time when the WWF cornered the market in monsters, it was natural for him to be there. 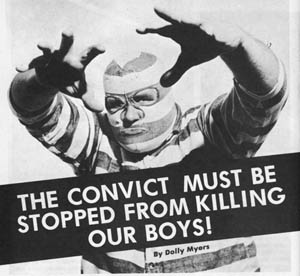 His personality was another major selling point. He was fortunate enough to have existed in a time when you developed your gimmick until it suited your own style. Stan could be warm and bubbly or downright terrifying. The funniest thing about Frazier is he would take any gimmick or situation and play it with total conviction, even if it bordered on absurd. He could go from the injured bull who was ready to tear apart the Fabulous Freebirds to the easy-going rube who taught you how to properly slice and eat a watermelon. Not an easy thing to do, folks!

Somehow he could take the strangest things and pull them all together, much like Mick Foley did in later years. Every time I saw Dude Love or Mankind, I always felt the spirit of Frazier was somehow hovering above. The same holds true for the Blue World Order, who definitely smacked of Kamala II (Frazier in a loincloth!) and the Giant Rebel (a Confederate complete with sword for charging into battle).

Uncle Elmer was really no different than his old Plowboy Frazier persona that he had used for 25 years. Oh, he may have “hicked it up” a bit, since this was the cartoon era — with the dancing, buckets of pigs parts and whatnot — but what you saw out there was basically his standard shtick. And his ring work varied nil from what he had done for most of his career: punches, body slams and leg drops. Sure, he could wrestle if he needed to, but he didn’t need to … and he didn’t want to, either.

It always confuses me when people say he represented the very worst of professional wrestling (those people obviously haven’t been watching that long!). The thing is that everybody who watched the WWF in the mid-1980s remembers Uncle Elmer. Some wrestlers spent more time in the business than he did, and they have been forgotten with the passage of time. Once you saw Stan Frazier, in any of his countless guises, you were likely to never forget him. Perhaps this was his greatest achievement in wrestling. 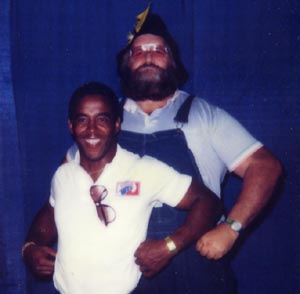 I befriended his late wife, Joyce, several years back — the same woman he married on Saturday Night’s Main Event. She was a marvelous woman whom I learned so much from. Joyce was on the road with Stan during his Uncle Elmer days. Everything she described seemed much like a life in the circus — a better comparison one could not fathom. I feel so fortunate to have been a part of her life, and she told me that having her late husband memorialized really meant a lot to her.

I enjoy Stan Frazier’s work because he reminds me of a time when people just didn’t take things so seriously — when I could turn on wrestling and just have a good time. To me, wrestling is a mixture of various elements — you have the athletic, the dramatic, the comedic and so forth. Balanced properly, you have an entertaining package that appeals to a wide group of people. Comedy and old-fashioned hokum, used sparingly, adds to the overall entertainment value of a wrestling show.

He wasn’t pretty, he wasn’t technically proficient, but he sure was fun. I guess if you have to be obsessed by a professional wrestler, Stan Frazier isn’t too bad of a choice … as long as you know that everybody will tease you for it until the end of time. For him, I’m more than willing to take the abuse.