Full Impact Pro hasn’t been around long, but with their 2007 DVD release of their one-year anniversary show, BYOB: Big Year One Bash – The Hangover, from 2005, the sister promotion to Ring of Honor shows it is decent, but still in its infancy. 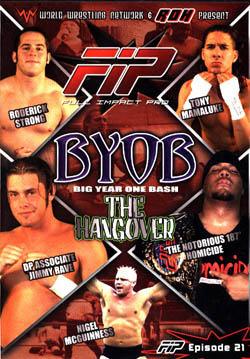 This show, the day after the one-year anniversary show, hence the hangover moniker, takes place in a high school gym near Tampa in Bushnell, Fla., and features some well-known names such as Jay Lethal, Homicide, Nigel McGuinness, Roderick Strong, Antonio (now MVP) Banks, Tony Mamaluke and Jimmy Rave. Though it’s a small venue, the action doesn’t suffer and the crowd stays enthralled all show long.

Great back-and-forth action and Lethal and Rance match each other move for move. Lethal, the heel here, gets the win after a Dragon Suplex.

The Heartbreak Express (Sean and Phil Davis) come out next and apparently won the FIP tag titles the night before. Sal Rinauro interrupts and wants a shot at the belts with his partner, Seth Delay. The Express set up a No. 1 contenders gauntlet match that starts right now.

Steele and James dominate, but Rinauro and Delay steal one when Rinauro dropkicks his partner into Steele and gets the quick three.

Madison and Stevens are solid and beat down Clark and Fury for much of the match. During a Pier 6, Clark hits an enziguiri on Stevens and Fury cradles him from behind for the upset.

Just seconds into the match, the Express distract the ref and Stevens and Madison run in and his stereo piledrivers on Clark and Fury. Ref turns around, blah, blah, blah.

Clark and Fury challenge Stevens and Madison after the match.

Azrieal is out next and issues an open challenge to a member of the DP (Dave Prazak) Associates. Mr. Milo Beasley wheels himself out in a wheelchair, but is declined by Prazak, who brings out his hired gun for the evening in McGuinness, who bashes Florida and the United States. Prazak then pushes Beasley off the stage in his wheelchair in a bizarre move.

Azrieal gets little offense in until the end when he hits McGuinness with a double kick to the back of the head from the top rope for a clean three.

Rainman is next to the stage and challenges Banks, who obliges and the match starts on the floor.

Match #7 – No DQ, Anything Goes – Rainman vs. Antonio Banks

The former tag partners battle all over the gym. Banks cracks Rainman with an empty pop can and then pours hot coffee in his eyes. E-C-…nevermind. Rainman attempts to suffocate Banks with a plastic bag, but wins after two heavy chair shots to Banks’ dome.

Kahagas looks like The Great Muta, circa 1989. He wins easily with a version of a (insert name) Driver.

The titles stay with the Express after a double back suplex to Starsmore.

Rinauro and Delay hit the ring after the match and Sean and Phil bolt.

These guys can go, especially Strong. Lots of mat action, too.

Fall 1: Strong with a jacknife into a rollup

You can also catch these guys on TNA nowadays and they have a four-star match here. Homicide was the long-reigning FIP champ at the time and the first time a DP Associates member (Rave) had a title shot. Near-falls at the end make this match even more entertaining. Homicide wins with an old-fashioned lariat.

The champ is being interviewed in the ring and gets Pearl Harbored by Prazak, Beasley (who says it’s a miracle that he can walk again) and Rainman, who challenges Homicide to a title match after laying him out with a sit-out powerbomb that Batista has nothing on. Rainman heads to the back and on the way, threatens to slap a little kid. Nice way to end the show. Really.

FIP might not be a company that’s well known, but take one look at this show and it’s a guarantee you’ll be hooked. The announcers seem very knowledgeable and there isn’t any dead air. They call the matches move for move and don’t get sidetracked. A lack of women wrestlers doesn’t hinder the show either.

Trailers for other Big Vision Entertainment DVDs are thrown in as extras.

Any ROH or TNA fan should check out BYOB, if they haven’t already (this is a new release of a DVD that has been out under the Ring of Honor banner for a while). It’s a big show in front of a small crowd, but each wrestler competes as if they were wrestling at Madison Square Garden.