To hear Jim Ross talk about the art of smoking meat just right is to have one’s mouth water. Just as he is an expert on describing what’s going on in a wrestling ring, he’s damn good at explaining what makes his barbecue joint so special. 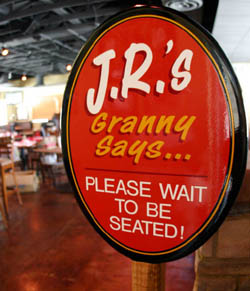 “Smoking is kind of a lost art in the restaurant world, ostensibly because it’s so darn time consuming,” he explained to SLAM! Wrestling recently. At his restaurant, J.R.’s Family Bar-B-Q, located on 353 Interstate Drive in Norman, Oklahoma in a refitted Krispy Kreme Doughnuts shop, a few employees arrive at 4 a.m. to get the outdoor smoker started each morning. The pulled pork, for example, made from pork shoulder or pork butt, is a 12-hour process.

Thanks to his travels as a wrestling announcer, particularly as the play-by-play man for WWE Monday Night Raw, Ross has been able to hit barbecue restaurants big and small the world over. The one thing he brought home with him is the challenges of not running out of the prime attractions.

“One of the worst things in the world is you go to a barbecue place and they say, ‘Well, we’re out of ribs.’ That’s a cardinal sin,” he said. Yet he also acknowledges that running out is generally proof that the restaurant serves good ribs!

Open since July 2007, J.R.’s Family Bar-B-Q hasn’t run out of ribs too often, Ross said, but the rotisserie chickens are another matter. It’s a popular item for take-out, with families buying whole chickens to take home.

Ross is partnered with Hal Smith of the Hal Smith Restaurant Group for the venture. Smith is a veteran of the food game, having been involved in the past with chains like Chili’s Grill & Bar and Chi-Chi’s. Today, the Hal Smith Restaurant Group runs 40 restaurants in seven U.S. states, with there being 10 different “concepts” or restaurant types/chains. A second J.R.’s Family Bar-B-Q location is close to opening in Moore, Oklahoma.

From the get-go, J.R.’s Family Bar-B-Q has overachieved, making money from its first month — a rarity in such a competitive business. “I really didn’t know what to expect,” admitted Ross. “We had a budget, we had numbers that we needed to make to keep afloat, just like anyone else’s business, just like anyone’s household.”

He has learned a lot since the opening. “At the double-nickel (age 55), I started another venture. I got in that game a little bit late, perhaps, but it’s never too late.”

When he is off the road, Ross tries to drop in at the restaurant on a regular basis. He doesn’t have any set chores, other than mingling with the customers, and perhaps talking about some of his memorabilia on the walls. (A cartoon by SLAM! Wrestling’s own Annette Balesteri is on the wall as well.)

A little off the beaten path in Norman, J.R.’s Family Bar-B-Q still has a lot of name recognition with wrestling fans, primarily through the popular blog run by Ross at www.jrsbarbq.com.

Ross admitted that he has received a little guff for tying in sales so much with the blog — but it is a business for him, perhaps one that will keep him and his family involved for years to come.

He has always been upfront that the website is to sell things. “I want to sell product. I want to ship beef jerky to Canada. I want to sell people our barbecue sauce. We want to sell caps, shirts, cookbooks, or whatever,” Ross said. “That’s the reason that site is there, to create revenue.”

But that doesn’t mean he doesn’t enjoy working on the blogs. Traffic has been growing because of the regular additions to the site and he gets tons of emails, which he tries to answer through the blog.

“It’s really growing. I’m really having fun with the blogs,” he said. “We work hard at it, and we’ve stayed diligent with it. I think it’s just indicative that my passion for the product, and interacting with fans, is still healthy.”