In May of 2005, Ring of Honor debuted at the New Yorker Hotel in Manhattan with what at the time was undoubtedly the best bell-to-bell show they have ever produced. Eleven New York City shows later, Ring of Honor finally dubbed a card worthy of the name Manhattan Mayhem II. 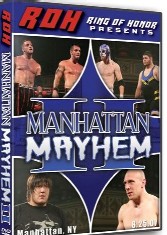 Having moved to the Manhattan Centre (where Monday Night Raw was first held) and on their fifth consecutive sell-out of the building, Manhattan Mayhem II truly is a stacked card. You can tell right off the bat that the show will be something with the lightning fast tag opener with Matt Cross and Erik Stevens taking on Jigsaw and Mike Quackenbush.

Having let my ROH viewing lapse (and hanging my head in shame) since the spring, it is pretty cool to see some new faces getting a chance to shine. It feels strange to not see guys like Samoa Joe, Christopher Daniels and Homicide on the DVDs, but it’s to ROH’s credit that they continue to put on such stellar shows. Guys like the four in the tag match as well as many others on the roster truly have taken the ball and run with it.

The show also features the return of Jimmy Jacobs after major knee surgery, facing Mitch Franklin in one of the few matches where the outcome is evident before it even starts.

Another remarkable thing about ROH is their ability to maintain feuds for months and still keep them fresh. Roderick Strong turned on Austin Aries in February and I saw Roderick Strong wrestle Austin Aries and Jack Evans in separate matches in Detroit in April. This show took place on August 25th and features a three-way match between Aries, Evans and Strong that is every bit as entertaining as it would have been six months earlier. Another set of former tag team partners, Chris Hero and Claudio Castignoli, face off in an entertaining bout on the show. In a business that hotshots angles and feuds and quickly moves on to the next one it really is a credit to ROH booker Gabe Sapolsky that he makes this work so effectively.

Another feud that ran during August was the tag team title war between Jay and Mark Briscoe and Montreal’s El Generico and Kevin Steen. The two teams faced off over the summer months in street fights, single matches, cage matches, and, in this case, a two-out-of-three falls match. The tag team title bouts have often been the main events of recent ROH shows, showing that Sapolsky loves tag team wrestling and has faith in his teams. While I probably would have put the World Title match in the main event of this particular show, the tag match is fantastic. Generico and Steen have grown leaps and bounds in the past few years while the Briscoes continue to be the best tag team in North America. Tag team wrestling is not dead folks, and this match is just one of the things that proves it.

I do however think that World Champion Takeshi Morishima versus Bryan Danielson should have been on last. The classic David versus Goliath story is absolutely stunning to watch. Danielson constantly tries to take down the much larger champion, who beats the hell out of Danielson including focusing on his face and crushing his orbital socket. The match was voted match of the year by ROH fans on the website, and it completely deserves it. It is a masterpiece.

While as an overall show, Manhattan Mayhem II is not as good at the original — sequels rarely are. The show does deserve the name as a lot of it is fantastic. I can’t wait to see what they have in store when the time comes around for Manhattan Mayhem III.