Maria loving every minute of it

Sit down with Maria Kanellis, and you’ll quickly learn two things: one, that the WWE Diva is even more beautiful and charming and adorable and intelligent than she comes across on TV; two, that she loves absolutely everything about her job, and chiefly, the chance to interact with her fans. Who better, then, to attend last weekend’s Fan Axxess event held north of Toronto as part of the WWE’s Road to Wrestlemania tour? 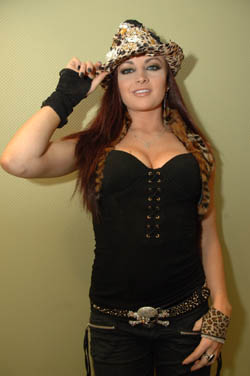 Playing goodwill ambassador at events like Fan Axxess at Vaughan Mills shopping centre in Vaughan is just one of the many hats Maria wears, along with those of wrestler, valet/manager, and backstage interviewer.

“I can’t say I like any of those (roles) more than any other,” she said enthusiastically. “There are times I’m out there and Santino is just cracking me up. Or when I’m in a match — if I actually win — I get to celebrate. Or backstage when I’m interviewing John Cena — he’s so amazing. (All of the roles I play) are so much fun. How could I pick just one?”

Fortunately for her many fans, she doesn’t have to make that choice. Indeed, she is all over RAW, appearing in several segments on a weekly basis. Recently even her Pay-Per-View time has increased substantially. At the Royal Rumble, for example, Maria was prominently featured in a segment designed to promote her upcoming appearance in Playboy.

“My what?” she asked coyly, preferring to let that story play out on TV rather than divulge details of her recent photo shoot for the magazine. “I’ve got to get approval from my boyfriend of course, to make sure he’s going to be okay with it. It’s something that’s been floating around for a while. I first turned it down, but we’ll see what happens. Maybe I’ll have to turn it down again.”

In the storyline, Santino Marella is dead set against Maria posing for the magazine. The angle is expected to play out over the next few weeks, with the issue finally released close to Wrestlemania. Maria is proud to join fellow Divas Ashley Massaro, Torrie Wilson, and Candice Michelle as WWE stars-turned-Playmates. It’s something she had been contemplating for some time, but had turned down in the past, as she felt it would potentially cause discomfort for her younger sister who was in high school at the time. Now, however, she jumped at the chance.

“My sister said ‘Go for it, it’s an amazing opportunity’. My mom’s behind me, my brothers too. It’s definitely a decision that you need your family for.”

Family is a major influence in Maria’s life, and when speaking about them, she absolutely beams. It’s the same as when she talks about some of the other opportunities she’s had in WWE, such as her trips overseas for the annual Tribute to the Troops show, in support of the U.S. Armed Forces.

Besides believing wholeheartedly in the concept of those shows — “even if you don’t believe in the war, (the men and women overseas) are giving their lives for a bigger cause)” — Maria also has her own personal reason to make the trip every year. “My brother,” she explained, “is in the national guard. He has been over in Iraq and served there. So for me, it’s a way for me and my brother to get a lot closer. Because I experience some of what he experienced over there — a very, very small portion of it, but some of it.” 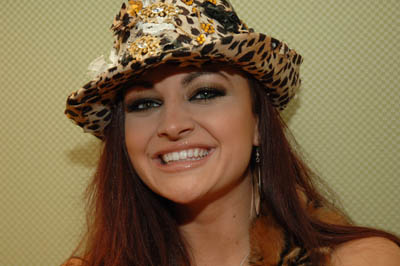 It’s the potential for experiences like those that originally prompted Maria to sign up for the Diva Search back in 2004. Unlike some of the women who have seemingly entered the contest without a full understanding of what the life of a WWE Diva would entail, Maria went in with both of her beautiful eyes wide open.

“I wanted everything and more when I signed up for the Diva Search. I just didn’t know how involved I could be. These girls there have been wrestling for five years, ten years; so getting in the ring, I was like, ‘Can I do it?’ I wanted to do it — that was one of the things I said when I came in was that I wanted to get in the ring. I think it’s great. I get to work with a lot more people because of it. I get to work with the guys as well as the females. It’s awesome.”

As good as that may be, Maria isn’t done quite yet. She has some other definite goals that she is striving to accomplish.

“I would love to be making a WWE film within the next year, that’s a huge goal. I wouldn’t want to do a movie for anyone else — I love the WWE — but if the WWE gives me the opportunity, I’d do it. Another goal is becoming the Women’s Champion, even if it’s for only one day. To be on that prestigious list would be amazing. I’ve got so many goals, but those two are so important to me right now.”

Also important to Maria are her fans, many of whom came out to the Fan Axxess event specifically for her autograph session. Speaking about them, Maria gushes with appreciation, and admits she’s often overwhelmed by their support.

“I’m sometimes taken aback because you don’t realize how big of an impact we can make. To be able to be something that little girls can aspire to be. They don’t have to be ‘Oh, I broke a nail,” but they can actually be really tough too. It’s an amazing feeling knowing how they feel about us. WWE fans really are the most loyal fans in the entire world. I love them.”

Bob Kapur has come to the sad realization that he doesn’t stand a chance with Maria. So he’s still single, ladies, just in time for Valentine’s Day. E-mail him at [email protected].