As Karen Angle discussed a number of personal topics during a TNA-Spike TV media conference call, one could almost hear a certain earnestness in her voice when she discussed her husband and family.

As most everyone knows, her husband Kurt Angle is the current TNA World Champion and is scheduled to defend the crown against Christian Cage this Sunday in Greenville, South Carolina, at the Against All Odds pay-per-view. 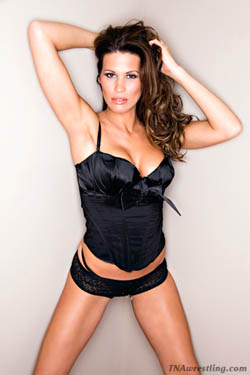 Karen has raised eyebrows with her seductive onscreen performance as a TNA Knockout, performing alongside her husband. Karen originally proposed her daughter working with Kurt, with head writer Vince Russo and Jeff Jarrett modifying the idea to use Karen herself.

What is not so well known is the story behind Karen Angle. Fielding questions from the professional wrestling media, she revealed a rare glimpse into her world.

Asked by SLAM! Wrestling to name some people she has learned the most from, Angle quickly answered Miss Elizabeth and Sherri Martel. “I think every girl who has grown up watching wrestling wanted to be an Elizabeth,” she began. “I think she was incredible at what she did. On the other end of it, you have Sherri Martel, who was one of the best valets of wrestling. With Sherri, it was the expressions and reactions. With Elizabeth, it was in the way she carried herself.”

Angle did some local modeling before meeting and dating her future husband. While Kurt competed and trained for the 1996 Olympics, Karen helped support him over an approximate 11-year period by working two jobs at times to make sure the bills were paid. “At that time, I was actually working in sales and also owned a nail salon and part of the reason why I didn’t move with Kurt when he signed with the WWE is we actually had custody of his great niece, who lived with us for a few years. So even before I had children, I had a child, so that was my responsibility at the time,” she explained.

Joining World Wrestling Entertainment was a great experience that soon wore thin due mainly to the extensive traveling schedule which saw Kurt on the road for extended periods of time constantly.

“Sometimes he’d be home maybe four days a month (from WWE). It was very very difficult. We went through some really difficult times and you know what we say now? Now, exactly since with me signing with TNA and with him being with them? We’re like newlyweds, we’re finally newlyweds. Because we got married and after we got married, Kurt left two days after that, and we never really had that time with each other so it’s been wonderful.”

It was those difficult times that led them to TNA, where a more flexible schedule led to a rejuvenated family and career. Karen went into some detail on both points, praising TNA’s willingness to be accommodating.

“I’m sure everybody realizes the situation Kurt was in and being on the road over 300 days a year. As I told [TNA President] Dixie Carter and everyone else, Dixie was an angel that was sent to my family. TNA has given Kurt his life back. He’s healthier than he’s ever been,” she said.

“Dixie is an amazing amazing businesswoman, person, mother; she sets an amazing example for women out there. And it has also given me the opportunity that I could be home with my kids, I can also have a job, have my own career, where I can have my kids with me; Jeff Jarrett on the other hand is … also an amazing person who has done something that in all of the years of other wrestling companies being in the business.”

“You know, he walked away from something and didn’t go crying back. He had bigger whatever you want to call them, than pretty much everyone else in the business. He created something that these other men and women you know, they have some other place that they can go, where they can pursue other opportunities, and they can have a life and they can be happy, and the atmosphere there is just awesome.”

Karen addressed rumours of a more active WWE role but reiterated her earlier contentions on their road schedule and the effect it was having on Kurt.

“It had been mentioned a few times over the years, about me being involved (in WWE storylines). In the beginning, when Kurt signed with that company, I was star struck like everybody else. You know, he’s there with ‘Stone Cold’ Steve Austin, The Rock. But when you truly love someone, you truly care about them, that’s not an atmosphere you want them to live. I mean, obviously, they’re obviously a great moneymaking company, but when you see someone on the road like that and beating themselves up, and coming home incredibly exhausted, I just wasn’t a fan of that atmosphere.”

Angle chose her words carefully when asked if she thought the working atmosphere of the WWE influences the wrestlers to take excessive doses of prescription pills.

“You know, I would just really rather not comment on that, all I can say where Kurt is now, he is happy and he is healthy,” she said.

“Being on the road that many days was of no interest to us whatsoever at all. When I went to TNA, you know it was supposed to be a short little thing, which turned into something else, which has been incredible for me, incredible for Kurt and for our family.”

Physically, she confirmed a full recovery from her foot injury, sustained when she caught her heel on the mat hopping out of the ring at a December Impact TV taping. She also declined to comment extensively on the Chris Benoit situation. “You know what; I just think it was just a sad thing that happened, and that’s really all I can say about that.”

Karen all but certified a clean bill of health regarding her husband’s documented neck injuries. “He has not has been healthier then is right now in 11 years. I can see him doing this for another 10-15 years. This what he loves, he has a passion for it and he’s great at it. I think he’s proven that over and over and over again.”

Finally, when asked if Kurt could defeat Brock Lesnar in a mixed martial arts contest, her response was clear.

“Kurt could kick Brock’s ass, kick his ass. I’m sure everyone has read on the internet and heard where Kurt and Brock went at it in the ring in front of all the wrestlers a few years ago. And there’s always two sides to every story but if you would ask any of the wrestlers that were in the company at that time and they’re still there now, they can tell you that Kurt went in there with flip-flops on, and over and over and over again continued to kick Brock’s ass.”

Say it loud and proud; life is certainly a family affair for Karen Angle.