WINNIPEG — Tony Condello is set to take another cross-Canada mix of wrestlers into the frigid wilds of northern Manitoba for his annual tour of aboriginal communities.

“This tour is not just a tour; it is an exercise in mind and body,” the Winnipeg-based promoter told SLAM! Wrestling.

This year, he will be taking three 4×4 vans and expects the first show to take place February 18. Condello, who has been making the winter Northern Trek tour (dubbed by Don Callis as “Death Tours”) for over 20 years, said anybody who can withstand the rigours of this three-week expedition can handle anything thrown their way. 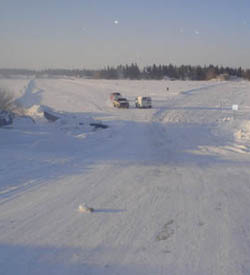 Vance Nevada, a 15-year mat veteran, will be making his fourth northern trip and can attest to Condello’s claims.

“This tour is a very rough trip. After the second year, I specifically sought out other bookings so that I would have an excuse not to go, but still stay on Condello’s call list for dates in towns that featured more of the comforts of home,” said Nevada. “It turned out to be a rib on myself, as my alternate tour was for the Calgary-based Can-Am promotion and included three weeks in the Northwest Territories in even worse conditions.”

Condello only makes the trips in February for that marks the time of year when the roads are at their best for travel. During the first five hours of day one, wrestlers ride in relative comfort on paved highways. But from there, the vehicles enter a world of frozen lakes and wooded wilderness. The adventure takes about three weeks from start to finish — “if you make it back that is,” Condello said with a laugh, “or you are going to swim with the fishes.” Driving on ice roads is unquestionably a harrowing, unforgettable ordeal.

Nevada cautioned about driving slowly and listening for the sound of cracking ice. There is “good cracking,” which suggests the ice is breathing as it should, but also “bad cracking,” which he said “signals trouble.” 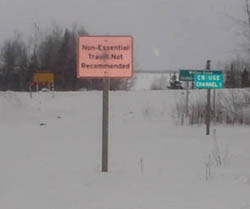 “Watch for the distinct colours of the ice road. The whiter the road, the thicker the ice; if you see a dark spot, manoeuvre around it. Manoeuvring, that can be a bit tricky on the ice,” said Nevada. “Last year, I think one truck or another ended up lodged in a snow bank at least five different times. On the winter roads, you might wait up until 12 hours for another vehicle to come along to help, or to allow for the rest of the crew to go to the next town and find help. One time last year, the ring truck failed to recognize a narrow shoulder and the van was bogged down in a bank which snapped two tow ropes and required a semi-truck to come along and drag us out. And even that was a struggle.”

Nevada noted that if an ice road has not yet been finished, what would have been a one-hour trip could wind up turning into a 23-hour marathon detour.

“In this case, you might wrestle your match, tear down the ring and immediately drive to the next town just in time to set up and wrestle the very next night.”

That next town’s show, though, might be cancelled if there has been a suicide in the community, in which case the band council closes down the town.

Sleeping arrangements are another challenge for the crew, as the town usually only provides one common room or a home economics room in a school. In either case, that space becomes a combined bedroom, kitchen and locker room.

“Looking into one of these rooms, particularly mid-tour, resembles a refugee camp. You’ll have sleeping bags configured throughout the space, with sweaty gear and towels hanging off chairs, guys have all of their belongings stacked up around their space like a little fort,” Nevada said.

He added that if they are lucky, gym mats are available to sleep on. But that is not always the case and Nevada once made a bed out of three ironing boards to keep himself from sleeping on a tile floor. To add to the sleeping difficulties, if even one person snores, he or she likely will be the only one on the crew to get a decent night’s rest. 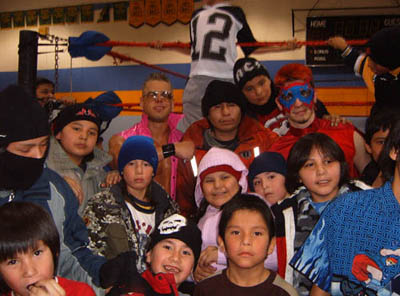 The fans welcome the wrestlers with open arms

The wrestlers will also be lucky to receive adequate nourishment. Although the aboriginal people are typically very accommodating, such as sharing the fish they had caught and prepared, most of the towns only have one store and few have restaurants. And given the expense of transporting foodstuffs to these faraway posts, stores typically charge $6 for two litres of pop and $13 for a gallon of milk, according to Condello.

“Long drives, little or poor sleep, malnourishment, plus the rigours of wrestling nightly in the cold climate — which doesn’t let your muscles warm up to peak performance — can really wear you down quickly,” Nevada pointed out.

He added that wrestlers finding themselves out of the weight room, away from their routines, and constantly in close conditions often have a hard time adapting.

“Even if you get along with everyone, you do reach a point where you’d like to just go off and do your own thing and there is seldom an opportunity for that. If the crew doesn’t become your family or at least the part of your family that you enjoy spending time with, it can be an incredibly lonely and isolating tour.”

Nevada, however, felt that one of the bonuses of the trip is the absence of typical backstage wrestling politics: “It’s just a crew of talent that has a genuine love of the wrestling business and a desire to challenge themselves.”

All the same, is it all worth it? Nevada, for one, thinks so.

“(Initially,) I had wanted to do the tour because it is such an important piece of Canadian wrestling lore. Tour alumni reads like a who’s who of the business: Edge, Chris Jericho, Lance Storm, Rhino, Christian Cage, Joe E. Legend, Don Callis, Johnny Swinger, Baron Von Raschke, Kerry Brown, Chi Chi Cruz, Leatherface, Eddie Watts, Wavell Starr. I think that a lot of the talent that is chomping at the bit to get on this tour now look at it the same way,” said Nevada. 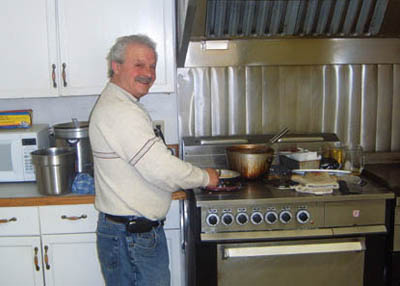 Tony Condello does much more than just organize the trip!

Condello said the Internet has made his tour famous, if not infamous, as he fields many requests to join him.

“Everybody seems interested to go at least once with me,” he said. “For this type of tour, I even get calls from Japan. They can’t believe I drive over frozen water.”

Nevada added that these days, he makes the trip just to hang out with and listen to Condello tell his stories: “He is priceless. I would say that his place in the history of the business has always been understated.”

This is the only wrestling tour Condello still operates as he is busy the rest of the year putting on four mixed martial arts events a year in Winnipeg, which are taped for The Fight Network. But he still enjoys talking about past trips to the north, especially when he describes the laughs he has had at the expense of first-timers.

“They believe something will happen, that they might drown. So sometimes I rib them saying, ‘Look at that crack in the ice — you better say your prayers.'”

The effect of those ribs have even felled macho strongmen like former arm wrestling champion and WCW super heavyweight Scott Norton, who believing he was about to drown, cried in the van while saying his goodbyes to his family, Condello said. Norton is still telling people about the experience as Condello feared admitting he was just joking.

“I didn’t want my back broken,” Condello said. 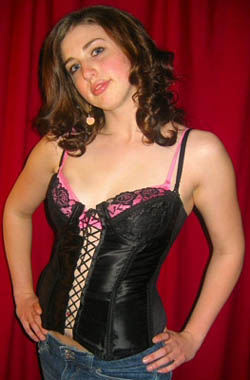 One newcomer to this year’s tour is the East Coast’s Krysta Lynn Scott, who is just coming off the success of Wrestling Reality.

“Really, right now I’m not sure what to think. I’ve read the books, heard the horror stories, but still immediately said yes when it was offered. There was never a doubt in my mind,” she said, adding joining the “Death Tour” had been a goal of hers. “My hope is just to learn. With so much time on the road and in the company of some great names like Condello and Vance, I just hope to soak up as much information as I can. The kind of stuff you learn on tour sticks with you and really changes the wrestler that you become. I’m really excited to see what happens.”

Luckily for Scott, she has been smartened up as to how to prepare for the excursion.

“Vance Nevada was nice enough to send me information about the conditions. Basically I get three bags, one for food, one for gear/clothes and the last for sleeping stuff. Honestly when I was reading the information I couldn’t help but laugh at what exactly I was getting myself into,” she said. “I just hadn’t even thought about there being no hotel rooms, but that would never change my mind. I’m only looking at it more of a challenge for myself. I think Vance put it something like, ‘We sleep on the side of the road in a truck, or at the venue when we’re lucky, but there aren’t always enough gym mats to go around.’ I’m excited to have another opportunity to prove to fans, wrestlers, family, and friends exactly what I am made of. And also just how far I will go to make it in this business.”

“They’re very talented people, number one, the ladies and all the guys,” Condello said.