Wednesday night, the CBC’s The Fifth Estate talked about the death of former World Heavyweight Champion Chris Benoit and his family in their suburban Atlanta home in June. Nearly seven months after the fact, the debate still rages on about why Benoit would do such a thing. The program tried to add some depth into what happened.

We open the show with the history of Stampede Wrestling and its laundry list of stars including Andre the Giant, the Hart Family and Chris Benoit.

In the past 15 years, a dozen former Stampede wrestlers are dead at the average age of 41.

They touch on Benoit’s upbringing in the sport and how he idolized the Dynamite Kid — even resembling him. Bret Hart compares Kid to Wayne Gretzky.

Mike Benoit, Chris’s father, recalls the first time they went to see Stampede Wrestling and how that show drove Chris to lift weights and by age 18, he was bench pressing 400 pounds.

Benoit went on to emulate Dynamite Kid’s style, “following in his footsteps” is how Mike Benoit puts it.

They detail Dynamite Kid’s drug problems and how he self-medicated to ease the pain.

Jake Roberts recalls how he had trouble sleeping many nights trying to think of ways to be better. To go to sleep, he says, he self-medicated. 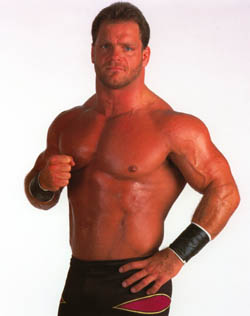 We dive into how World Wrestling Entertainment drove many regional promoters out of business. Roberts cites that it used to take 10-15 years to establish yourself nationwide but Vince McMahon could do it in three weeks.

The report goes on to detail the increase in violence in wrestling in the most-recent era and how steroids became an unofficial official policy.

From there, it’s back to Benoit, tracking him to Japan and eventually to WWE where he won the World Heavyweight Championship in 2004.

Mike Benoit recalled a conversation he had with Chris, asking him why he was taking drugs once he was established. Chris replied, “Dad, if I want to have a job, I have to.” With Chris’s marriage falling apart, Mike says Nancy shared some of the behavior problems with him and that there was an alcohol problem in the house.

Mike recalls that, around 2005, Chris became extremely paranoid, telling his driver to take different routes to avoid having people follow him home, having his son Daniel in a lockdown school because he was afraid of kidnappers and having a gated house with two trained German Shepherds to protect the house.

This all leads to the death of Eddie Guerrero, Chris’s best friend. From there, Chris starting quoting scriptures, which Mike says was unlike him, and wrote to Eddie in a diary shortly after his death. While it was dark while writing to Eddie, he wrote glowingly about his wife and son. Fast forward a year and a half and on June 25, 2007, police discovered Chris, Nancy and Daniel all dead in their suburban Atlanta home.

Roberts says he still cannot believe that the man he knew did those things. He says, if he goes to Heaven or Hell and God or the Devil said that Benoit did those things, he’d reply, “screw you, you’re a liar.”

They replay some of Vince McMahon’s message from the ECW after the incident and how WWE quickly started to distance themselves from Benoit, removing his likeness from their website.

They bring in Chris Nowinski and how he asked Mike Benoit for Chris’ brain. They detail his troubles with concussions that led him to West Virginia University and how the doctors there are searching deceased athletes’ brains for answers because of concussions.

Benoit’s brain looked like that of a person suffering from a specific type of dementia in their 80s-90s. This was consistent with other findings. The doctors believe that the damage in Benoit is so extensive that they believe he cannot be held responsible for the deaths of Nancy and Daniel.

They say his brain was so disconnected that he could not deal with life’s stresses. Vince, in a CNN interview, says that cannot be true as he wouldn’t be able to function as a normal human being if that report were accurate. The Fifth Estate requested to talk to McMahon for this piece but its request was denied.

They talk about how the lives of Bret Hart, Dynamite Kid and Chris Nowinski are not normal anymore due to wrestling. Hart suffered a stroke due to several concussions. Dynamite Kid is confined to a wheelchair and Nowinski is still suffering from the effects of his concussions.

All in all, it was 50 minutes of pretty even commentary, in my mind. It would’ve been nice to have Vince McMahon giving his side of things since he pretty much is the mecca of wrestling right now, but, understandably, WWE probably wants to keep this whole thing behind them best they can. Many different sources were found for this piece, including Bret Hart and Mike Benoit. Benoit’s commentary is useful for obvious reasons. Citing the study of the brain and Nowinski’s involvement is especially interesting and gives new facts to such a dark situation.