Just a few short months after Sportkings LP announced and delivered the inclusion of Hulk Hogan in their first multi-sport set, Donruss/Playoff Inc. has stepped between the ropes as the latest company to pay tribute to wrestling’s biggest names.

The Texas-based company recently issued its first Americana set, which honours the greats in U.S. sports and entertainment and included three current and former wrestlers on its checklist — The Ultimate Warrior, Stacy Keibler and Gail Kim.

Kiebler’s involvement in the project has been known for quite some time. When the set was first announced at the 2007 National Sports Collectors Convention, Keibler was on-hand to sign copies of the promotional version of her card. Warrior and Kim, however, were surprise additions to the star-studded roster, which includes such notable names as Mickey Rooney, Willie Mays and Humphrey Bogart.

Though Kim and Kiebler has appeared in numerous trading card sets produced by Fleer (when they had a WWE contract), which gave fans the opportunity to collect their autographs and event-used memorabilia, Warrior’s inclusion gives fans the first opportunity to acquire pack-issued certified autographs on trading cards. This, as Scott Prusha, spokesman for Donruss/Playoff comments, was one of the reasons why D/P wanted to sign the former WWF Heavyweight Champion to a contract. 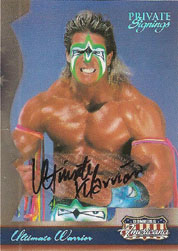 The Ultimate Warrior has signed on for Donruss Americana, a new trading card set.

“We actually picked the Warrior because he has never had a certified autograph,” Prusha said. “At the last show he did, Hogan was there and the Warrior’s line was twice as long. He’s incredibly popular and we thought he would be a great edition to the program.”

The three wrestler selections for the initial run of Americana are joined by other celebrities who have ties to the mat wars, including William Shatner, who appeared on Monday Night Raw in the mid-1990s and Burt Ward (Robin), who has made occasional appearances for Pro Wrestling Unplugged.

Though no formal plans for a second Americana set have been announced, there is wide speculation that a follow up set will be produced.