Calgary’s Biff Wellington (Shayne Bower), who was a major player in the ’80s Stampede Wrestling and a regular in Japan for years, has died. He was 42.

Bower had major health problems over the last few years, mostly related to his back, as he talked about in a 2004 interview with SLAM! Wrestling.

Fielding talked to Bower Sunday or Monday of last week. “Everything was great. His daughter had just moved out here and he asked me if I could keep an eye on her,” Fielding said. “I couldn’t get ahold of him on Wednesday or Thursday. I phoned his dad, and his dad said, ‘Well, I’ll just wait to see if I hear from him.’ Friday, nobody had heard from him, so I phoned again. This morning his dad called me at about 8 o’clock and said that they had found him and he was dead.”

Bower was found dead in his bed. “His dad said that the initial report was that they think he had a heart attack. He said they don’t know if they are doing an autopsy. I know it wasn’t drugs, because I know Shayne. He’d had a real battle with drugs, and he’d been clean for the last two years,” said Fielding.

The Calgary, Alberta native trained with the Hart Brothers in the mid-’80s, but said his primary trainers were Mr. Hito and Hiro Hase. Childhood friend and neighbour Milad Elzein (later Abu Wizal) was his “in” to the closed business.

“My best memories of Shayne are growing up with him, and then watching him break in and doing really good. He and Jeff Wheeler were the only ones coming out of the Hart camp. He was an athlete,” said Elzein. “I’ve known him ever since we were 10 years old.” Even today, Elzein’s parents live next to the Bowers, so he kept in touch and updated with Shayne’s trials and tribulations.

Being a babyface on the Stampede roster was a tough go, having to fight the popular Owen Hart for screen time.

During his career, Bower was known at various times as Biff Wellington, Beef Wellington, and Bobby Hart in the Maritimes. He worked a few ECW shows, had a couple of tryout matches with the WWF, and made a couple dozen trips to Japan. 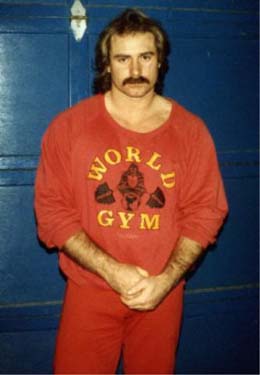 “I did all my best work in Japan, by far. I had some great matches with Liger, Jushin Liger. That would probably be the highlights,” he explained to SLAM! Wrestling in 2004. “Actually, one time me and Chris Benoit had a match. We were always tag partners. We were on TV and something happened in Sapporo, Japan, and they put me and Chris against each other and gave us 15 minutes of live TV. I’ll tell you, that was probably a highlight. We had a hell of a match.”

“I worked with Biff/Beef in Japan a few times and really appreciated his skills. He was very good to be around as well. I always wondered why a guy like him never got a big break somewhere as he was as good as many of the top stars in the ’80s and ’90s. Actually, he reminded me a little of Dynamite, only bigger,” said referee James Beard. “I recall being really surprised at the things he could do in the ring and his style as his appearance and gimmick name seemed to suggest something different. He could move, he was technically sound and had a great feel for the psychological aspects.”

Fielding concurred. “The stuff that he did in Japan, I’ve got a library of tapes that would blow your mind.”

With was with Benoit that Wellington had his biggest North American exposure, working on June 22, 1992, against Jushin “Thunder” Liger and “Flyin'” Brian Pillman at WCW’s Clash of the Champions XIX. The Wrestling Observer rated the match *** 3/4 stars in its June 29, 1992 issue. “Not a match of the year, but still a very good match. Liger and Benoit weren’t at their best, but both still looked very good. The fans just didn’t know how to react to Benoit & Wellington early but they did eventually get into the match (one of only three matches on the show that can be said for),” editor Dave Meltzer wrote.

“He could have been bigger. A lot of what happened with him, he somehow screwed up in Japan. I don’t know what really happened,” said Elzein. “It’s the drugs, man, I’m telling you, it’s the pills. He was a great worker when he broke in, and he started taking that shit, and things started going for the worst. Then when Benoit made it and he didn’t, it got even worse.”

Though emotional, with voice wavering, Fielding emphasized the good memories of Bower. “I never met anybody in the world who enjoyed a good laugh like him. The good ribs, that kind of stuff, not the mean ones you hear about, just the good funny ribs,” Fielding said.

The Biff Wellington name had outlived his era, said Fielding. “The impact that guy had in Western Canada, 10, 15 years after Stampede Wrestling ended, we’d do an independent show, and people would still mark out for Biff Wellington. It made me laugh. We’d be in the dressing room, laughing, half of these goddamn kids wouldn’t even have been old enough to watch Stampede, but the name lived on. He’s no Hulk Hogan by any means … just for some reason, he had a real cult following in Western Canada. Then when did that ECW couple of spots there, it really seemed to cement his name.”

He is survived by his daughter Alexandra Shayne Bower, his mother, father and brother.

Funeral arrangements are still being made, with the service expected late this week, or early next week. Bower will be cremated.