I can’t say that I knew Shayne “Biff Wellington” Bower that well. In fact we haven’t seen each other or spoken in years. But he will always have my respect based on the brief amount of time I spent with him.

I was a green 17-year-old kid who had spent the previous nine months training to be a pro wrestler under Keith Hart. The hours spent at BJ’s Gym, in the Dungeon and in Stu’s backyard was finally going to pay off as I boarded a bus that early September morning in 1996 on my first wrestling tour, a 10 day trek through northern Alberta and B.C. I was finally going to get to wrestle in front of people and take a step closer to achieving my dream.

I took everything in on the bus ride up. I was surrounded by legends — The Great Gama, Cuban Assassin, “Champagne” Gerry Morrow, and stars I’d gotten to know watching CNWA and Rocky Mountain Wrestling like Kenny Johnson, Steve Rivers, Jason Anderson and Steve Gillespie. There were some other young new guys on the bus as well and you could sense our excitement. 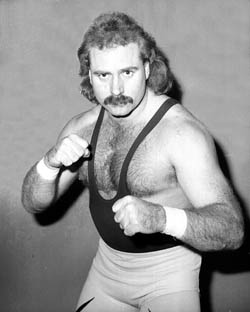 However I quickly learned the downside of the business. My roommates for the night felt that the kid they had been paired with was best kept outside, locked in the hallway, while they hooked up with a woman inside. It was sitting outside that room, exhausted and nearly in tears, that I met Biff, who after shaking his head in disgust, took me to a nearby diner to eat.

From that point forward, Biff was my roommate. I don’t know if he was the one that pushed it on Bruce Hart or if someone else suggested it, but I spent every night of the rest of the tour sharing a room with him. While during the shows I’d watch each and every match (For a tour that was supposed to have me wrestling, I wasn’t allowed to wrestle much) but at night I would pick his brain. While others would head off to the bars (and being 6’8 I got away with joining them a few times) he’d usually retire to his room and stay out of trouble. I’d go back to the room and we’d talk about wrestling — Japan, Stampede Wrestling, his brief foray into WCW at Clash of the Champions, the state of the business, and much more.

When Bruce Hart — booking the events — decided to play an exceedingly cruel and humiliating rib on me, it was Shayne who explained what had been said so that I knew up front what was going on, and also got me calmed down as I pondered why someone would do such a thing. I think he may have stood up for me a few times on that trip as well.

I learned a great deal on that tour and despite the fact that in many ways it was the catalyst for the end of my so called wrestling career, I will always have some very fond memories. I learned that the guys we boo in the ring are often the ones that are the nicest behind the scenes.

Shayne Bower treated a 17-year-old kid with respect and dignity, which is something that very few would do in this business. For that respect, he will always have mine.