Even though its name is well-known throughout the United Kingdom, the North of England town of Wigan, in Greater Manchester, is not renowned for any one thing. Perhaps more so than anything, it is recognized for its sports teams, with Wigan Athletic playing high-profile Premiership soccer, and Wigan Warriors just on the come-down after many years of rugby dominance. 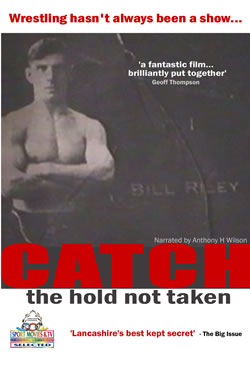 But the global influence of Wigan’s soccer and rugby teams pale in significance to that of another of the town’s sports, the much-forgotten catch-as-catch-can wrestling, or Lancashire wrestling. Catch-as-catch-can has had an influence extending to virtually every corner of the globe, both in freestyle wrestling, mixed martial arts, and indeed, professional wrestling.

Catch-as-catch-can developed out of Wigan’s mine pits in the late 19th century, where tensions were wrought in the dreadful conditions faced by its workers. Anyone who was caught fighting in the pits would be instantly dismissed, and so the workers took to grappling in the nearby fields to settle their scores. These contests even had rules, which stated that you were not allowed to gain advantage by ungentlemanly means, such as eye-gouging or hair-pulling.

Over the course of time, the more skilled competitors shone through. Often, they would use joint-locks to subdue their opponents, applying technique rather than outright brawn or aggression. Others were keen to learn those techniques, including Bill Riley, who would later be the man most synonymous with catch-as-catch-can.

Riley learned the sport from his early teens, and quickly proved to be one of its greatest ever practitioners, traveling the world showcasing his ability, and being named the British Empire Champion during a tour of South Africa in the 1930s. But during this time, Riley also competed in some professional wrestling bouts, such as in 1933, when he faced “Dirty” Jack Pye, a legend in British wrestling history. A reputed crowd of 33,000 turned up to witness the event at Wigan’s Springfield Park.

It was in the 1940s that Riley opened the Snake Pit gym, although in reality, it was little more than a tin shed. There, Riley would pass on his knowledge, which in many cases became a grounding for a career in professional wrestling. Karl Gotch and Billy Robinson, in particular, went on to become true legends in professional wrestling, with others such as Bert Assirati and Billy Joyce spoken of in almost mythical terms by wrestling historians.

Catch-as-catch-can fell on hard times in the 1970s, with a flashier style of professional wrestling now more appealing to the masses, and interest in the amateur sport at low point. The Snake Pit closed, although by the end of the decade, it had re-opened due to the persistence of Roy Wood, a protégé of Riley’s. When Riley passed away in 1977, there was a further concerted effort to make sure that catch-as-catch-can remained a part of the local culture, and eventually funding became available to rebuild the Snake Pit, just a couple of miles away from its original setting, in the village of Aspull. The gym is now known as the Aspull Olympic Wrestling Club.

“Our film is about how catch-as-catch-can evolved from the early days of the pit miners,” co-director Mike Todd told SLAM! Wrestling. “We wanted to give a voice to the ‘ordinary’ wrestlers who kept the sport alive, and carried on the tradition of Riley’s gym.”

Keeping in mind this objective, Catch is an excellent documentary, which plays a little like a library film, in the sense that this is a down-to-earth production, speaking of real people rather than “superstars.” Visually, it looks nothing like a WWE documentary, for example, and in many ways the low budget of this film serves as a metaphor, pointing to the amateur status of the original sport.

But while their insights are interesting, the stories told by the likes of John Rigby MBE, Jimmy Niblett, Roy Wood, and Tony Francis are pure gold. You may not have heard of any of these men, but their tales of how they learned and applied their craft are fascinating.

Some of the footage used throughout the film is also exceptional. There are glimpses of a more elderly Riley getting down on the gym’s mats to show a hold to a student, and some staggering video footage of a 1939 bout featuring the aforementioned Jack Pye. There is also a brief look at an Antonio Inoki vs. Karl Gotch contest from 1972.

If there is one mild disappointment to the DVD, it is that the careers of some of the more famous Riley students are not dealt with in any depth. The glaring omission is Billy Robinson, who had a notable pro wrestling career in England, the USA, and Japan.

“We would have particularly liked to have spoken to Robinson, and Karl Gotch,” said Mike Todd, “but we made the film on a very low-budget and couldn’t afford to visit Billy in Japan, or Karl in the States. But I think our story is more about the history of catch-as-catch-can, than about the individual wrestlers themselves. In the end, we felt that Catch told the story that we wanted to tell.”

With a running time of 60 minutes, Catch: The Hold Not Taken is an excellent look at the history of the sport, encompassing professional wrestling, Olympic wrestling, and mixed martial arts. Those who are interested in the early history of any of these sports will likely revel in what Catch brings to the table.

“Catch-as-catch-can has, in a way, been forgotten by history,” Todd told us. Thankfully, though, we now have Catch to preserve it.