Sandy Barr, a longtime fixture on the Pacific Northwest wrestling scene as a wrestler, referee, trainer and promoter, has died of a heart attack at his Portland, Oregon flea market. He was 69.

Born January 21, 1938, Barr got into wrestling in 1957, in Idaho Fall, Idaho, for a promoter named Cliff Thiede. He mostly worked in the west, including stints in Calgary, Vancouver, Idaho, Utah, Nevada and Arizona. He was not a big man, and worked a lighter style, going barefoot in the ring. Barr worked programs with Gorgeous George and Dr. Jerry Graham at various times. 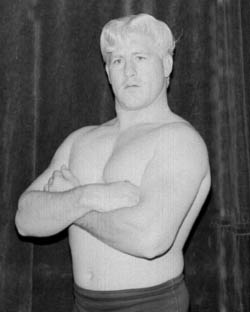 “When I started in 1957, most of the wrestlers were older and bigger than me,” Barr told the DutchSavage.com website. “After I was able to prove myself in the ring the promoters loved me.”

A member of the Ring Around the Northwest Hall of Fame, Class of 2007, Barr shared some of his memories in wrestling with this writer in August 2006.

For one, Barr was not high on his brief time in Calgary’s Stampede Wrestling, and was disappointed with promoter Stu Hart. “He promised me the moon, and didn’t give me anything, not even when I left,” Barr said. “In Lethbridge, I set the ring up every week, I tore it down. He was going to pay me extra for that … We were having sellouts. I said, ‘Where’s the extra money?’ (Doing Stu’s voice) ‘I haven’t gotten the boat paid off yet.'”

Barr then went to Vancouver, working for promoter Rod Fenton, whom he’d worked for in Phoenix. “My money tripled my very first week, so that kind of tells you a story.”

Eventually, Barr settled in Oregon, and would work with promoter Don Owen for decades, as a wrestler, as a referee and running the facilities and concessions. “I had five kids so I wanted to settle down somewhere,” he explained. He had an uncle that did construction, so he took a job that paid $4.99 a hour, and the most he’d ever been paid by the hour before was $2.22; “You had to work your ass off, but while I was doing that, I was getting on TV shows for Rod Fenton in Seattle, and on the one here for Don [Owen] in Portland. Then I got to go on the big shows too.”

When called upon into the late 1980s, Barr would work an occasional match as a fill-in. “I worked with Sandy a couple of times. I didn’t really like working with him, because he worked in the ’60s, and he worked barefooted,” said “Playboy” Buddy Rose. “I could not do his style of wrestling. He wanted to do too much with his barefeet, climb up on you and sit on your shoulders, do something not quite Mexican, but just off-the-cuff stuff. I was like, whoa. I could do off the cuff, but his stuff, I’d just never done.”

Ed Wiskoski blamed Barr’s lack of conditioning for an poor performances late in his career. “I worked with Sandy when they were shorthanded, in other words somebody didn’t show up or somebody had left. He smoked so bad that, hell, you had to carry him. He always bragged, ‘Oh, I went 30 minutes with you.’ I said, ‘Yeah, and I had to carry you for 29 of them.'”

It masks the fact that Barr was legit tough, explained Rose, who said that Barr was the “policeman” in the Portland territory when he started. If a fan wanted to challenge a wrestler, he’d have to go through Barr. “Then the guy would get into the ring with Sandy after the show was over. Sandy would wrap him all up, because Sandy could shoot,” said Rose. 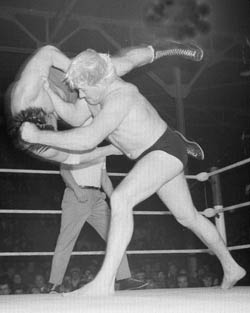 In March 2006, Dutch Savage said Barr could still go. “Sandy, to this day, could probably take the head off a lot of guys in the WWF,” said Savage. “Sandy’s real old-school.”

Sandy’s son Jesse Barr finished school in 1978 and wanted to become a pro wrestler like his father, so a new career as a trainer was started for Barr. Another son, Art Barr, would go on to the greatest fame. Two more sons, J.R. and Sean, worked locally in the Pacific Northwest.

“Jesse was a great amateur, and he was a very good professional wrestler. He didn’t have the charisma and personality that Art had. Art was all charisma,” said Barr.

Aside from his children, Barr’s most famous students were probably women wrestlers Velvet McIntyre and Princess Victoria.

McIntyre started training with Barr in 1980. “It was hard. I guess you would call it the older-style training. You didn’t know anything was fake until you actually had your match, type thing,” she said. “It was basically a couple of hours ring time every day. A couple hours calisthenics, stuff like that, every day, running to and from the arena every day. It was hard work. My head was like a watermelon for about the first month.”

From the 1970s until the late 1980s, Barr was one of the main referees for Portland Wrestling. When it went out of business, he started promoting, which he continued to do up until his death on Saturday.

“Sandy Barr has my utmost respect. True old school guy who loves wrestling,” Brad Anderson told Ring Around the Northwest in May 2007. “He kept running shows when I was there and I know he wasn’t making money because the business was down but he ran anyway to keep the boys working. I could continue pages of accolades on Sandy.”

ADDENDUM: There will be a memorial service and potluck for Ferrin Charles “Sandy” Barr in Portland, Oregon at 1pm on Saturday, June 9th at Cathedral Park located at the corner of N. Pittsburg Ave. and N. Crawford St. under the St. Johns Bridge. There are also public viewings scheduled for Thursday between 2pm and 5pm and Friday 8am to 5pm at Wilhelm Funeral Home located at 6637 SE Milwaukie Ave. in Portland.