Mondo Lucha A Go-Go a hurricarana of a book

The world of lucha libre is colourful and artistic, a passionate dance involving the luchadores and the fans. With the arrival of Mondo Lucha A Go-Go on the bookshelves, there’s finally a book that truly captures what lucha is for us gringos.

Mondo Lucha A Go-Go: The Bizarre and Honorable World of Wild Mexican Wrestling, by former WWE writer Dan Madigan, is as much an art book as a reference guide, a pop culture fun fest as much as it is a cultural treatise. The photos, made up primarily by the photo collections of Edward McGinty, Dorothy Lee and Daniel Chavira, are as much reason to buy the book as the text. The spectacular reproduction of film posters like Santo en El Tesoro de Dracula make it even better. 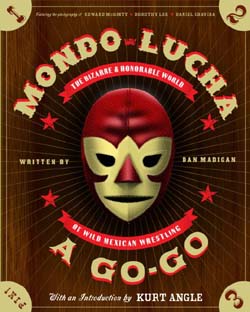 The 272-page book takes the reader into the world of lucha libre, what it means and how it developed. It describes the matches and how the action differs from what North American fans might be used to. There are profiles on the huge names like El Santo, Blue Demon and Mil Mascaras, as well as the next echelon grapplers like Tarzan Lopez, Diablo Velazco and Tinieblas. Plus, throw in sections on the minis, lucha libre movies, lucharesu, and even the burlesque Lucha Va Voom, and it’s a pretty packed book.

Turns out it was originally even more packed.

Madigan, a 38-year-old screenwriter (See No Evil), originally wrote 85,000 words, and had to knock off 35,000 for publisher Rayo (an imprint of HarperCollins).

“It’s a great-looking book,” Madigan told SLAM! Wrestling, explaining that he helped a little with design, and consulted with friend Tim Sims, but that most of the credit goes to Rayo. “I had certain ideas what I wanted to do. I’m very, very happy with the way things turned out. Everybody at Harper Collins actually freaked over the book. They told me when they first put the name out, vendors weren’t quite sure; but once they saw the final product, they doubled distribution.”

The Mondo Lucha A Go-Go project fell in Madigan’s lap while he was still employed by WWE. A friend had just started working for HarperCollins and dropped Madigan’s name when lucha libre came up as a potential topic for a book.

Madigan admitted that he wasn’t the most knowledgeable of lucha fans, but he knew who to consult and threw himself in all the way. The book is dedicated to the late Eddie Guerrero, and Madigan said that he was a key figure.

“I was a fan. I was talking to Eddie. Eddie was very excited about the book because there’s a whole chapter on his dad. His dad’s a legend in lucha. I was corresponding with Eddie, but unfortunately, he passed away — that’s why I dedicated the book to him. So I didn’t want to go back to the Guerrero family, ‘Gee, sorry he passed away, can you help me?’ just out of respect for them. So I decided to ask around,” Madigan explained. “There’s a lot of people, a lot of different promoters that I talked to, wrestlers themselves, Eric Caidin at Hollywood Book & Poster — he has a huge collection of photos, of all types of wrestling, but Mexican wrestling, lobby cards. Then I started contacting people, actors; I talked to Blue Demon Jr., just reached out to a lot of people — Gasaprin was the voice of lucha libre in California, mask makers, collectors. Everyone was just overly friendly. Cassandro is in here, but also he’s an exotico, an openly, flamboyantly gay wrestler. He was very, very helpful and insightful opening up a lot of avenues to me.”

Madigan turned to a few friends to help with the writing of the book as well. Kurt Angle wrote the foreword, Keith J. Rainville penned pieces on collecting masks and lucha films and Ranjan Chhibber helped out with sidebars on the decline of lucha in the U.S., Paul Heyman’s influence on lucha in America in the 1990s and lucharesu, the Japanese version of lucha libre.

Chhibber, who has a Ph.D in Media Studies from the State University of New York and was a professor at The George Washington University, met Madigan in WWE, where he was also employed as a scriptwriter. “We clicked because we’re both horror film fans,” said Chhibber. A Heyman loyalist who left WWE when the former ECW honcho was turfed, Chhibber was a natural choice to write about Heyman for Mondo Lucha A Go-Go. “I felt that should be chronicled because Paul, I fell, is unfairly buried and I wanted to set the record straight.” 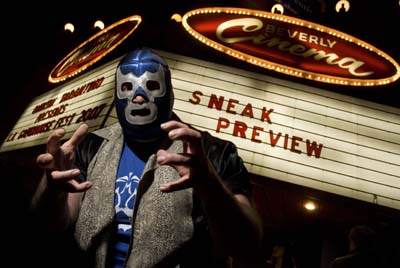 The switch from being a writer for the micromanagement-obsessed WWE, where scripts for Raw or Smackdown would be switched minutes before airing, to writing on his own was radical for Madigan. “I had total autonomy. No one at Harper Collins knew about lucha libre. It’s still very cultish, just floating around,” he said.

Madigan was often one of only a couple of white faces at southern California lucha shows. “To most gringos, Americans, it’s just a bunch of guys in masks running around. Most people know it through the Santo films. They didn’t really know that there’s a really long, proud history of Mexican wrestling,” said Madigan, who has jokingly developed his own lucha alter ego, Baron von Lustmord (formerly the feared and dreaded Baron von Bava). “Eddie Guerrero, his brothers, Hector, Chavo, his dad, Gory, was a legend, Rey. A lot of guys came up from Mexico to work for Vince — Mil Mascaras in the ’70s. So no one really talked about the history of the sport, its inception, the masks and the idea behind the masks, what’s going on with the feuds and rivalries. That was the thing that I really wanted to get into, the history of the sport, as a sport and artform.”