“I love what I do from bell to bell,” Chris Benoit says.

Although Benoit may admit to being exhausted from the constant grind of life on the WWE’s schedule, he says that his reward for enduring the grind “is stepping into the ring every night,” for this is what he’s dreamed of doing since he was about 11 or 12 years old. 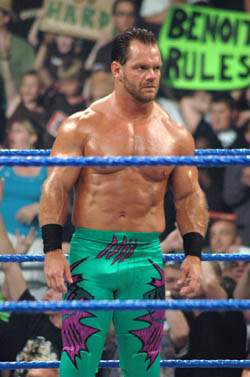 Chris Benoit at the Smackdown TV taping Tuesday, May 29, 2007 in London, Ontario. Photo by Mike Mastrandrea

Long respected as one of the finest wrestlers in the business, Benoit says that when he first looked to the ring for a career, his dream was simply to wrestle for Calgary’s famed Stampede Wrestling territory. The reality has now surpassed that dream. Everything he has accomplished since then (Japan, ECW, headlining Wrestlemania, World championships) has been, in Benoit’s own words, “icing on the cake.”

Benoit spoke with SLAM! Wrestling just hours before he would team with Batista to take on U.S. Champion MVP and World champion Edge on Saturday Night’s Main Event, taped in Toronto. Benoit said that he was looking forward to taking part in the event. Benoit explains that because Saturday Night’s Main Event is so unique, there’s an ambience to it that makes it different and special.

With the announcement of the upcoming WWE Tri-Brand Draft comes rumours that Benoit may be headed to Raw. Meanwhile, Benoit says that the Smackdown locker room is in good shape. Benoit would be a part of that locker room when Smackdown came to the John Labatt Centre in London the night after Saturday Night’s Main Event was taped.

“Morale is great,” he reports, adding that there is a lack of the ego problems that plagued World Championship Wrestling during Benoit’s time there in the mid-to-late 1990s. The superstars on this roster, however, have pulled together for a common goal.

Benoit does admit that the recent rash of injuries to stars like The Undertaker, Mr. Kennedy, Booker T, Rey Mysterio Jr., Shawn Michaels, Gregory Helms and others have had a “tremendous impact.”

“We miss their leadership,” Benoit says, adding that these injured superstars have been leaders both in the ring and in the locker room, and their absences have had a “huge affect” on the rest of the roster.

Benoit admits that WWE has “a lot of top players on the sidelines. It’s up to the newcomers to step up to the plate right now.” He explains that while the injuries to these top stars have robbed WWE of some of their in-ring and locker room leaders, “it’s opened up a lot of other doors for other spots.” Those newcomers that will fill those spots, Benoit says, are the next generation, those wrestlers that are going to lead the industry into the future.

One such newcomer that Benoit is very high on is the same one that he has found himself across the ring from quite a bit lately: Montel Vontavious Porter, aka MVP. Benoit says that MVP is one of the people he means when he talks about those who will take the business into the future.

Benoit and MVP have, since Wrestlemania, been involved in a program over Smackdown’s United States Championship. Benoit retained the U.S. title at Wrestlemania and again at Backlash, only to fall to MVP at Judgment Day, when the challenger won two straight falls in a best-of-three-fall bout to claim the title.

In a recent interview with IGN.com, MVP praised Benoit. “There’s nobody more intense, there’s nobody who works harder. Chris Benoit is just amazing. Even if you’re not a fan of wrestling, if you see him in the ring, you have to do a double take and recognize there’s something about him that’s different than all the rest.”

In that same interview, MVP talked of the respect he has for Benoit in how he treats people, both in and out of the ring. The respect between the two in-ring combatants is mutual. Benoit says that MVP is improving by “leaps and bounds.” He continues by saying that he is very proud of the progress that the 33-year-old is showing in the ring. “He’s improving every time he gets in the ring,” Benoit notes.

Coming from someone like Chris Benoit, that is high praise indeed.