Promoters are not especially loved in the wrestling business. The Us versus Them mentality of employer and freelance employee is a rocky relationship at best. Yet to a man, Pacific Northwest grapplers insist Sandy Barr as a promoter was fair and well-liked.

Ferrin “Sandy” Barr, who died Saturday at his flea market in Portland, Oregon of a heart attack at age 69, had been a wrestler and a referee before turning to promoting. His primary town during the heyday of Don Owen’s Portland Wrestling territory was Salem, Oregon. Later, when Owen closed down the business in 1991, Barr promoted many of the same towns. 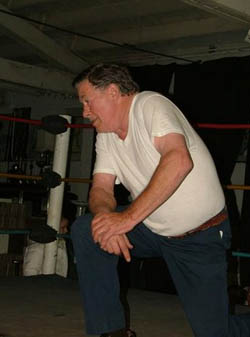 Sandy Barr at a recent show at his flea market. Photo by Richard Strickland

In an interview with this writer in March 2006, Barr talked about purchasing the rights to Salem for $35,000 from Elton Owen, Don’s brother. “The biggest house Elton ever had in there was $3,300. The tenth week, I put Andre the Giant against Don Leo Jonathan, and drew $11,000. I outdrew him in Seattle, I outdrew him in Portland, I outdrew him in Spokane. They were just madder than hell, and asked if I super-promoted it. I didn’t. I had the MC on TV ask Jonathan if he could slam the Giant. ‘I could slam that big guy.’ It drew.”

But to the wrestlers on those shows, it was more than just the fact that the shows drew well; Barr also paid well.

“I have all the respect in the world for the guy,” said “Playboy” Buddy Rose. As a promoter Barr was “fair as could be. He got heat from Don and Elton for paying us too much. One time he had a main event with Andre the Giant and Don Leo Jonathan and I had a hair match — it was like a triple main event … We all got five hundred bucks in Salem. … He wanted to show that if you worked for him, you were going to make money if you drew the money. He found out real quick too, the word got back to Don and Elton what we made. They had to tell him, ‘Lower it a little bit because you’re going to make us look bad.’ That’s a complimentary thing.”

In his autobiography, “The Dynamite Kid” Tom Billington told a similar story. “Sandy Barr, who was Jesse Barr’s dad, used to promote Salem, and I know he barely made enough money to get by. The only time he made anything was once a year when all the big names came in, like Harley Race and Andre the Giant, and then they’d do great business. Sold out every night. Sandy would be so excited about making all this money, after he’d paid the big names, he gave the rest of it to us, the wrestlers who were there every week. All year long he’d be scraping by, and, when he did make some money, he gave it away. But he was a very good, kindhearted man, a great man — especially for a promoter.”

“He was a genuine guy, a good guy,” recalled Ed Wiskoski. “If you want to compare him to Don Owen, Don Owen if he had a bad house, he’d take back the winnings when he had a good one, whereas Sandy could have three bad ones, and then he’d have a good one, but he wouldn’t take his money back. He would pay fairly on that house … take the losses on his own.”

Rose concurred. “Even if he didn’t make any money, he wanted to make sure you made money. Wow, that was the opposite,” said Rose. “When Sandy booked a town, you were happy to work it.”

More current wrestlers echoed the veterans’ comments. “Sandy has a fantastic mind for the business and has taught me a lot,” John Rambo told the Ring Around the Northwest newsletter. “Sandy knows the business inside and out. He has lived the life a lot longer than I have and he has taught me a lot about match psychology, techniques and things like that. Sandy Barr knows professional wrestling, period. People may not like him or how he has promoted shows, but the bottom line is he knows the business.”

“Today we have lost a true wrestling legend that loved this business more than anyone I ever met,” wrote Tony Terrific on the Pacific Northwest Wrestling’s Bottom Line newsboard. “To quote him he has made and lost a million in this game and still loved it. He was my trainer and my friend and I will miss him. So I will leave you with what I learned from him — ‘always shoot so the crowd never doubts it.'”

In another RATNW interview, non-wrestler Jeff Manning talked about Barr as well. “Ya gotta love Sandy, his stories are wonderful for us ‘older guys.’ I worked for Sandy for about 5-6 months as a ref for the most part. A few times he was missing a TV guy so I filled in as color or play by play and that had been years without doing it.”

In Portland, the wrestling was promoted at the Armory for years. Besides refereeing, Barr was also in charge of the concessions at the facility. He made the deal with Don Owen. “He was always honest with me, and I was always honest with him,” Barr said of Owen. “I had a big family, and an opportunity came for me to stay here. I managed the Armory.” Eventually Owen bought the Armory and asked Sandy to run it as well as the concessions, while Sandy was still wrestling; “I was doing good, probably the best I’d ever done in my life.” Three or four months later, Owen sold the Armory to a brewery across the street.

Up next, Portland Wrestling found a home in a bankrupt bowling alley. Again, Owen put Barr in charge of running the facility, redubbed the Portland Sports Arena. “He said, ‘Sandy, you’ve got to have a job or something, because you’re not making enough managing the place and running the concessions, and I can’t book you forever; I’ve got to have new faces.’ I said, ‘Well, I think I’ve got a use for the building.’ I had an idea for a flea market. I had figured out how I was going to operate it. He said go ahead,” said Barr. “It worked really good and in three months I was sold out, and it stayed that way for probably six years.”

Barr got $25 to clean the building after a wrestling event, and Owen got 50% of the concessions; “I was using him, but he was getting more out of it than I was, and I was doing all the work,” Barr said.

Then around 1972, things began to go sour. Owen gave his sister rights to the concessions. She was rarely around, however, and the concessions suffered.

It was general knowledge that Owen took advantage of Barr over the years, said Dutch Savage. “Hundreds of thousands of dollars he’s taken from Sandy.”

In conversation, Barr isn’t one to badmouth something, even the deceased Don Owen. “He always had a good foot forward, so everybody liked him,” Barr said, explaining that Owen really only came down from his turkey farm once a week to hand out paycheques. “Basically, in a nutshell, everyone talked good about Don, mainly because he always had his best foot forward when — when he died, there was only one wrestler fly in for his funeral, Mr. Perfect [Curt Hennig]. … We had lots of the national stars here that we started, lots of them, not just a few.”

Barr’s continual refrain through the years was that he claimed he must have paid for the Sports Arena three times over with the rent that he paid Owen for the flea market.

When Owen decided to get out of the wrestling business in 1991, Barr made a deal to take over the Sports Arena. However, Owen still owned the building and raised the rent three times; “And until I paid the down payment, I couldn’t have the concessions,” said Barr. 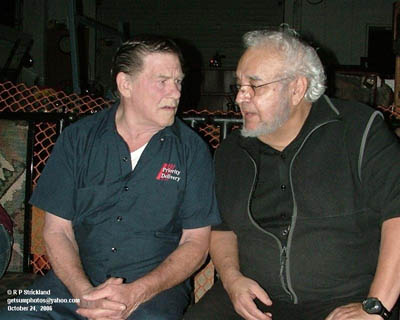 Sandy Barr and Tito Carreon in 2006. Photo by Richard Strickland

As the primary promoter in the Pacific Northwest, Barr’s biggest coup was scoring disgraced figure skater Tonya Harding for a show. He rented a baseball stadium, stacked the card with many of his son Art Barr’s luchadore buddies, and had high hopes. However, it all went awry when the athletic commission insisted that Harding was not a licensed manager and could not remain at ringside. Eddie Guerrero was on that show, and in his autobiography, he talked about his best friend’s father. “Sandy Barr was a great guy. He was a pretty good wrestler back in the day, and when he became a promoter, he was still one of the boys.”

Stubborn to a fault with his determination to keep promoting, in 2006, Barr was able to explain how the times had changed. “[WWF] was on TV six nights a week. Why would somebody pay to see somebody who wasn’t a star when they could see all these stars on national TV for free.”

For the last decade, Barr continued to run his flea market at a different location and train wrestlers there as well. He ran a weekly wrestling show at the flea market, and occasional spot shows at local bars. It was a frustrating time for a man who once was the man in the Pacific Northwest — there were eight people licensed in the city of Portland to promote alone.

This Tuesday’s St John’s Sports Arena (Sandy’s Flea Mart) show has been cancelled, but plans are underway for tribute shows, including one at the St. Johns Community Center on N. Central in Portland set for Sunday, June 10 at 2 p.m., as a benefit for Friends Helping Friends.

Josh Barr has set up a website for his father and all his friends — www.barrtime.com. Funeral service arrangements will be announced there, and condolences are welcome through the guestbook.

ADDENDUM: There will be a memorial service and potluck for Ferrin Charles “Sandy” Barr in Portland, Oregon at 1pm on Saturday, June 9th at Cathedral Park located at the corner of N. Pittsburg Ave. and N. Crawford St. under the St. Johns Bridge. There are also public viewings scheduled for Thursday between 2pm and 5pm and Friday 8am to 5pm at Wilhelm Funeral Home located at 6637 SE Milwaukie Ave. in Portland.