DETROIT – Elijah Burke won’t be in the main event Sunday at WrestleMania 23, but Thursday night at the historic Gem Theatre in downtown Detroit, all eyes were on the ECW upstart as he won the fifth annual THQ Superstar Challenge video game competition over a dejected Carlito. 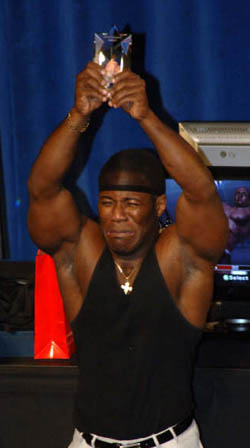 As Burke “wept” tears of joy and accepted the trophy Shelton Benjamin won last year in Chicago, all Carlito would ask is why he wasn’t wrestling on Sunday.

“Thank you to all my adoring fans,” said Burke to the packed Gem ballroom before the group Nonpoint took the stage. “I’d also like to thank God first and foremost, in advance, for helping me win tonight and for giving The New Breed the victory on Sunday.”

A total of 16 WWE superstars took part in the tournament that featured the new 2007 Raw vs. SmackDown! game. Each wrestler, some Divas not included, has their character in the game itself, complete with their favorite holds and maneuvers.

“I can’t tell you how I am in the game because I’m not in the game,” muttered Kenny Dykstra. “THQ really dropped the ball on that one.”

Before the actual competition, a handful of wrestlers met the assembled media horde (some came from as far away as the United Kingdom) and discussed WrestleMania, video games and anything else that happened to come up. For the most part, the wrestlers stayed in character and hyped the competition for later in the evening.

“I’ve mastered four moves,” said Mr. Kennedy. “My newest one is the running boot wash. I just figured that out today. I’m a pretty big gamer. I just got through 65 or 70 percent of Saint’s Row before I just went on to another game and right now, I’m playing Legend of Zelda. But we’re on the road 250-300 days a year and when I’m home, my girlfriend wants me to spend time with her and not play with myself. But tonight, I’ll play with myself in front of all these people.”

Kennedy, ironically enough, was eliminated in the first round by Chavo Guerrero, who played Eddie Guerrero in the game and noted afterwards that it was a bit of redemption because Kennedy was Eddie’s last-ever opponent before he died.

ECW World champion Bobby Lashley made an appearance and said that he’d practiced a few video games, but nothing serious. Most media just asked about the so-called “Battle of the Billionaires” match set for Sunday where Lashley will tangle with Umaga with Donald Trump’s and Vince McMahon’s coifs on the line.

“I talked to Donald’s wife and family and I assured them I will win and not let Donald Trump go bald,” said the always soft-spoken Lashley. “They have no worries. I just need to watch my back because Umaga is a crazy, crazy guy. I’ll just have to give it all I got.”

Burke had the crowd going by disrespecting the original ECW and by also rambling on about himself. He said just prior to the video game portion of the night that he is the “most natural adaptable athlete in WWE” and that he’ll adapt to anything the Superstar Challenge threw his way.

In the opening round, Burke beat CM Punk. In the quarterfinals, Chavo went down and in the final four, WWE Women’s champion Melina bit the dust to the New Breed member.

The finals weren’t without controversy, however.

As Burke went for the pin on Carlito, the ref counted to two and then a “Quit” screen came up. Superstar Challenge hosts Jonathan Coachman and Matt Striker didn’t know what to do until an on-scene technician fixed the problem in a matter of seconds, just to get the game restored and the video game version of Nick Patrick finished the three count.

The Divas put up a fierce battle early as Ashley beat Mickie James and Melina eliminated Kelly Kelly. Ashley went out in the second round against Carlito, who had beaten Johnny Nitro in round one, while Melina beat Jeff Hardy, who had beaten Dykstra in the opening round, before bowing out in the semifinals to Burke.

“Growing up, I played a lot of video games,” said Ashley, whose character in the game never loses her backwards baseball hat. “I don’t play a whole lot now because of our travel, but I’ve played Xbox and I have a Playstation.”

One young fan in the crowd at the Gem even had the newest Playboy with markers inside noting the Ashley photos.

Coach and Striker handed out prizes all throughout the competition, such as autographed video games, autographed T-shirts and jerseys and even a commemorative WrestleMania 22 three-disc set.

World Heavyweight champion Batista was part of the competition, but he went out quickly to MVP in the first round. MVP was eliminated by Tommy Dreamer in the second round after Dreamer booted Lashley in the opener.

Matt Mackinder isn’t a gamer per se, but if he was, he’d probably stick his tongue out the way Chavo Guerrero was all night.