TROY, Mich. — Over 400 fans turned out to see Mick Foley on March 28, during a book and DVD signing at a Kmart retail store in Troy, near Detroit. SLAM! Wrestling was there to cover the event and even conducted an impromptu interview with The New York Times best-selling author … in the women’s clothing section.

“I’m flattered that after seven years of semi-retirement that so many people would turn out,” said Foley. “There’s always the fear when you do a book signing that no one will be there. It makes me appreciate what Al Snow goes through on a daily basis.” 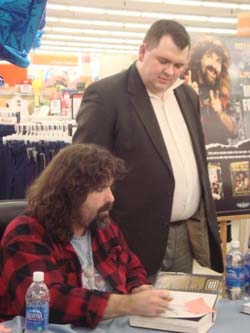 While the autograph session wasn’t scheduled to begin until 6 p.m., some fans had been waiting in line nearly 10 hours to meet “The Hardcore Legend.”

While most fans were armed with Foley’s latest book The Hardcore Diaries and Mick Foley’s Greatest Hits & Misses DVD, the former three-time WWE Champion signed a wide array of items ranging from title replicas to a sneaker straight off a fan’s foot.

After staying slightly past the scheduled time to ensure everyone in line received an autograph, Foley addressed his rumored major announcement regarding this Monday’s post WrestleMania Raw at the Ej Nutter Center along with his literary future with SLAM! Wrestling.

“I would like to make a major announcement, but I can’t just go and grab the TV time. Assuming that I’m on the show and given a microphone, I will make an announcement, but that’s a wait and see type of thing.

“As far as other books,” continued Foley. “I’ve just been talking with Dean Miller of WWE about the possibility of doing another wrestling book, not something necessarily autobiographical, but something purely fictional that I’m thinking of calling Test Rules.”