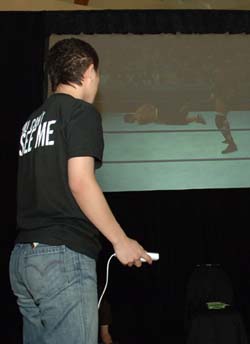 The game has many improvements over the 2007 version and creative designer Cory Ledesma of THQ touched on them all in a 20-minute presentation at the Atheneum Suite Hotel, just a few blocks south of Ford Field.

“We want to build on the success of the 2007 game,” said Ledesma, who designed the game along with fellow creative designer Bryan Williams. “This is a party game and we wanted to cater to our fans. I can’t emphasize enough how much we listen to the fans. We want to hear what you want so we can deliver that to you. We want you to be happy with your purchase.”

New to the 2008 model will be the presence of ECW, new fighting styles for all wrestlers, a struggle submission system, a 24/7 mode and upgraded animation.

Players will still have the option of creating their own wrestler and picking their arsenal, look, fighting style, etc. and “environmental hot spots,” i.e. chairs, tables, foreign objects have been upgraded.

For the submission aspect, players will now have the choice of going all-out with a lot of pressure on a submission move and trying for a quick submission, or they can start light and prolong the submission maneuver. On the flip side of that, wrestlers in those holds will have an option to power out. 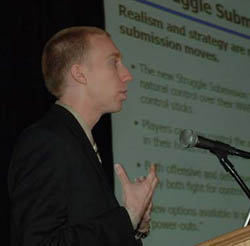 “It’s all manual analog control,” noted Ledesma. “We don’t want to have a player just sitting there watching the game. We want you to have ultimate control.”

In the new 24/7 mode, it will basically be like living as a WWE superstar. In other versions of this game, the ultimate goal was to get a title shot at WrestleMania. Now, the object is to attain WWE Legend status and enter the Hall of Fame.

“You’ll be able to manage wrestler’s fatigue, injuries, you name it,” said Ledesma of the 24/7 mode. “There will also be new storylines. This will be cool because if you’re The Undertaker, it might only take you six months to become a Legend because he’s so close. But if you pick a younger guy, it might take three years.”

With the reincarnation of the ECW name, that brand will get equal billing on the game along with Raw and SmackDown, said Ledesma. That, and to add to the parity, all three commentary teams will also be on the game.

Raw vs. SmackDown 2008 will be released on seven systems — Playstation 2 and 3 and Portable, Nintendo Wii, Nintendo DS, Xbox 360 and THQ Wireless — this fall. The PS3, Wii and DS versions will be those system’s debuts. 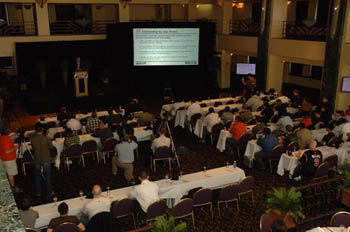 A live demo was given for the Wii version and it literally makes the players have to go through the motions of giving someone a bodyslam, power bomb or punch.

“This game is by the fans and for the fans,” added Williams. “We really pay attention to what the fans want.”