When you hear the term ‘Necro Butcher’, which means literally, ‘butcher of death’, it might convey a picture of a brutal, snarling beast of a man with a feral temper and a savage bloodlust. Strange, then, that the wrestler who goes by that name is actually soft-spoken, articulate, and a generally nice guy.

“Well, thanks a lot for saying so,” said Necro, real name Dylan Summers, after a recent show for Combat Zone Wrestling, his home promotion. “I appreciate that.”

The differences between Summers, the man, and the character he portrays has helped him enjoy a great deal of success in CZW and on the independent scene worldwide. The Butcher has wrestled in several countries, including the U.S., Canada, and Japan. He’s constantly in demand, and has wrestled for many promotions, including CZW, Ring of Honor, IWA, and several others. It’s a significant leap from his early years in the sport, when he once wrestled for nearly a year without seeing a dime.

“I started training in June of 1997, and had my first match on January 2, 1998,” he recalled for SLAM! Wrestling. “At first, I was just paying my dues, setting up the ring and carrying bags and that kind of stuff. I maybe got a hotdog and a Coke if I wrestled on the show. It was October 1998, and the Mongolian Mauler missed his flight; I got fifty bucks that night to take his place and wrestle. I wish I would have saved the cheque. It took a while to get the ball rolling, but things are cool now.”

Indeed, over the last few years, he has cultivated himself into an in-demand performer who fans love to watch. No doubt because of his ultra-violent in-ring tendencies, and his seeming willingness to engage in any kind of match, no matter how violent or crazy the stipulation.

Necro has become an ultra-hardcore icon, after having participated in several death matches, and his name was on the lineup of many of the more infamous shows of recent years, including several of CZW’s Tournaments of Death.

And while that career path has earned him the praise of many fans, it has earned him some scorn from the more traditional types. People who appreciate his hardcore style have compared him to a young Mick Foley, while others have simply labeled him as a ‘garbage’ wrestler. However, his detractors don’t seem to phase Necro much; certainly, he doesn’t feel like he’s going to stray too far from the path he’s started down.

“When you start your way down a path,” he mused about his career choice, “you see certain forks in the road. You see a particular fork where if you go down that way, certain doorways are going to be available to me and other doorways are not. Every decision has its good points and bad points. I made my decision.”

“Yeah, some things will never happen for me,” he conceded. “But I can’t complain. I’m just a dumb farm kid from West Virginia, but I’ve seen the world on someone else’s money. That’s not too bad at all.”

That said, he’s smart enough and realistic enough to know that it won’t necessarily be easy to keep doing what he’s doing in the long-term. That eventually, he may have to hold back on doing some of the more crazy things he’s done in the past.

“What you do in the ring changes as you get older anyway, no matter what. The wear and tear you put on your body, you always have to change whatever your game plan is to accommodate however you’re getting by. I think I’m doing okay doing what I do right now. If it’s not fun for me anymore, or if people won’t pay me to do it anymore, then I guess I’d better hang it up. But they’re still paying me, and I’m still having fun, so I’m not going to quit anytime soon.” 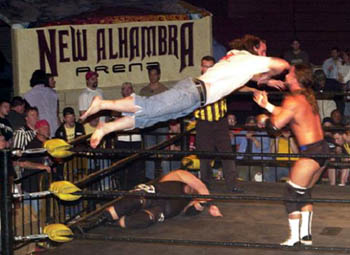 The Necro Butcher flies through the air at a CZW show in June in Philadelphia.

When he does eventually give it up — which may be for some time yet, as he’s still only a young man at 32 — Butcher hopes he will remain in the wrestling industry, possibly in a booking capacity.

“I would love it,” he said. “I helped out with a weekly show down in Evansville, Indiana, I helped book that show for the better part of a year. It was a lot of fun. It’s very fast-flying — running out to see what the attendance was, asking what the concession sales were. Right now, it’d be too hard to do it while still wrestling all over the country three or four nights a week. I’ve got to concentrate on one show, one match at a time, rather than worry about (the full show), who’s wrestling who and why. But if I’m ever forced to quit wrestling before I want to, I hope I’d get the opportunity to (work in the office) again; it’s very satisfying”

In the meantime, he’s just enjoying going out to the ring and putting on a show the only way he knows how, and hoping the fans continue to be entertained. Whether Canadians will have a the chance to see him do this live remains to be seen.

“If a promoter there wanted me, I’d come to Canada. If they call me, I’ll go. I wrestled in Montreal once and I had a blast. I’d love to come up to Canada again. The people there are great.”

“Bloodthirsty” Bob Kapur can now count the Necro Butcher among several wrestlers that he owes a beer to. Anyone looking to collect can e-mail him at [email protected].